Mystery Of Midnight Fires: Are Terrorists Targeting Sufi Shrines To Whip Up Tensions In Kashmir? 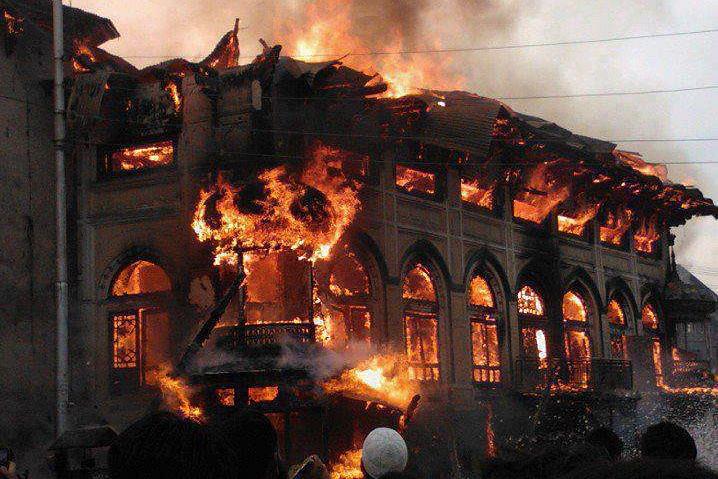 In June 2012, a 200-year-old Sufi shrine Dastageer Sahib in Srinagar became the victim of a similar “mysterious fire” (Source: Twitter)

Within a span of 10 days, two incidents targeting religious places have occurred in Tral in Pulwama district of Kashmir.

In the night of 25-26 November, “miscreants” set fire to the shrine dedicated to Mir Syed Mohammad Hamdani — a Sufi preacher. Reportedly, the shrine was partially damaged while a mosque, specific for women, was completely gutted in the fire.

The shrine, revered by the local people, is believed to host the relics of Hazrat Abu Bakr, one of the close companions of Prophet Muhammad.

The “mysterious fire” provoked a night-long protest by the locals. However, the situation didn’t take a turn for the worse as peace was restored thanks to a swift response by the administration — from the fire brigade personnel who controlled the fire to the Lt-Governor Girish Chandra Murmu’s statement directing immediate repair and restoration of the shrine at government expense.

Two days before this incident, “miscreants” threw flammable liquids on the shops in a three-storey textiles and readymade garments showroom in Baramulla. The “mysterious fire” destroyed everything.

On 17 November, there were alleged incidents of desecration Quran copies, damage to mosques and shrines at Dadsara, Amirabad and Sangrama areas of Tral and also an attempt to set a mosque on fire at Amirabad.

While the police investigations haven’t yet ascertained the hand of any particular group or the motive behind the arson, these incidents “mysterious fires” remind one of similar cases of fire destroying Sufi shrines close to a decade ago.

While the head of the shrine claimed that the sacred relics were saved from the fire, the wooden structure was quickly and completely gutted.

By November, at least six Sufi shrines were similarly damaged in “mysterious fires”.

Since the rise of Salafi or Wahhabi form of Islam in Kashmir, its Sufi traditions are facing the heat. The former criticise the Sufis as practising an ‘impure’ form of Islam (rather, polluting Islam) with practices like celebration of the birthdays of Sufi saints, praying at their shrines et cetera.

According to the Salafis, many of the Sufi practices are un-Islamic and constitute shirk (polytheism or idolatry, which are punishable crimes under the Shariah law).

Writing about the fire at the Dastageer Sahib shrine in Srinagar, Kashmiri journalist Tariq Mir says, “As mourners outside the burning shrine cursed the Salafis for creating an atmosphere of hate, some Salafis began posting incendiary messages on Facebook, terming the destruction of the shrine a “divine act of God.”

Sufis and their practices are also hated because they derive from Hindu mythology and practices, and for the same reason, Sufis are often suspected of being traitors and on the side of the “infidels” and “outsiders”.

However, aside from certain practices and victimisation due to Salafist Iconoclasm, Sufis share another interesting aspect of Hindu persecution — both Sufis and Hindus are criticised as weak, passive and effeminate in contrast to the strong and muscular men of Islam.

Mir quotes a recent convert of Sufism to Salafism in Kashmir as saying that the Salafi ideology would rid Kashmir of the “taint of meekness and pacifism”.

This “taint of meekness and pacifism” of Hindus was the justification used by the Islamic invaders for the loot of their wealth, homes and women — as only the strong and the mighty are worthy of enjoying these.

In 1990s, announcements were made from the mosque loudspeakers asking Kashmiri Pandits to either convert to Islam, or flee, but leave their women behind to be enjoyed by the deserving ‘victors’.

What fuels radical Islam in the Valley?

According to various reports, after 1947, Salafist preachers spread across Kashmir and Salafism / Wahabbism have grown rapidly.

One channel of spreading Salafism / Wahabbism is the radical Islamists smuggled into the Indian territory by Pakistan.

Reportedly, these Islamists, after being caught, tried and sentenced, made the Indian prisons their teaching grounds, and radicalised en masse the lumpen elements lodged in jail for other crimes. This way, a potent mix of criminality and radicalisation is produced.

Reportedly, the Salafi reading materials and books for the purposes would also be easily available in the prisons, and the prison officials would make available the items on the list given to them by the Jihadists.

This points to a nexus between the Jihadists and the more mainstream Salafist channels — madrassas, “charitable organisations” and mosques — in front of which a government official would find himself powerless.

Interestingly, similar reports of jail being the target of Islamists for proselytisation as well as radicalisation of the inmates have come from faraway countries like UK.

Therefore, apart from the militants and terrorists who radicalise, recruit, and carry out the “dirty work”, radicalisation also spreads through the “mainstream channels”.

Asit Jolly, in a 2011 India Today article, ‘The Wahhabi Invasion’ notes hundreds of mosques and madrassas financed by Gulf money operating in the Valley.

The money is routed through religious and charitable organisations which not only provide the Salafi materials, but also technological aids, gadgets and satellite televisions to spread the ideology.

They also finance the local youth to go study at the Islamic universities in the Gulf. Upon their return, many of these Islamic scholars adopt Arabic-sounding monikers to flaunt their closeness to Saudi Arabia, the birthplace of Islam, and occupy high positions.

As several scholars have pointed out, be it Afghanistan, Pakistan, India or Europe, the use of mosques and madrassas to radicalise children and youth is more of a rule rather than the exception. It isn’t without a reason that the term ‘Taliban’ in Pashto means “students”.

Jolly also notes that Kashmir’s predominantly Sufi community is anxious over increasing popularity of Salafism among the youth.

In Kashmir, Sufis aren’t the only ones threatened by the rise of Wahhabi Islam.

The Shia community has also felt the noose tightening around their necks with the rise of Salafism (Kashmir has a history of terrible plunder and violence against Shia populations). The Moharram processions on Ashura have been banned in Kashmir since 1990 for fear of Shia-Sunni clashes.

Abhijit Iyer-Mitra, in a September 2019 article in The Print notes the closeness of Shia community members with the “Hindu” CRPF Jawans.

He also says that the abrogation of Article 370 was welcomed by the community-members who hoped that they would again be able to practice their religion freely.

Shias, like Sufis, are also suspected of being informants, traitors and on the side of the “infidels”.

On the side of the “infidels” or not, Shias and Sufis both have good reasons to believe that their persecution will intensify if the radical Islamist movement gains an edge over New Delhi in Kashmir.

In an independent Kashmir ruled by the Islamist Sunni majority, both the communities would most likely be the first targets of Islamist violence, as the example of Pakistan shows.

It is reasonable to assume that the terrorists in Kashmir, who are already targeting innocent shopkeepers, traders and students, will increasingly target the places of worship to incite violence.

Such incidents produce sufficient chaos, and the terrorists don’t risk losing their lives. For example, the above-mentioned 2012 Srinagar fire incident was followed by violent protests, including stone-pelting.

Reportedly, people flocked the streets around the temple, chanting anti-India slogans and demanding freedom from Indian rule. The protesters also called for a statewide strike over the government-handling of the incident.

The protesters alleged that firefighters weren’t well-equipped and that state police force couldn’t be trusted with the investigations (minority Muslim communities in Kashmir often accuse the local police of being biased in favour of Sunnis).

Separatist leaders also jumped in on the protests. Thus, an alleged act of arson, most likely by radical Islamists, turned into an anti-India affair.

The administration will have to be vigilant against such conspiracies, and cultivate trust among the people that unlike 2012, the "miscreants” will be brought to justice.