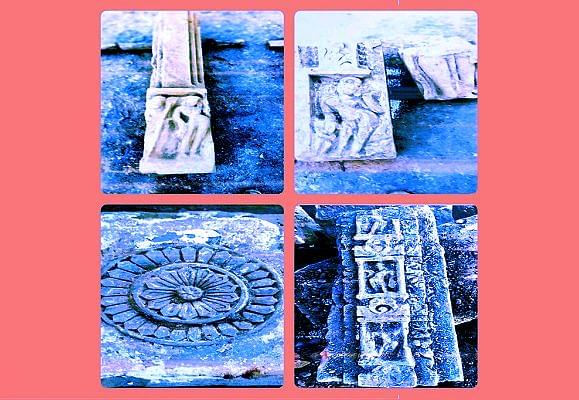 Based on the Supreme Court’s final judgement on Ayodhya Ram Temple, Government of India organised a trust namely Shri Ram Janmabhoomi Tirth Kshetra Trust for the construction of the temple at the previously disputed site.

The dispute pertained to whether the site originally had a mosque or a mosque built upon existing non-Islamic structures.

Supreme Court’s judgement relied heavily on the judgement given by Allahabad High Court.

The Trust, as per media reports, found ancient idols, pillars and shivlings while excavating the site on 20 May 2020.

“We have discovered pillars in the debris of the structure and carvings on sandstone,” announced general secretary of the trust. We found a Shivling there and a similar one at Kuber Teela,” he added.

A five-foot Shivling, seven pillars of black touchstone, six pillars of red sandstone, structures with Indic motifs and broken idols of deities were reportedly found at the site.

These finds are not surprising or path-breaking, except in the background of the intellectual dishonesty of “experts”, most with open communist ideological bent, who opposed the Ram Janmabhoomi movement.

Now that the Hindu symbols and idols have been discovered under the site, it has become extremely important to revisit what “eminent intellectuals, historians and archaeologists” had said previously.

Dhaneshwar Mandal, professor at department of ancient history and archaeology, Allahabad University, had written a book namely Ayodhya: Archaeology After Demolition which was published in 1993.

In the book, Mandal criticised the excavation done by Archaeologist B B Lal. The book was used as a reference for arguments against the Ram Janmabhoomi. However, in the court, he admitted that he “never visited Ayodhya”.

He said that he had not seen the disputed site as yet, and didn’t do any physical examination of the stones.

“It is true that I am of communistic thought,” Mandal said, revealing his ideological leaning. Additionally, he said that he didn’t have any degree or diploma in the field of archaeology (Paragraph 3,628, volume 15 of Allahabad HC judgement).

Not surprisingly, the court noted that “the entire opinion of this witness is short of the requirement under Section 45 of the Evidence Act, 1872, to qualify as an opinion of an expert.”

In 1991, professors including R S Sharma, M Athar Ali, D N Jha and Suraj Bhan had published Historians’ Report to the Nation in which they argued that “the full blown legend of the destruction of a temple at the site of Rama’s birth and Sita ki Rasoi is as late as the 1850s. Since then, what we get is merely the progressive reconstruction of imagined history based on faith.”

While in the court, Bhan accepted that they were given only six weeks’ time for the entire study, in his own words, he said, “pressure was being repeatedly exerted; so we submitted our report without going through the record of the excavation work by B.B. Lal.” (Para 3,615, vol. 15)

A few questions here remain unanswered: under whose pressure a proper study was not conducted? What may be the motives behind this pressure?

Another such professor is Supriya Verma who appeared as an archaeologist on behalf of Wakaf Board.

The Wire had published an article based on her interview, headlined “Archeologist Who Observed Dig Says No Evidence of Temple Under Babri Masjid.”

In the article, she was quoted as saying, “underneath the Babri Masjid, there are actually older mosques.”

The Wire republished the article again on 8 November when the judgement was delivered.

However, in the court, she accepted that she was not present when the structure was exposed nor had she ever visited the place thereafter.

But she gave an opinion based on the information given by “experts” D. Mandal, Ratnakar and Suraj Bhan. (Para 3,933, vol. 17)

In short, Prof Verma had come to her conclusions based on the information given by “expert” Mandal, who neither had a degree nor a diploma in archaeology.

The court had also disqualified him as an expert on the subject.

These are just a few examples of how “experts” lied on the Ram Janmabhoomi issue.

Not only did intellectuals committed to a particular ideology mislead the people of India and wasted their as well as the court’s time with concoctions, but they also harmed the social fabric of this country.

Now these “intellectuals” stand completely exposed, but will this be enough to stop them from lying, and creating false narratives for ideological goals?

If not, for how long will the country keep paying the price for the dishonesty of these supposed guardians of truth?