The Bullet Train Project Can Potentially Transform Our Railways Ecosystem 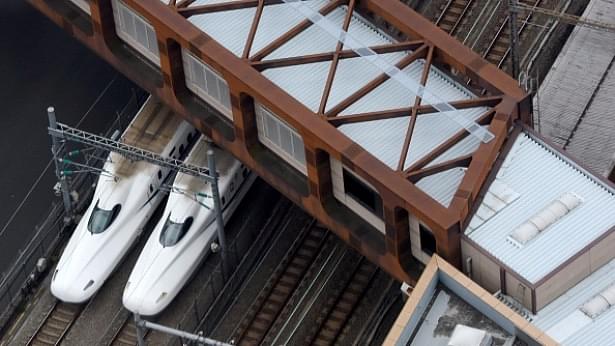 A pair of Shinkansen trains are seen under a pedestrian overbridge in Tokyo. (TORU YAMANAKA/AFP/Getty Images)

Prime Minister Narendra Modi and his Japanese counterpart, Shinzo Abe, will be laying the foundation stone for the Mumbai-Ahmedabad bullet train project on 14 September. In its size, scale and sweep, this project is probably the single largest foreign direct investment into India since independence. Expected to cost approximately $15 billion (Rs 90,000 crore), it is fully funded by the Japanese through a soft loan at an interest rate of 0.1 per cent per annum.

Modi has ensured that repayment of this loan is to begin after 15 years and to be repaid over the next 35 years. What makes this loan arrangement attractive is that even loans from multilateral agencies come with more stringent terms. The low interest rate and extended repayment period have the calculated effect of addressing upfront any potential economic downsides in the project.

Besides this sweet deal, the project has significant geopolitical ramifications. At the outset, it signifies the dynamics of the Indo-Japanese relationship and the confidence Japan has on India in general and the Modi government in particular. This in turn will draw in future investments into India from foreign countries on several such projects.

More importantly, the terms of any investment into India, private or government, will henceforth be benchmarked against the terms of this project. Anyone funding projects in India on interest rates above 0.1 per cent and for a term of less than 50 years will surely raise eyebrows. What is especially astonishing is that for the first time since independence, one sovereign nation has invested so heavily in India on such favourable terms for the latter and for such extended periods. Obviously, the Japanese have more faith in the Indian economy than probably some of our own economists. The glass ceiling has well and truly been broken.

But that is not all. If the economics and geopolitics of the project bring about the ‘make in India’ angle, the technology transfer along with the ‘make in India’ commitment by the Japanese make the project a possible pivot to the entire Make in India campaign. According to experts, the significant fallout of this project would be on this ambitious national project.

As per the agreement between the two governments, this project has well-defined ‘Make in India’ & ‘transfer of technology’ objectives. Consequently, it is understood that four sub-groups with representatives from the Indian and Japanese industries are closely working to identify potential items and sub-systems to ensure that the project has a significant Make in India component. In this connection, the Indian government and the Railway Ministry are encouraging active interaction between the industries of India and Japan. Industry sources believe that quite a few joint ventures will be formed in the near future to ensure manufacturing within India for the project. A significant impact of this will be a quantum leap in the technology available to Indian Railways apart from the change in work culture.

Readers may recall the car manufacturing revolution ushered in by the Maruti-Suzuki tie-up in India in the early 1980s. In just 30 years, India has emerged as a global giant in automobile manufacturing. Today, it not only manufactures world-class cars but also exports to advanced countries, and some of them are domestic brands competing with the best internationally. Only those who have witnessed the rapid transformation of the Indian automobile industry in the past three decades will appreciate this transformation.

Likewise, the bullet train project is expected to revolutionise the construction sector in India by bringing in new technology and work culture. To absorb the desired cutting-edge technology and train adequate manpower, a world-class High Speed Rail Training Institute is being simultaneously planned and developed in India. Expected to be fully functional by the end of 2020, this institute will train about 4,000-strong staff in the next three years, who will, besides being involved in operations and maintenance of the project, also serve as the backbone for future development of other high-speed corridors in India.

Let us also not forget that Indian Railways has been a fiefdom of successive railway ministers and a grim reminder of the failed Nehruvian economics. The upcoming bullet train is all set to alter the functioning of Indian Railways. Currently, the speed of our trains, its cleanliness, and safety records are abysmal. A transformation requires a cultural transplant. And it is getting it through the introduction of the bullet trains. Hopefully, the cross-fertilisation of ideas with the Japanese will transform this moribund organisation into a world-class unit not too far in the future.

Of course, the usual suspects seek answers to the very same questions that they raised when computers were introduced in the late 1980s. The answer to that came from the ordinary Indian within a decade or so, as India became a superpower in computers. Again, people raised questions about the introduction of mobile phones and termed it elitist. But mobile phones ensured the telecom revolution within a decade or so – what the landlines could not achieve in six decades. Today, we boast of a Digital India dream, thanks to the revolution in this sector. This, again, was possible, thanks to the ability of the ordinary Indian in absorbing new technology. At every turn, Indians have lapped up technology and profited from it.

Hopefully, Indians will embrace the bullet train technology too, which in turn is expected to spur manufacturing in India while simultaneously strengthening the Indo-Japanese relationship.

Also Read: What The Mumbai-Ahmedabad Bullet Train Means For The Region