The Truth About Agra Woman Who Was Accused Of Escaping Coronavirus Quarantine Facility, And Shamed Online 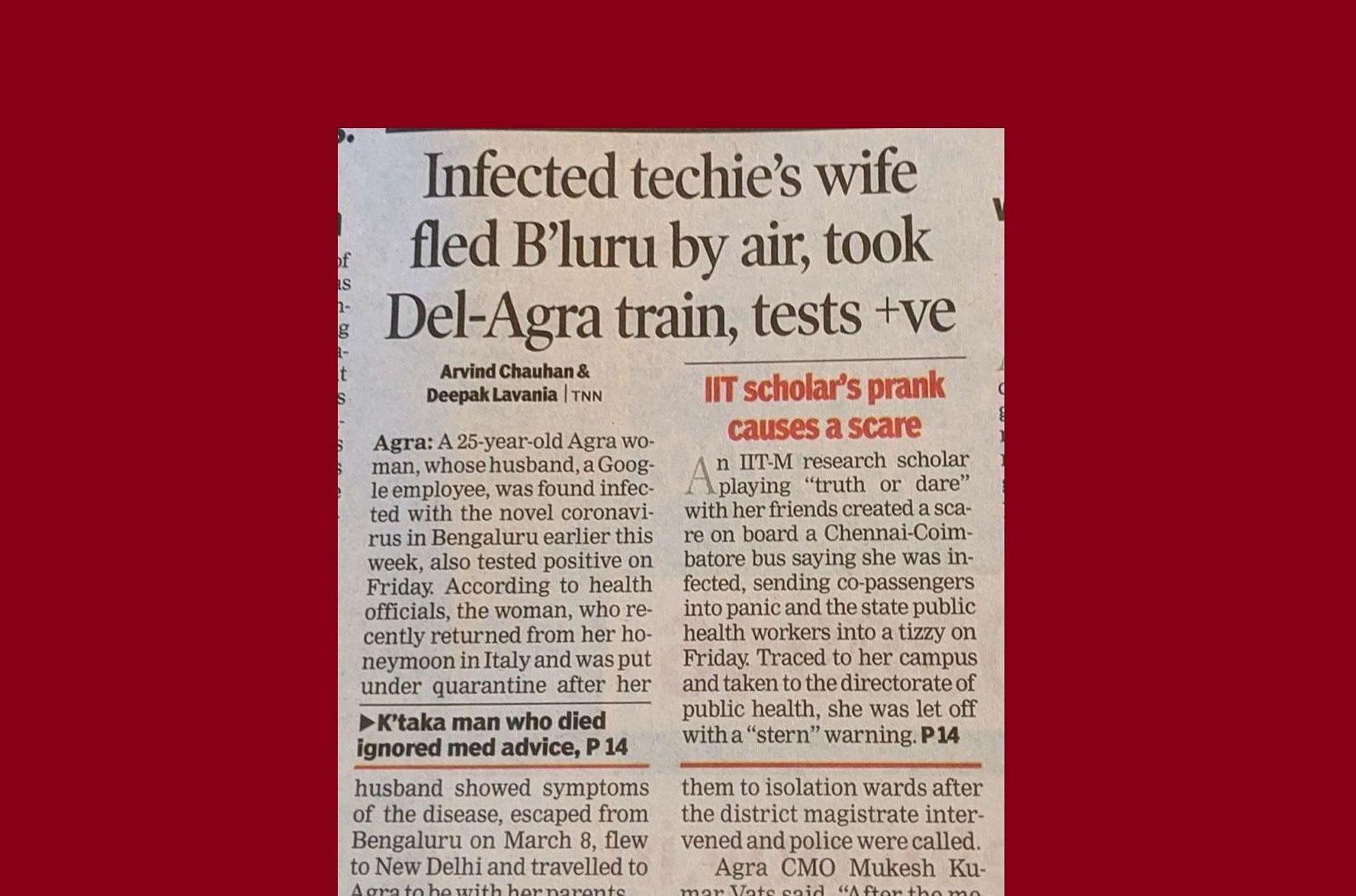 Yesterday (14 March 2020), The Times of India (TOI) ran a report titled ‘Infected techie’s wife fled B’luru by air, took Del-Agra train, tests +ve’. The report was filed from Agra and was carried in both print and online platforms of the news agency.

The report quoted health officials as saying that the wife, who had recently returned from her honeymoon in Italy and was put under quarantine after her husband showed symptoms of the disease, escaped from Bengaluru on 8 March, took a flight to New Delhi, and then went to Agra to be with her parents.

The first version of the report said that the techie (to be referred to as Mr. H from here on) had been tested positive for COVID-19 (coronavirus) on 7 March. The dates, as the disclaimer on the updated digital report suggests, came from the Agra health officials. The updated report says that Mr. H, a Google employee, was tested positive on 12 March. The last update to the report was made at 22:05 IST on 14 March.

The report also accused the wife of Mr. H (to be referred to as Mrs. H from here on) of resisting the attempt of the health officials to take her and eight other family members to isolation wards, and it was only after the intervention of the district magistrate and police force that Mrs. H could be taken to an isolation ward along with her family members.

Further, the report also stated that the father of Mrs. H, a railway engineer, refused to cooperate with the team of health officials and also lied that his daughter had left for Bengaluru.

The other details included the couple’s return date, 27 February, from their honeymoon to Italy, Greece, and France. On 7 March, the report states, that the husband tested positive, and they both were quarantined in Bengaluru. Mrs. H, as per the same report, returned to Agra on 8 March.

Filed from Agra, the report was first accessed by this correspondent on Saturday morning. A clipping of the newspaper report had started going viral on social media, especially on Twitter. At the time of writing this article, the report has more than 1,350 comments, almost all of them demeaning and disrespectful.

Among other things, many social media users called for the arrest of Mrs. H. Some even demanded the invoking of Section 3 of the Epidemic Diseases Act. Other remarks online ridiculed the couple for their irresponsibility and callous attitude.

Late on Saturday, Swarajya reached out to the younger sibling or Mr. H. In a phone conversation with this correspondent, the brother of Mr. H (to be referred to as Mr. J from here), discussed how the family had been shaken by the reactions online, and how the chronology of events being reported was completely false.

Mr. J spoke with Swarajya on the condition of anonymity, and for the security of their family, no personal information shall be disclosed in this report.

The couple got married sometime in mid-February. The correspondent learned that the couple travelled to Athens, Greece, from Delhi for their honeymoon on 23 February.

As per Mr. J, the couple travelled to Greece, Switzerland, and France, and took a flight on 6 March 2020, from Paris, France, to Mumbai. The flight had a small layover in Munich, Germany.

Mr. J emphasised that the couple, his elder brother and sister-in-law, had never gone to Italy in the first place, as reported. Also, they had returned to Mumbai, India, on 6 March midnight, while the TOI report stated the couple had returned on 27 February.

On 8 March evening, the couple took a flight from Mumbai to Bengaluru. The flight was to land at 9:45 pm in Bengaluru. Until then, Mr. H exhibited no signs of flu whatsoever.

The couple didn’t leave the airport, as Mrs. H was scheduled to leave for Delhi from the Bengaluru airport at 01:40 am (9 March), only a few hours later.

Mr J told Swarajya that the couple, given the excessive luggage from their honeymoon, decided to fly together to Bengaluru, instead of Mrs. H directly leaving for Delhi.

Mrs. H was leaving for Agra to be with her family for her first Holi after marriage. It is a prevailing tradition in many parts of the country where the girl spends her first Holi not at her in-laws, but at her parents’ place.

Against what was stated in the TOI report, the couple never left the Bengaluru Airport, and thus did not escape any quarantine facility. Mr. H returned home after his wife departed for Delhi. Until then, he showed no signs of any fever.

On Monday (9 March) morning, Mr. H returned to work at his office in Bengaluru. The same morning, Google conducted an internal screening process where they did not permit anyone with a temperature higher than normal to work. Mr. H passed this process and was allowed into the office premises.

However, he started complaining of a headache a few hours later. Attributing the condition to lack of sleep, he returned home merely three-four hours later. By evening, Mr. H was running a high fever. Mr. J helped his brother with some basic medicines for fever, believing it was another routine flu.

Even on the morning of 10 March, the high fever persisted. Mr. J, speaking to the manager at his workplace, thought it would be ideal to get his brother screened for COVID-19, as by that time, the news of the virus outbreak was making headlines.

Mr. J accompanied his brother to the Rajiv Gandhi Institute of Chest Diseases in Jayanagar, Bengaluru. In the evening, Mr. H, voluntarily, submitted the necessary samples for testing. Mr. H was told by the health officials that the results could take upto 72-hours as the samples are sent to Pune.

However, they were also told that they would be reached out to within 24-hours if anything risk worthy was found in the testing.

On the evening of 11 March, Mr. H got a call from the doctor who told him that he was being moved to a hospital as they were suspecting him to be positive for COVID-19. However, a confirmation of the same was not shared with them at this point.

By 11 March late-night, Mr. H was admitted to the Jayanagar General Hospital. Mr. J, who stayed at home, was asked to be in self-quarantine and report if he too suffered from any symptoms. By 12 March noon, the family had the confirmation of Mr H. being tested positive for coronavirus. His vitals were checked and he was put under observation.

By this time, the medical team in Agra had swung into action. They reached Mrs. H and requested her and her family to accompany them for testing. However, upon reaching the premises, Mrs. H, to her dismay, discovered that the place was filthy and reeking of bad smell.

Mrs. H was in Agra on 9 March itself while her husband, as per the updated report of TOI (and as confirmed by Mr. J), Mr. H. tested positive on March 12.

Health officials in Agra allowed Mrs. H and her family to return home and be in isolation. Her first samples were collected on 12 March.

The next day (13 March), the health officials returned to her place and requested her and the family to accompany them to the isolation ward. Mrs. H, knowing the hygiene conditions of the facility, resisted.

However, while Mrs. H was moved to a better facility, the family was required to move to the same ward. While Mrs. H’s first test, conducted on 12 March afternoon, was inconclusive and showed no signs of her being positive for COVID-19, a second test was conducted on 14 March, reports for which are awaited. Her family has tested negative for COVID-19.

In a letter, dated 13 March, accessed by Swarajya, and issued by the office of the district collector of Agra, it is stated that the health officials in Agra collected 12 samples out of which 11 tested negative. The results of the 12th sample were kept pending. The letter also mentions that the husband of the woman is an IT worker in Bengaluru, and was tested positive for COVID-19, due to which the wife (Mrs. H) was asked to remain in self-quarantine.

The letter states that Mrs. H, despite knowing the condition of her husband, traveled to Delhi on 9th March, ignoring the stated protocols and jeopardizing co-passengers along the way on the flight from Bengaluru to Delhi, and the train she took from Delhi to Agra.

The letter continues, stating that when health officials reached the residence of Mrs. H on March 13, her father told the officials that she had left for Delhi via a train and was later going to take a flight to Bengaluru.

This resulted in swift action from the officials including tracking of the train, the government of Uttar Pradesh had to be informed, and assistance of the state police had to be also used. However, eventually, it was found out that Mrs. H was residing in Agra only. The false claim of Mrs. H’s father resulted in elaborate yet futile operations of the health officials and district administration.

The letter, signed by the district collector, highly recommends an official inquiry against the father of Mrs. H for his false claim. However, the letter makes no mention of the final testing status of Mrs. H.

The TOI report, however, blames the couple for being irresponsible and singles out Mrs. H for flying from Bengaluru to Delhi after escaping a quarantine facility. However, as per the sequence of events shared by the family, Mrs. H did not leave the Bengaluru airport and her husband (Mr. H) did not test positive for COVID-19 until 12 March.

At the time of writing this report, Mrs. H, rattled by the hate she, her husband, and her family received online.

On Monday (March 16) morning, Swarajya, in a brief conversation with Mr. J, learned that Mrs. H had been tested positive for COVID-19.

Mr. H, meanwhile, is stable and is undergoing treatment.