What Is More Harmful For JNU - Mao And Stalin On Library Wall Or A Decommissioned Tank? 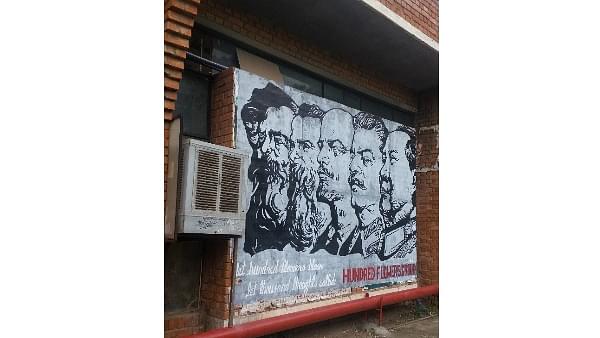 As Indian soldiers guard against the invasive People’s Liberation Army (PLA) on Doklam plateau, Jawaharlal Nehru University (JNU) is still host to the founder of the Chinese military.

A giant graffiti of Mao Zedong remains perched on a characteristic red-brick wall of JNU. He was the father of the Red Army – precursor to the PLA – and also the architect of a slaughter called the Great Proletarian Cultural Revolution (1966-76). It killed at least 500000 people – more than half of Bhutan’s population. Under Mao, China set upon unarmed Tibet – territorial violation that the country has pursued like ‘foreign policy’ against others as well. South Asia is a nuclear tinderbox today because Mao started ‘political’ investments in rogue states such as North Korea (1950) and Pakistan (1963). China then inked a sordid history of nuclear proliferation with KimJong Un and AQ Khan.

Next to Mao in that 10ft x 8ft poster is Joseph Stalin. The communist dictator terrorised the Soviet Union throughout his reign (1922-52). The most conservative estimate of his massacres is nearly double of Mao’s brutalities. Perhaps the only parallel to his Great Purge is the Nazi Holocaust. Not surprisingly, Stalin and Hitler had entered into the German-Soviet Non-Aggression pact (1939) to protect themselves from mutual belligerence. It allowed them to channelise their energies on territorial expansion in East Europe. Hitler broke the alliance which led to World War II just two years later. Had the agreement prevailed, the planet would have had to deal with the ferocious duo of Stalin and Hitler.

If such mass murderers and warmongers can grace the walls of the sanctum sanctorum in JNU – Central Library, why can a decommissioned tank not find place somewhere in one of the largest university campuses? After all, no Indian tank has ever infringed borders for territorial expansion or taken aim at civilians unlike Chinese ones at Tiananmen Square (Beijing, 1989) or Soviet ones at Šafárikovo Square (Bratislava, 1968). It has only defended lines of control and allowed a nation to live within their safe confines.

No doubt that the idea of military hardware on campus is uneasy. One must examine if tank and talk can coexist in a university. But is it possible to talk in JNU?

After the release of Baahubali II in April, the media analysis website – The Hoot – published my critique of film critics and their fanciful tirade against the two-part film. Of course, Baahubali can be put under the microscope. But the evaluation cannot be far-fetched just because it uses Hindu motifs. Based on facts in the mis-en-scène; I argued that quixotic accusations of class insensitivity, caste prejudice, tribal stereotype and gender discrimination reflected orientalist bias of the film critics – an affliction which still plagues Macaulayian-communist circles in India. And then, I ‘dared’ to share the brief essay with the email group of research students at my department.

The attack started with the charge of “self-promotion”. Suggestion of “You can send to people who are interested in reading your piece” followed. Another complained, “There is too much spam because of this”. Somebody stomped, “… refrain from posting whatever bylines”. Next arrived, “This is becoming very irritating.” Then came, “… tired of your toxic views …” One blackmailed, “I would like to unsubscribe … if these discussions continue here”. And finally, “Can we have a second group …?”

But this was the most enlightening, “… we academic people make an effort to be on the right side of history. Being click baity (sic) contrarian is not interesting. Try something new?” Since then I have searched libraries for a book that confirms the “right side of history”. Anybody who has it please let me know.

The threat from the apparatchiks was clear: if you dare to contest our “right side of history”; we shall socially boycott you, we shall spatially segregate you, we shall alienate you and we shall cast your voice outside the echo chamber of JNU. Here we shout only-we-decide-what slogans of ‘azadi’ and ‘barbadi’. Here we venerate Mao and Stalin à la “Chiner Chairman Amader Chairman” (‘Chairman Mao is our Chairman’ was the slogan of the Bengali communists at the height of Cultural Revolution).

I shudder to think what would have happened if Mao and Stalin were alive in the JNU portraits. You would have had the remote chance to discover my words in a Stalinist purgatory where I were sure to be delivered by university ‘students’ called Red Guards. They were Chairman Mao’s killing machines whose user manual was Mao’s Little Red Book. I were to be purged because just like my fellow researcher, they too believed that they had access to the “right side of history”. Very unfortunately, the malaise is spread outside JNU too. Here thuggish groups cannot engage with fictionalised accounts of Alauddin Khilji and Rani Padmavati but fictionalise the history of the Battle of Haldighati (1576).

Thankfully, daily encounters with the sinister types are assuaged by interactions with a handful of open-minded peers and some excellent teachers on either side of JNU’s Left-Right divide. But why the intolerance inside JNU? Professor Makarand J Paranjape has indicted “… patronage and propaganda that nurtured it. The formula was simple: keep fees ridiculously low, remove attendance requirements, fund all or as many students as possible … ensure that the “true” history of communism is never taught … rewards on offer [include] fellowships, admissions to foreign universities, eventually jobs – all for toeing the Leftist line. You could join the comfortable bourgeoisie by making a career of criticising it.”

Here is an instance of what is on offer if the red line is stuck to. Right after pro-terrorism slogans on campus last year, JNU Teachers’ Association (JNUTA) handed over the 2016 Irom Sharmila Scholarship to JNU Students’ Union (JNUSU). The disregard for eligibility criteria, as outlined in the scholarship founder’s blog post, was total. The rules mandate that applicants must be from areas under “internal armed conflict”. JNUSU is in peaceful New Delhi. The eligibility criteria further lay down that the applicants must be postgraduates. JNUSU represents a sizeable number of undergraduates from BA programmes in the language school. But besides those rules, JNUSU has made no contribution that can be recognized as academic research. On a fair note, JNUSU is not tasked to do so. Finally, since it was not eligible; did JNUSU apply for the scholarship at all?

The tank remark and the debate over it is much ado about nothing. The May 2016 UGC Notification may have made admission to research programs necessarily strict. But the rot runs deeper. Administrative mechanisms must guarantee intellectual freedom and check nepotism in JNU. Right now there is little to protect in the university – tank or no tank.