What Led To The Demolition Of Babri Masjid 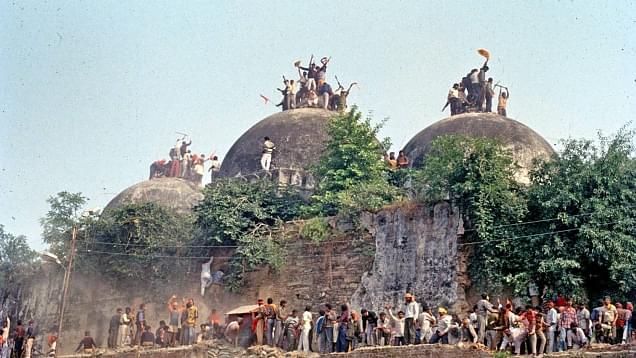 At the end of a history workshop covering the Ayodhya issue last weekend, one of the participants asked the history professor delivering the talk: "If there is such incontrovertible evidence in favour of a case for Ram temple, wouldn't it have been better for the temple party to wait rather than suffer the ignominy and taint of demolition which occurred on 6 December 1992?"

The reply to this sensible question - which was also bothering so many others in the room - summed up the evident truth about the demolition of Babri Masjid. The historian, who was in no way party to the dispute, nor ideologically blind, but a scholar par excellence, grimly observed that given the state of affairs, it was tragically the only course the buildup might have led to. It wasn't something the historian would have wished for, but an eventuality, many discerning people could see coming.

At a time when the Supreme Court has restored criminal conspiracy charges against top Bharatiya Janata Party (BJP) leaders in the Babri Masjid demolition case, it is necessary to discuss once again the follies of Indian polity and governance, which led to the demolition in the first place. The demolition of Babri Masjid was as much a consequence of kar sevaks gone berserk as the failure of the judiciary to live up to its call of duty. For an issue so emotive so as to form the core of their religious and cultural existence, the aggrieved Hindus saw no signs of movement in the wheels of justice, all the while continuing to be mocked, teased and taunted by Marxist and "secular" intellectuals and politicians.

Janmasthan in Ayodhya is one of the oldest pieces of land under litigation. However, it is no ordinary title dispute. It is rather, an expression of the fervent desire of crores of people to regain the civilisational soul of the nation. And yet, despite five cases filed since Independence alone, there appeared no serious movement towards a resolution. In fact, the judiciary was always seen dragging its feet. It is not only in 2017 that the courts advocated an out of court settlement. In 1955 also a suggestion to this effect was made. Simple appeals such as the one challenging the suit filed by the Sunni waqf board as time barred lay pending for years.

Writing a few months before the demolition, Arun Shourie observed: "When the acquisition of the land by the UP government was challenged last October/November, the impression was given that the Supreme Court and Allahabad High Court would settle the matter by 15 December 1991. We are in July 1992, and even the hearings have not concluded yet" (Ayodhya: Some Interim Lessons).

After the second kar seva was declared by Vishwa Hindu Parishad (VHP) in July 1992, the government assured disposal of the case within three months. The Supreme Court itself announced the constitution of one bench to hear all the pending cases if kar seva was withdrawn. VHP relented by keeping kar seva symbolic and restraining kar sevaks from singing bhajans and keertans. However, after the three-month period had lapsed once again and no solution appeared in sight either through negotiations or through courts, another kar seva was declared on 6 December.

The Allahabad High Court came up with 11 December as the judgement date. In view of the strongly charged atmosphere and a nation-wide agitation, fervent pleas were made by the Rashtriya Swayamsevak Sangh (RSS) and BJP leaders to advance the judgement by a week. The Supreme Court responded by saying that courts would not work under any pressure. (It is another matter that the Supreme Court hastily convened a meeting of judges, much after the working hours, in the wake of the demolition). Coming after a flip flop by the earlier V P Singh government, which went back on a proposed ordinance to grant the surrounding land to a VHP-led Nyas, and seek an early disposal of the disputed land by Supreme Court, the 11 December date didn’t evoke any confidence in the kar sevaks.

Writing in the Indian Express dated 27 December 1992, senior BJP leader L K Advani blamed the demolition on the "lack of a firm commitment in the general masses to the Rule of Law, and an exasperation with the frustrating sluggishness of the judicial processes."

Sudheendra Kulklarni, who hadn't joined BJP yet and was a journalist with Observer, was also not ready to hold kar sevaks alone as guilty. In a column titled "Ayodhya's Positive Fallout", dated 25 January 1993 Kulkarni wrote, "However shrilly their critics may denounce them as vandals, and however unfortunate their unlawful deed may have been, the Kar Sevaks who demolished the Babri Mosque structure and erected a temporary Ram Temple at the site served to shift the equilibrium toward an axis more in alignment with the true identity of India."

With little hope of an early judicial solution, the aggrieved Hindus were simultaneously being subjected to ridicule and scorn from the Leftist crowd. Laloo Yadav asked "Kya Ram wahin gadhe huve hain?" (Is Rama buried on that exact spot?) Sahmat organised an exhibition in which it depicted Rama and Sita as brother and sister. Congress leader Arjun Singh happily graced the occasion. Marxist historians submitted "proof" of Rama's birth at seven different places.

These fanciful "discoveries" as places of Rama's birth from Varanasi to Nepal and Afghanistan to Egypt prompted Belgian scholar Koenraad Elst to sarcastically comment "that someone who has taken birth at seven different places was certainly able to take birth at yet one more place, viz. that hilltop in Ayodhya". For every probable inadequacy plaguing the country there was a Rama barb- "would a Rama temple rid India of its poverty?”, "would a Rama temple remove India's illiteracy? - as if all these deficiencies were absent when the temple remained locked. The Leftist calumny was one more round of molesting the Hindu psyche after the iconoclastic frenzy of medieval India.

Those who were following the events in early 1990s will remember how media started taunting BJP about forgetting Rama immediately after the party formed the government in Uttar Pradesh. The idea was to dare the party into fulfilling its promise with an intent to mock, secure in the belief that there would be no change in status quo. When the VHP assured the courts that kar seva would be restricted to singing bhajans and keertans, the media didn’t want the occasion to simply pass off that way. Eager to prove that the Hindutva warriors were no more than paper tigers, they were provoking the kar sevaks asking why they would travel all the way to Ayodhya only to sing bhajans.

In the demolition of Babri Masjid, the hands were those of kar sevaks but the fire and fury were that of an epochal force avenging the obduracy of an insensitive system refusing to acknowledge the humiliation of a civilisation. Freedom struggles worldwide, were hailed for uprooting colonial imperialism. But because of the chiefly political character of these struggles, the remnants of colonial imperialism have survived in the form of xenophobia and racism.

The struggle for Ramjanmabhoomi at Ayodhya is unique in having confronted Abrahamic doctrinal bigotry which lay at the root of colonial imperialism. Within the prolonged struggle of Hinduism against invading iconoclastic creeds, the battle for Janmabhoomi at Ayodhya is also Paganism's high point in its largely dismal historical record of resistance in the face of Abrahmic imperialism.

It is a sad state of affairs for a society, when mobs start dispensing their idea of justice, but it is also the duty of the various organs of a government, struck by inaction or hamstrung by political correctness, that they don't reach a point of failure. Despite the imagery associated with it, Ayodhya wasn't a movement of rowdies and lumpens. It drew academics, students, intellectuals and luminaries from various fields. Not one incident of rioting or violence was reported during the entire length of Advani's Rath Yatra. It must have taken something exceedingly obstinate to invite the fury of a patient man.

Entrenched firmly, this obstinacy granted Islamists to hold on proudly to the symbols of medieval barbarism. It allowed discredited Marxist historians who had been caught lying time and again to sermonise Hindus on how, when and whether to worship their gods or not. It commanded Hindus to swallow insults for the sake of secularism and forget the religious icons so incapable of removing their poverty. The debate oscillated between two extremes. At one end, Muslim sentiments were to be respected over whether a temple existed previously or not. On the other end, with the evidence of temple destruction staring in the face, faith nurturing its most sacred symbol became a retrograde idea to be denounced.

Should the demolition of Babri Masjid be bemoaned? Yes, because it was an act of vandalism but not because the oppressive structure is no more. The difference is that of legality and morality. The pulling down of symbols of oppression - from walls to statues - has been marked as momentous throughout history. And if one thought these did not include religious structures, here is one example. During the Czarist occupation of a predominantly Roman Catholic Poland, an Eastern Orthodox Cathedral had been constructed in the heart of Warsaw. After gaining independence in 1918, the Polish Government authorised the Russian Church to be pulled down.

Remembering the event, Arnold Toynbee spoke "I do not greatly blame the Polish Government for having pulled down that Russian Church. The purpose for which the Russians had built it had not been religious but political, and the purpose had also been intentionally offensive" (Azad Memorial Lecture: One World and India, 1960) - words which hold true for thousands of Hindu temples demolished by Muslim invaders and mosques erected in their place. Hindus have been demanding only one of them.