Why We Should Say No To NOTA 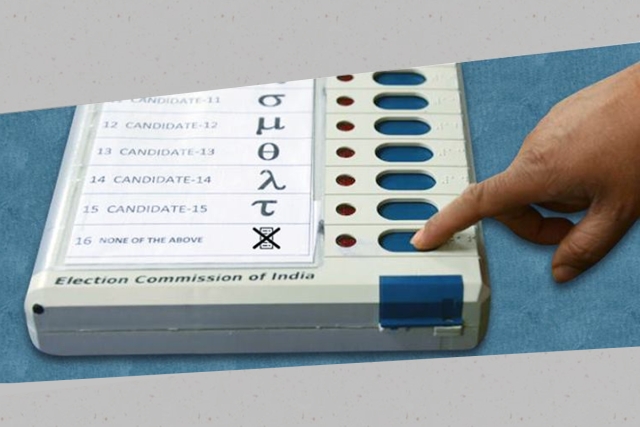 Once you eliminate the impossible, whatever remains, no matter how improbable, must be the truth.

Let us assume a listed public limited company is looking to appoint a new CEO who will lead the company at least for the next 5 years.

You are a stakeholder in this company and have been provided a list of aspirants who wish to be the CEO of the company.

Due process is that the “Curriculum Vitae” of each and every candidate has to be studied carefully, their past experience and their vision for the future of your organisation be evaluated.

You have to compare the set of candidates and shortlist one person most suited for the job. You may compare every candidate for their strengths and weaknesses. You may infact prepare a SWOT matrix to best understand your options.

Contender #1 is a people-pleaser and your good friend. His department is known to under-perform, has missed most deadlines, and there is a doubt regarding his moral integrity. He and his family have been a part of the organisation for a very long time.

The performance of the organisation was not entirely satisfactory when it was headed by this contender’s kin. He has been meeting you regularly to pitch his candidature. You may also be rewarded for your support, in kind, in the future.

You have mixed feelings about contender #2. She is popular and the favourite candidate as her working style is very effective, though not always as per your expectations. She is a task master, who has over the last few years, tried to eradicate internal strife in her department, at times by removing deadwood.

She has crossed your path a few times in the past, and to your anguish, taken decisions for the greater good of the organisation, though not in your best immediate interest. Her department has achieved most targets committed by her and even assigned to her.

The rest of the contenders are a mixed bag and offer very little scope for growth of the organisation, which you realise fully well and hence are not even considering their candidature.

Your dilemma is whether to vote for Contender #1, who is mediocre and has no other claim to fame than his ancestry. So, his only reason for being a candidate is nepotism. Or should you vote for Contender #2, who is a young sharp gun admired for her management skills, fair play, and, above all, integrity?

You have also been offered another option. This option is “None Of The Above” or NOTA for short. NOTA gives you the option to cast your vote such that none of the contenders benefit from your vote.

You shall have performed your duty of casting your vote, but still not affected the outcome of the election process. Most importantly, NOTA invalidates your vote.

You have been intrigued by this NOTA option since some time now and have been discussing it with your fellow stakeholders. Most have dissuaded you from exercising this option, while some have listened while you speak about it.

You are curious to know more about the electoral implications of NOTA and reading the article this far is proof of that curiosity.

Now that I have a grin on your face and your attention, I would like to draw your attention to why “NOTA” should be “NOT Applicable”.

The NOTA conundrum had been playing on the minds of many stakeholders like yourself during General Election 2019, & have resurfaced as Maharashtra goes to polls in October, 2019.

Amusingly, quite a few dissatisfied organisations, associations and groups have suggested their members to exercise this option.

I would like to point out to the stakeholders why exercising this option is illogical.

There is a myth being circulated that if NOTA garners higher votes than any candidate in the fray, all the candidates will be dismissed and re-elections will be held in that constituency.

So, a NOTA vote has no implication on the outcome of an election.

In fact, the Supreme Court of India, while dismissing a petition demanding 'NOTA’ in indirect elections to the Rajya Sabha, noted as under:

NOTA will destroy the concept of value of a vote and representation and encourage defection that shall open the doors for corruption which is a malignant disorder. It has to be remembered that democracy garners its strength from the citizenry trust which is sustained only on the foundational pillars of purity, integrity, probity and rectitude and such stronghold can be maintained only by ensuring that the process of elections remains unsullied and unpolluted so that the citadel of democracy stands tall as an impregnable bulwark against unscrupulous forces. The introduction of NOTA in indirect elections may on a first glance tempt the intellect but on a keen scrutiny, it falls to the ground, for it completely ignores the role of an elector in such an election and fully destroys the democratic value.

NOTA As A Social Divider

In times of voting by ballot paper, the voter could invalidate their vote by simply depositing a blank ballot paper or an incorrectly stamped paper into the ballot box.

Since these options were not possible with “Electronic Voting Machines” (EVM), the Supreme Court allowed the Election Commission of India to offer the option of NOTA in 2013.

Since then, all elections have featured NOTA as an option on the EVMs. The Supreme Court had envisaged that providing an option of NOTA would encourage voter participation and increase turnout.

A study of all election data so far has revealed to the contrary. All empirical evidence suggests that NOTA has not contributed thus far in increasing voter turnout and same has been acknowledged by Election Commission of India.

Another study shows that NOTA usage is highest in reserved constituencies for nefarious reasons.

Anecdotal evidence from Gadchiroli in Maharashtra and Bastar in Chhattisgarh suggests a mobilisation of Other Backward Classes (OBC) vote favouring NOTA against the ST candidates, according to this August 2018 paper in the Economic and Political Weekly.

In Bastar, OBCs formed the Pichda Varg Kalyan Manch (Backward Class Welfare Front), to protest against ST candidates, who, according to them, were getting unfair rights due to enforcement of the fifth schedule that grants special rights to tribal communities.

NOTA is now being used as a tool by certain sections of society to discriminate against other sections in reserved seats, which was never its intended use. A relook at NOTA by the Supreme Court of India on the basis of this data is much needed.

NOTA As A Vote Katuva

A “Vote Katuva” candidate is generally one who is fielded by a rival candidate or party to cut into the votes of the leading candidate by virtue of caste, resemblance in appearance or name, demographics, etc.

The “Katuva” candidate eats into the votes of the targeted candidate by confusing the voter. There is no legal provision to prevent such malpractices.

In the same vein, certain anarchical political parties have been known to encourage voters to choose NOTA as their option in case the voter is not inclined to cast their vote in their party’s favour.

While such canvassing is not entirely illegal, it is again a wrong use of NOTA, going against the spirit of Democracy.

The Supreme Court of India had ordered the implementation of NOTA with an intention to increase voter turnout. All data as discussed above points to the contrary. In fact, it is observed that there is increasing lethargy amongst voters to exercise even NOTA.

As with any organisation or a democracy, each vote counts. Make sure that you do not waste yours frivolously. Choose the candidate based only on merit and work done and not because s/he is a convenient choice.

I have quoted Arthur Conan Doyle, the author of the famous Sherlock Holmes, at the beginning of this article. His adage that “Once you eliminate the impossible, whatever remains, no matter how improbable, must be the truth” shall never grow old.

I implore my readers to understand my objection to NOTA as one purely based on logic.