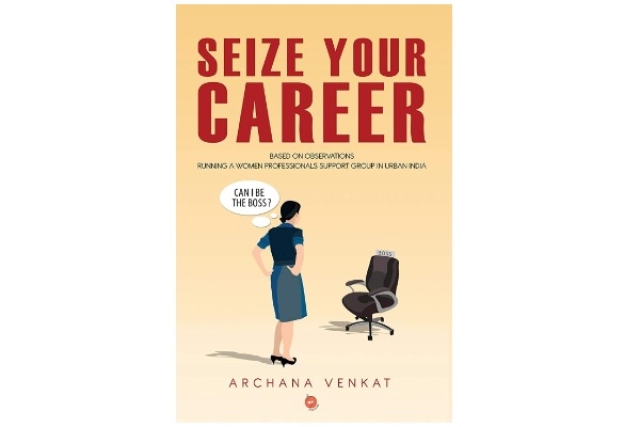 20.3 per cent, 20 per cent and 8 per cent — These statistics show the representation of women in organised private-sector jobs, entrepreneurship and public sector jobs, respectively.

Ironically, despite access to education and the prevalence of women- friendly policies at many workplaces, the percentage of women in the workforce has dropped significantly compared to the last decade.

This drop points to factors beyond organizational frameworks and policy- level decisions, and calls for an introspection into how women perceive and manage their careers.

Seize Your Career by debutant author Archana Venkat introduces readers to 10 scenarios, each reflecting a real life situation that women can face across their careers.

Led by a different protagonist in each situation, the author attempts to hold a mirror to how women perceive their careers and how they make decisions.

Some of the situations discussed in the book include women professionals returning to work after a career break, confusing (and conflicting) feedback given to women managers and high performers, experiences around negotiating for a pay raise and building a case for promotion, addressing benevolent sexism, and the dynamics of junior and senior women professionals working with each other.

The book is a result of the author’s conversations with close to 200 women in white collar jobs in Bangalore over about four years. Besides being relatable, what makes the stories interesting is that the protagonists’ journeys are work in progress. Readers are given a set of questions to ponder about alternate endings and introspect on their own behaviours as colleagues or bosses.

For instance, in the story titled Abhaya, the protagonist tries to battle an unsupportive home environment to return to work.

At work, she doesn’t get the necessary support from her boss and is subject to ageism by her millennial colleagues.

Readers are asked how they typically treat their colleagues from an older generation at work.

“If you are a man reading this story, how would you support a spouse/partner returning to work?”, is another question.

One of the biggest deterrents to women joining the workforce is the disproportionately high amounts of chores they end up doing at home.

Indian women spend an average of 312 minutes a day on unpaid care work, whereas Indian men spend less than a tenth of that.

Even during the Covid-19 lockdown, while men put in an extra hour of work at home, women too increased their time spent on chores at home.

In such a context, a spouse/partner needs to be more than sympathetic and assure the woman that she needs to focus on her career, while he shares the load at home.

An article featured in the Harvard Business Review says that the single most important factor for a woman to have a career is a supportive spouse.

This is demonstrated in a story titled Pavitra, where a very driven young woman faces conflicting feedback from her manager.

She is asked to be driven and decisive, but not be direct and pushy in her dealings with colleagues and seniors.

After seeking feedback from multiple people on how she should change her way of working, she remains unconvinced until her husband puts her in touch with a senior colleague from his office.

The story not only underscores that men and women are judged on different parameters for career progression, but also poses a question that often confronts women — how to remain authentic at work?

This question can also pose challenges when women try to negotiate for a promotion or pay raise.

In a story titled Neeti, a woman finds out that she is the least paid among her peers, despite having performed better than them.

She decides to build a case for her pay raise by relying on data — performance data and pay data for her subordinates that she has access to.

The discussion with her boss takes a turn for the worse, as he interprets her issues differently, offering other solutions but a pay rise (Research shows that Indian women get paid 19 per cent less than men. This gap can widen to as much as 30 per cent as one seeks jobs that require advanced skills. At senior levels, the minimum pay gap is about 15 per cent and can get worse if women take career breaks).

The story not only highlights how women need to relook at their approach to negotiation, but also exposes biases at the workplace that policies alone may be unable to overcome.

One such bias that is often not discussed publicly is benevolent sexism that involves men (and women, at times) sheltering professionals because of perceived notions around the other person’s capability, availability to work et cetera.

The story titled Kushala discusses how her boss offers a woman who has returned from maternity leave the least interesting projects.

He informs her that she should take it easy and not jump to work on high profile and challenging projects, given her new responsibilities as a mother.

The lady tries telling him that she has taken adequate measures to ensure she can give a 100 per cent to work, but it is of no use.

The boss’ behaviour also fuels jealousy and anger among the subordinates, who feel the lady is getting off easily by using her personal situation to an advantage.

How should a woman manage her career under such situations?

The answer is complex. While organisations have made attempts to attract women to the workplace, more work needs to be done towards ensuring they stay motivated to continue working.

This means going beyond populist measures such as reserving a seat for women in senior roles.

Mentorship and sponsorship may be more beneficial for women’s careers.

Women, on their part, must relook at their careers. The author makes a statement at the start of her book asking who should be responsible for how women should be accommodated at work?

While it is easy to point the finger at patriarchy for women’s problems, each woman needs to take the initiative for her career to grow.

If that means setting expectations with her team and manager for her growth, so be it.

Women leaders around the world don’t rely on company policy or other external factors to get them to the top, but rise in their careers as a result of their choices and determination.

Unfortunately, that determination is lacking in many working women, who tend to settle for the status quo of having a job for fear of disrupting the dynamics at home.

Women can own their careers only when they embrace their strengths and persistently push for success.

(Seize Your Career is a handy guide for women on how to make better choices at work. It can also provide insights to leaders who strive for better women’s representation at the workplace).