Book Review: Armageddon or Kurukshetra? A Retelling Of Krishna And His Contribution In Historical, Political And Spiritual Context 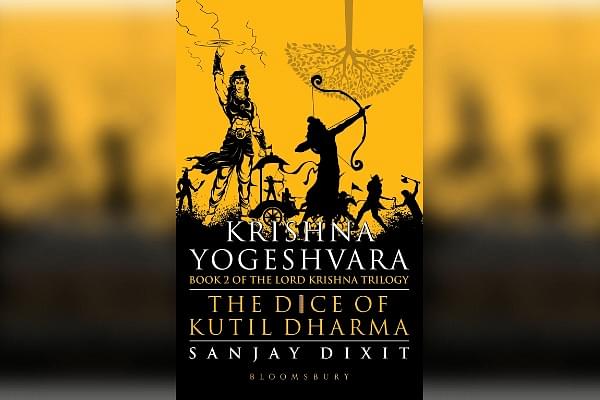 Cover of the book by Sanjay Dixit.

Mahabharata is a national epic and it is also a sacred text. Sri Krishna is in all probability a historical figure and He is also an Avatar who transcends time and brings Himself into ever recurring cycles of time.

There is a dual aspect here. And this duality provides a great space for imaginative minds to play with. And Mahabharata being a national epic and Sri Krishna a national hero, whenever the nation needs a brilliant retelling of the epic, He can emerge to suit the challenges of that particular time.

And remember, all the retelling, provided they are in sync with the Dharmic heartbeat of the Hindu nation, have their own validity which even Vyasa would not object to.

Sanjay Dixit has come up with his second novel in the Krishna Trilogy - 'Krishna Yogeshvara'.

Essentially, this is a retelling of Krishna and his contribution in a historical, political and spiritual context. The author has identified an important strand that runs throughout history which every historian loves to ignore-except Savarkar.

Jadunath Sarkar, the doyen of historians then took issue with Veer Savarkar for emphasising the centrality of religion to the stream of Indian history. In hindsight, we know that Sarkar was wrong and Savarkar was right.

Here, Sanjay Dixit has boldly recognised the religious dimension of the present context and he has a premonition of an impending Kurukshetra.

In fact, every generation has its Kurukshetra cut out for it. Veer Shivaji had his own and Swami Vivekananda had its own. The nature of battlegrounds is becoming more and more non-physical, but the effects are always very physical.

And not all the times does Dharma have to win. There are dice games where Dharma will face setbacks and in hindsight, there could be wrong judgments on the Dharmic side that could have been avoided, like that fateful dice game and the perverse humiliation of the Feminine.

But all that would come later.

The IAS officer-turned-author takes a very intriguing path in the retelling of Krishna’s saga. Already he has made the fight between Krishna and Kamsa, not just a struggle between a tyrant and a liberating avatar, but a fight against the secret cult of Kudil Muni.

Their antagonism to the soul of Sanatana Dharma was symbolically shown in the reverse Swastika.

But then, Kudil Muni was crude and Kamsa was blunt in their aggressive pursuit for what resonates with the way power is aggrandised by monopolistic religions — using religion to create steep spire-like power structures.

Krishna Gopeswara effectively thwarted their nefarious mission. The enemy evolves. Kutil Muni’s disciple Banakantaka takes the name Jatil Muni. Now he becomes a major influence in the inner circle of the ruling dynasty. His scheme to subvert Sanatana Dharma then takes the form of the 10 commandments.

The parallel is a little too obvious here. But let it also be said that the original Biblical 10 commandments in the Jewish spiritual context is entirely different from the Christian theo-political expansionist context.

The former is a set of spiritual disciplines, but the latter is a hate-filled tool for expansionism.

Here, however, the 10 commandments are schemes for subversion of Sanatana Dharma.

I am not sure if Sri Sanjay Dixit realises it, but what he has written has a chillingly striking parallel to what has been happening in Tamil Nadu for the last five decades.

Consider this. The Christian evangelical machinery along with colonial support launched the Dravidianist movement. EVR made the crudest and the most vulgar attacks on Hinduism.

The idols of the deities were broken in public places. Gods were garlanded with chappals in public parade. Orators talked cheaply and obscenely about Hinduism with their pea-brained comprehension of literary and spiritual aesthetics.

A Bishop openly gloated that the Dravidian movement was a time bomb they had set to destroy Sanatana Dharma. And then Tamil Hindus had their saviour in the most unlikely personality of erstwhile DMK’s chief propagandist – M.G. Ramachandran.

MGR stopped Karnunanidhi in his tracks. MGR espoused Hindu values. He even contemplated bringing in a law against forcible and fraudulent conversions. He criticised partiality in family planning that allowed other religionists to increase their numbers.

In short, AIADMK even got the name ‘Dravidian Jan Sangh’ from the Hindu-hating intellectuals. But he stopped Karunanidhi, the virulent anti-Hindu EVR-ist in his tracks.

Soon, even the DMK first family started flaunting their religious zeal — particularly the family women started going to temples and their photos always found their way to the media.

The Church understood that its plan has been defeated. Now, they promote Seeman or Simon who differs from EVR in that he does not talk ill of Hindu Gods and spiritual basis but tries to reduce all Hindu spirituality to ancestral worship.

Then, he talks of linguistic separation of an imagined Tamil religion from the rest of Hinduism.

Now, read this passage from the novel, the plan Jatil Muni unveils:

First, the thing you should do is to study the methods adopted by Kamsa and Kutil Muni. Those methods must not be used. ...Second, we need to change the narrative through deception, lies and allurements. So, we may pretend to follow Sanatana Dharma outwardly, but we replace the deities with our symbols and create Kutil Muni as a deity. The word Kutil does not go well with the Sanatanis, so we may change the name to Saumya Dharma for the public. Remember, destroy the habitat and the species automatically gets destroyed. We need not brutalise the people directly. We will brutalise the habitat in which Sanatana Dharma thrives. ... Fourth, we will adopt all the symbolism and outward features of Sanatana, we will also adopt their singing and dancing. We will just make subtle changes in the names of the practices.

Any Tamil Hindu can vouch for this happening around him in Tamil Nadu. After EVR has failed largely in converting Hindus to a shallow pseudo-rational vacuum into which Christianity would have easily harvested souls, the evangelical forces have changed tactics.

There are full-moon and new-moon day Christian conventions. There are imposing traditional Hindu styled flag-masts coming up in Churches.

There is a constant attempt to appropriate Hindu music and dance with subtle and not-so subtle attempts to remove Hindu symbolism and introduce Christian symbols into them.

Had Sri Dixit been a Tamil, I would have said that the whole thing he had written form a study of the transition of tactics by the Church from its support to EVR, the demolition demagogue, to Seeman, the sly rabble-rousing appropriator.

But, actually what seems to have happened is that the author has revealed a universal subversion principle any monopolistic power mongering theo-political system employs when it encounters a Dharmic natural spiritual tradition like Sanatana Dharma.

Fortunately, in the trilogy, the reverse Swastika would eventually find that the inverse tree of Krishna Yogeshvara is more than a match to all its scheming cunning attempts to subvert Dharma. Importantly, for the young readers, what the author conveys is that this fight is not just spiritual – but it is also external – to be fought in the battlefield in the very physical tangible world.

Simultaneously, one should not lose sight of the fact that the fight is also an inner Sadhana. The author makes a call to experience our inner Yogic-warrior Krishna so that we can give our highest and most profound contribution in a very real Kurukshetra happening around for the present generation.

Another strand that emerges here is the emphasis on the nature of Kala or time. What Jatil Muni aims at is complete annihilation of Dharma by Kutil Dharma. The time he envisions is linear — like the one that starts with creation and ends in Armageddon — then every thing ends for all eternity. But Kurukshetra and the Avatar happens in cyclic time or an oscillating time.

Recognition of this non-linear dynamic conception of time by Dharma actually becomes a problem for Kutil Dharma, which it tries to overcome. It is up to the Dharmic forces ultimately. Without Krishna, the dice game could have been the Armageddon, but with Krishna, it will become Kurukshetra, ensuring the victory of Dharma.