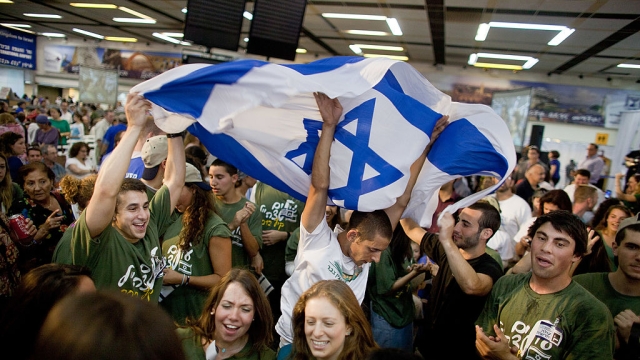 Jewish immigrants from the US wave a flag of Israel as they celebrate their arrival in the terminal hall of Ben Gurion airport near Tel Aviv, Israel. (Uriel Sinai/GettyImages)

The image that comes to mind when one hears the word 'settler' is an angry man in a tallit with a kippah, probably toting a firearm with an ever-pregnant wife trailing him. His attire speaks for his conservatism even before he opens his mouth, telling you that is his land and that Palestinians do not belong there. Yet imagine this person was actually a liberal, probably someone who supported the Civil Rights movement back in the United States or other such causes. Here were liberals involved in an illiberal ideological project. That discordance is the theme of Sara Yael Hirschhorn's book, City on a Hilltop: American Jews and the Israeli Settler Movement. The book's provocative argument stems from dozens of interviews of settlers the author conducted as well as newspapers and state and institutional archives.

There are approximately 60,000 Jewish-American settlers, about 15 per cent, by the Hirschhorn's estimate, of the total number of Israelis who live beyond the Green Line in the disputed territories. Like most humans, they represent a complicated amalgam of beliefs and values, "combining tropes of messianic redemption with modern-day pioneering, hawkish territorialism with Jewish history, sacred promise with suburbanisation, [and] ultra-nationalism with utopian idealism." Hirschhorn examines the American settlers along three axes of Israeli ultra-nationalism: territorial maximalism, exclusionary ethnonationalism, and cultural hegemony.

City on a Hilltop looks at three settlements in particular: Yamit in the Sinai and Efrat and Tekoa in the West Bank. Immigration to these three particular "Anglo-Saxon" settlements started in the early 1970s, in the aftermath of the Six-Day War. The blitzkrieg Israeli triumph affected American Jewry like nothing else.

Despite the Zionist call over the past 70 years – slightly less than two centuries, actually – for the diaspora to return to the Holy Land, American Jews had never really been swept by the Zionist fervour and had not made their aliyah. Instead, Jewish American Zionism took the form of political influence and monetary assistance to the new state of Israel. The reverberations of June 1967, however, had a profound impact on not just Israel and the Middle East but also American Jewry. In fact, it tore the community apart between liberal internationalism and Jewish nationalism. Hirschhorn's work looks at those who chose Jewish nationalism and how they evolved from typical liberal American Jews to... settlers.

An interesting dynamic the book reveals is the ambiguity with which Israel pursued settlements and attracted settlers. On the one hand, there is plenty of vocal support for settlements in the Knesset as well as Israeli society but on the other, it was a struggle for the newcomers to extract assistance from the government in terms of loans, infrastructure, employment, or security, nor did it hesitate to give up the settlements in negotiations. In fact, American settlers were frequently displeased with the Jewish Agency and the Ministry for Immigrant Absorption and exchanged scathing correspondence over the failure of the Israeli government to deliver on their promises.

Americans also ran afoul of the Gush Emunim, the Israeli settler movement, now known as the Ne'emanei Eretz Yisrael. While the Americans saw themselves as pioneers in the Holy Land, wanted clean land records before settling in, and often reached out to Palestinian communities in the vicinity, the Israelis had a more realistic understanding of the situation and were willing to squat the land, provoke the locals, and kept to themselves. The American immigrants felt alienated by the Israeli government and could not fit into the sabra social settings either, making the start-up settlements more appealing to them.

The new arrivals from America were usually young, single, highly educated, upwardly mobile, and traditional but not necessarily orthodox in their religious practice; they came for personal reasons rather than financial ones, struggling with their Jewish identity in the American melting pot. As historian Matthew Frye Jacobson explained, “the question was asked: ‘Given who I am, where do I belong?’ Many even saw their role as an antidote to the increasing 'Levantinisation' of Israeli civilisation and spoke of a 'white man’s burden' incumbent upon immigrants from the United States!"

The culture clash was visible even earlier, when Jewish American plans for a Shalom City were nixed by the Israeli government upon advice from a prominent Canadian zionist. The "‘Americans know best’ theme would antagonise many Israelis,” the Canadian observed, "and that the native population would not 'accept kindly a campaign – let alone an actual city – whose second major goal is to teach Israelis how to live and do things in the American way'." Later on, the settlement at Efrat would prove these observations accurate.

American idealism came in for a rude awakening when the first intifada broke out. Palestinians who had interacted with the Jewish Americans for so long suddenly turned their back on them. Worse, the settlements were rocked by violence which the settlers did not see as deserved: it was beyond them to understand that their very presence in the West Bank, despite their earlier friendliness, was an affront to Palestinians. The two intifadas, combined with the Arab-Israeli peace talks and what they perceived as callous attitude by the Israeli government towards their security and holding the land that had been promised them by G-d, served to radicalise Jewish American settlers.

A string of incidents of Jewish terrorism, from the attempted assassination of the mayor of Nablus to the massacre at the Tomb of the Patriarchs, struck the disputed territories. Hirschhorn's interviews reveal that although most condemned the terrorist attacks, there was still some support for it. Living in a war zone for years, the original liberal ideals of many Jewish Americans frayed. A few returned to the US but a handful crossed the rubicon into extremism.

In a scene reminiscent of that West Wing episode where an Israeli soldier tells Donna Moss that his comrades are good people, who were driven to do a bad thing because of the unremitting hostile situation they were in, Hirschhorn also discovered that some of her interviewees who had once marched with Martin Luther King Jr were now contemplating or condoning violence against Palestinians.

This is deeply concerning – if incessant low-intensity conflict drives even some people to extreme acts, that Israel has been at war ever since its creation does not bode well for the peace process or the mental health of its people. It is unlikely, however, that this urgency will be heeded and we risk the creation of more Baruch Goldsteins, Era Rapaports and Yaakov Teitels.

By the very questions it asks and to whom it asks them gives City on a Hilltop the feeling of a micro-history – there are no great (wo)men driving history nor are there particularly cataclysmic events that realign the priorities and beliefs of millions. Yet history rolls on, shaped by the daily choices made by hundreds of ordinary people. Perhaps the greatest strength of this book is the way the author condemns the settler movement for the dispossession and cycle of violence it causes yet at the same time is sympathetic to the experiences of American Jews. Rather than usurpation or some other politically slanted descriptor, Hirschhorn argues that aliyah is ethnic return migration; despite viewing settlements as an illiberal project, she condemns violence of the Palestinians.

More importantly, the author makes a genuine attempt to walk a mile in the shoes of the American settlers. The result is an uncomfortable picture of rational, idealistic people who yet hold some strong views about Eretz Israel. Some of them, under different circumstances, may have easily been her friends. This brings a sensitivity to the subject that is rarely seen – normally, researchers warm up to their subjects or simply abhor them. Hirschhorn, however, demonstrates a capability to embrace the settlers but reject their project. Readers, even those who strongly oppose settlements, are left with an appreciation of how the other side thinks.

City on a Hilltop is an important contribution to not just the understanding of the settler movement but also to Israel's relations with the US as well as its relations with the diaspora. Given how Israel continues to speak for all Jews and how the diaspora has begun to hold the state to a higher standard – such as the recent spat over conversion and a pluralistic prayer space at the Kotel – understanding of such micro-dynamics will be in dire need.