‘James Wales: Artist And Antiquarian In The Time Of Peshwa Sawai Madhavrao’ – An Overview Of A Fascinating New Book By Dr Uday Kulkarni 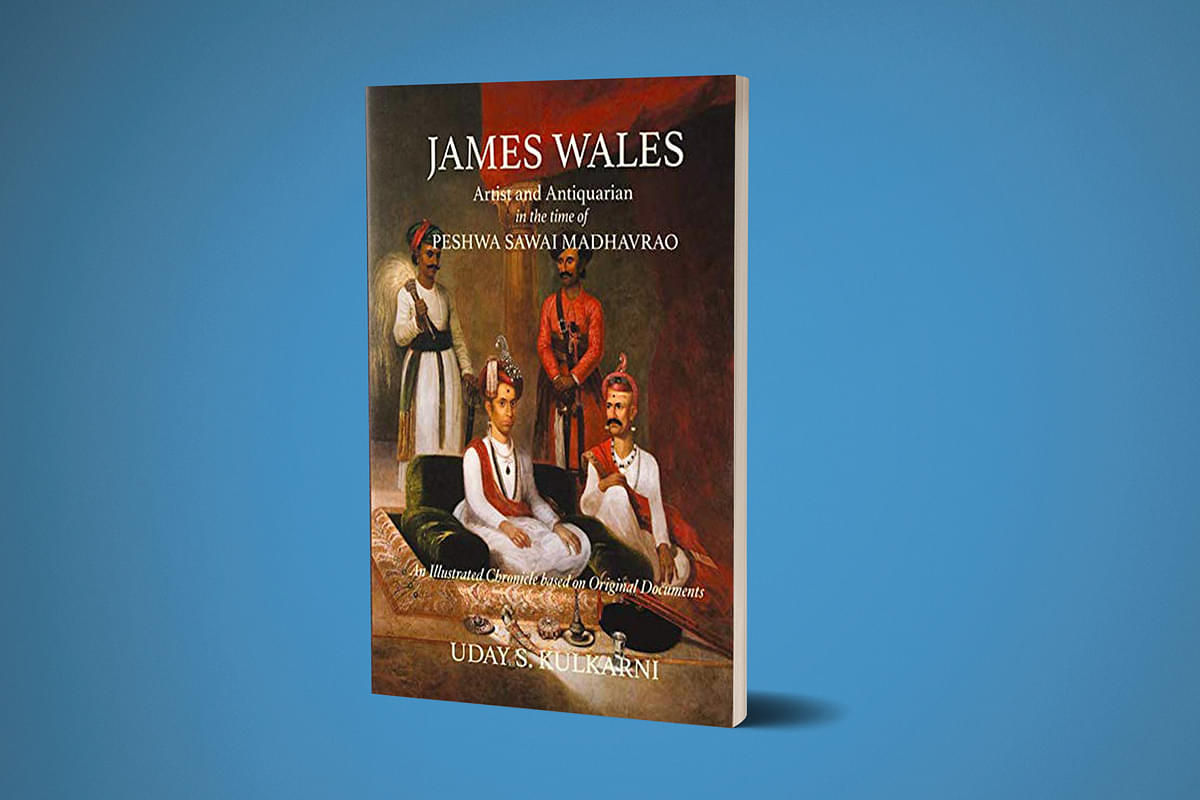 The cover of James Wales: Artist & Antiquarian in the time of Peshwa Sawai Madhavrao by Dr Uday Kulkarni

Over the past few years, Dr Uday Kulkarni's books have helped in increasing awareness about this important period of Indian history. Dr Kulkarni is quite a polymath himself. He is medical doctor and a surgeon who specialises in gastro-intestinal surgery, he has served in the Indian Navy after graduating from the Armed Forces Medical College, he has studied journalism, he is a good researcher and, of course, an excellent historian.

Plenty of good material is available on Maratha history — including hundreds of thousands of original records; however most of these are in Marathi. Dr Kulkarni’s extremely well-researched original works written in English, about the Third Battle of Panipat and Peshwa Bajirao 1 have shed good light on this eighteenth century era. These books provide plenty of historical facts and references.

Dr Kulkarni’s new book, James Wales: Artist & Antiquarian in the time of Peshwa Sawai Madhavrao is a bit different. It is a lot more than a history book.

History is not just about battles, wars and treaties. History is also about understanding art and culture, the administration, the festivals, the customs, and the often-mundane daily lives of a bygone era. Dr Kulkarni's new book provides a fascinating view of the life in Pune and India, in the late eighteenth century, through the paintings, sketches, and personal diary of Scottish Painter James Wales.

James Wales was a Scottish painter who spent nearly four years in Pune during the late eighteenth century. He was based at the British Residency, and was invited here by Sir Charles Malet, the British Resident at the court of the Peshwa Sawai Madhavrao. The few years Wales was in Pune, represented a relatively calm period in the Anglo-Maratha relations — a period when the two dominant powers in India were simultaneously cooperating and competing on a variety of issues.

During his stay in Pune, Wales was able to meet with the nobility multiple times — including Peshwa Sawai Madhavrao, Nana Phadnis, Mahadji Shinde and other Sardars and leaders. In the calm, stable period of the 1790s, the Pune nobility was starting to develop some interest in art and architecture. Wales sketched some great portraits, many of which survive today in museums, libraries and private collections around the world. Today, these are some of the best pictures we have of these important figures of the eighteenth century India.

Wales and his assistants also painted and sketched many views of Pune of that era — including social gatherings, customs, jewellery, nature, and more. He also made some good sketches and notes of the various ancient caves and rock cut temples near Pune, including Pataleshwar, Karla and Ellora. Wales died in India in 1795 and didn’t complete some of his later paintings. His diary also ends abruptly. Wales had plans to publish his works, and those remained incomplete at the time of his death. Some of his works around the great caves of Elephanta and Ellora were later published in 1803 by his family. Some of his incomplete paintings were also finished by his assistants.

This new book by Dr Kulkarni talks about the late eighteenth century history era and also presents many original extracts from Wales’ personal diary. His writings are often direct and simple descriptions of what he observed and experienced, and about the people he met. Reading through them, you can almost read what was going through his mind, when he wrote these notes. They often cover a wide range of topics. Dr Kulkarni’s book describes the specific historical contexts and anecdotes behind the notes in diary, as well as the stories behind many of the paintings. There are numerous other references and sources listed as well, including the present state and location of the paintings.

It is worth highlighting Dr Kulkarni’s phenomenal research work and efforts in putting this book together. A few years ago, Dr Kulkarni came across Wales’ private collection at the Yale University. This included Wales’s original diary. The paintings and sketches were at multiple locations around the world in private collections and museums in India, the UK and the US.

Accessing, digitising and researching all these records was a huge effort and lasted over a year. Interpreting the handwritten 200-plus-year-old diary, and the old English was another big challenge. Assembling all the material together, including the paintings/sketches and setting up the design layout was a tough task. A task which was has been meticulously executed.

The result is a beautiful creation. It is simultaneously an art book, a history book, and a biography. It consists of around 250 pages and has over 200 original paintings and sketches, and over 100,000 words. It is printed on high quality paper, in a large coffee-table book format.

I met the author multiple times over the past year, while the book was being put together, and I can vouch for the stupendous efforts involved. I would strongly recommend this book to the reader. Anyone interested in eighteenth century Indian history should definitely read it. But, as I highlighted earlier, this is a lot more than a history book. People interested in paintings and art would also find this book quite fascinating. The book will be formally released at a publication programme in Pune on 24 November. It is available for order online at Amazon (India and the US).

“James Wales came to India in the last decade of the eighteenth century as an artist, and developed a passion for the antiques of India. His stay in this late medieval period was marked by paintings for the nobility of the day and exploration of ancient caves of the country, of which left copious records and pictures.”

“This book, which is based on James Wales’s journals and pictures, allows us to enter this bygone era and witness late eighteenth century India, through the eyes of an observant artist and antiquarian.

James Wales lived the last four years of his life in India and died after a short illness in 1795. He was not destined to publish his work. Two hundred years later, it has finally seen the light of day.”

“In India of the 1790s, the Maratha Empire had the city of Pune as its capital. The most prominent chiefs of the realm resided there among them arose a fondness for art and architecture. James Wales came here during this time of relative peace and détente between the British power and the Marathas. Wales’s observations during his visits to the palace of the Peshwa or Nana Phadnis give us an idea of the customs in the Maratha court of the time. In Wales’s carefully preserved journal in the Paul Mellon Collection at the Yale Center for British Art, we discover many unknown facets of India of those times. More importantly, Wales along with his fellow artists and patron Sir Chales Warre Malet, left so many paintings of those four years, that we find an illustrated account of the people and the time of Sawai Madhavrao Peshwa.”