National Security And Foreign Policy: Why Modi And His Men Do What They Do 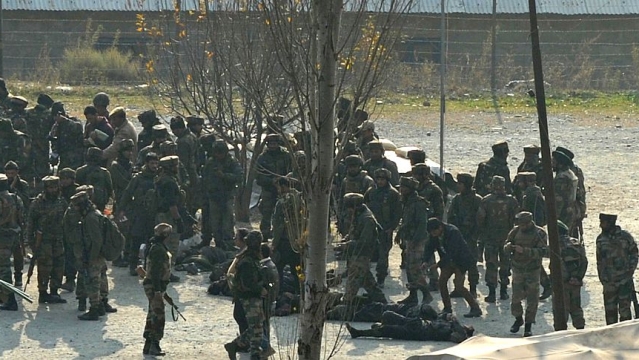 How does the Prime Minister arrive at particularly tough decisions? (ROUF BHAT/AFP/Getty Images)

Sometime early this year, I was on my annual visit to one of the military training establishments to deliver a talk. Over tea, after the usual lively interactive session, a young, smartly dressed officer popped a question that stumped me for a moment. He asked, “Why does media always doubt our military’s ability? Why can’t it believe the forces when they say Indian soldiers went across the LoC to carry out surgical strikes?”

My counter argument to him was, “Don't generalise. There are many (including me in my earlier avatar as a media practitioner) who report factually, but in the absence of official accounts of what actually happened in the raids that took place in 2015 and 2016, it is difficult for the media too, to give the audience the full picture,” I pointed out to him.

While the officer wasn’t entirely convinced, the exchange with him set me thinking. On the return flight to Delhi, I tried to recall what I exactly knew about many of the recent actions taken by the military and other security forces; or for that matter how decision-making evolves at say, the Prime Minister’s level or in the top echelons of the government.

As I scribbled some points, realisation dawned: I may have known enough to write a quick news story or a longer analysis, but clearly, the details about crucial events have always been elusive in the realm of national security.

I asked myself, how easy or hard it would be then to attempt a book on the insider accounts of some the recent decisions taken by the Indian government. As I began looking for unknown details—and more importantly authentic accounts—one realised that it was going to be an uphill task getting genuine information for all the events that I had in mind.

By mid-February however, the idea to write a book had been firmly embedded in my mind. Starting bottom up, some of the preliminary information was gathered; old notes were reviewed; some documentaries were revisited, but I was still not able to put the finger on the period that I wanted to concentrate on.

So choosing a time-period was the first step. As the National Democratic Alliance (NDA) government was about to complete three years in May 2017, lots of books hit the stores focusing on Prime Minister Narendra Modi and the Bhartiya Janata Party (BJP) which appeared unstoppable in winning elections.

None of them, however, looked in-depth at one domain I am familiar with: Security and strategic affairs. That is the time the central idea of this book—unveiling the three years of Modi government’s security policies—finally crystallised in my mind.

I was aware of some of the path breaking policy initiatives the defence ministry and the bold decisions taken by the Prime Minister but the details were missing.

We didn’t know for instance what led to the decision to authorise surgical strikes both in Myanmar and in PoK? Or what drives India’s new found resolve in tackling China? I was curious to know how the Prime Minister arrives at a particularly tough decision? What drives his national security policies? Why does he stress on personal equations with world leaders?

All these questions needed clear answers.

The first task, therefore, was to make a list of possible events to concentrate on and then go looking for information about them. The content and the time period were set. Now came the hard part. Extracting information in the domain that I work in is as it is not easy; to get people to talk about what normally remains secret was doubly difficult. That’s when old associations and friendships came in handy. Information started trickling in bits and pieces; authenticating and fleshing out bare minimum facts was the next step. Slowly, the chapters started taking shape. In most other sectors, people would have gladly spoken about their role and contribution, but those in uniform and the secretive world of intelligence have an inbuilt resistance to sharing even innocuous information.

Nevertheless, I have tried to put together a book based on several insider accounts and hitherto unknown facts about some of the unprecedented steps taken by the Modi government in the past 40 months.

This book by no means is an analytical document. In fact, it is mostly factual and narrated from the point of view of those involved—and more importantly, those whom I could get access. I also had to keep in mind the identity of the persons who have shared the information with me. In that respect, I have followed what my guru M V Kamath told me ages ago: ‘It is more important what you don’t write than what you write.’ But as readers, you would understand why this is so.

Some would view this book as an incomplete account. It’s a start nevertheless. Till then, read the book for what it is: a journalistic record of some of the bold and unconventional decisions taken by the Modi government since 2014.

There is no denying the fact that this book has gained immensely by the trust reposed in me by people in very sensitive appointments. Many who spoke to me cannot be named because they continue to serve in the military and our intelligence agencies. Many details have come from people at the apex of decision-making structure in this country. Some details have been revealed for the first time. I am therefore hoping; many readers would be interested in reading this book.

The book is set to be launched on 29 September in Delhi. The day is significant as it marks the first anniversary of the surgical strikes by Indian Special Forces in Pakistan-occupied Kashmir (PoK).

This article was published on NewsWarrior and has been republished here with permission.