Obscurity And Genius: The Early Years Of Shakespeare 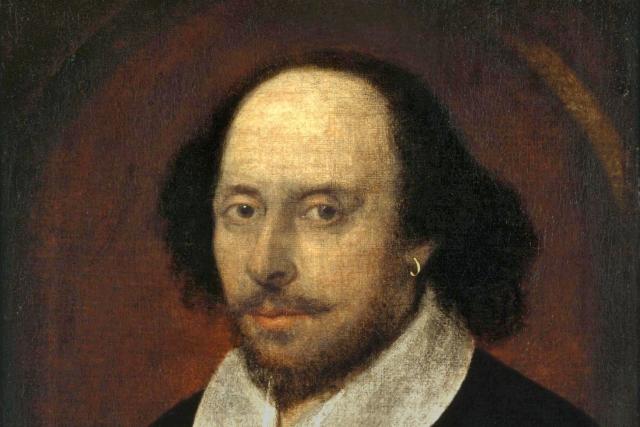 Science may one day ascertain the laws of distribution and descent which govern the births of genius; but in the meantime a birth like that of Shakespeare presents to the ordinary mind a striking instance of nature's inscrutability.

If we consider almost all great poets, in the history of literature, we can commonly recognise some strong genetic factor strongly inspiring their intellectual growth. But Shakespeare, with instincts, and mental faculties, far superior and more purely poetical than any other poet, was paradoxically born to ordinary uneducated parents in the market town of Stratford-upon-Avon, situated in the district of Stratford-on-Avon in the county of Warwickshire.

Most people, (particularly in India), confuse Stratford-upon-Avon with Stratford on Avon. The former is the market town in which Shakespeare was born. The latter is the name of the district in which it is situated. The word “upon” was deliberately chosen to avoid confusion and to enable people to distinguish between the two.

There was nothing supernatural about his birth; the heavens themselves did not blaze forth to herald the birth of the greatest genius of all time. He was the eldest among eight children-four daughters, and four boys.

The father John Shakespeare, was an affluent glover by trade. He was also a tanner, and a wool and corn merchant. He served on the Town Council and became a Mayor. In 1556, John bought the main part of the house in Henley Street, which is now known as the” birthplace”. The family, including Shakespeare, grew up there.

In 1576, beset by financial difficulties, he mortgaged his wife’s property. Shakespeare's mother Mary Arden, was the daughter of a prosperous farmer and land owner. Some scholars have speculated that she must have been endowed with intelligence, imagination, and idealism which she must have passed on to Shakespeare. These qualities must have influenced his understanding of the psychology of people, as revealed in his great plays.

Of course, his observation of the lifestyle, habits and customs of men and women in Stratford-upon-Avon and later on in London must have also contributed to his understanding of human nature.

There was not a drop of royal blood in Shakespeare's veins, nothing to indicate that someday he would write Saint Crispin’s speech in Henry V, the famous speech of John of Gaunt in Richard II and Cardinal Wolsey's speech in Henry VIII. There was nothing in the peaceful, unimpressive landscape upon which he must have gazed, to inspire poetry that would outlive the Greek marbles or the gilded monuments of princes.

The great plague of London reached Stratford-upon-Avon on 11 July 1564, when Shakespeare was about three months old. The plague lasted six months. About 200 people died in the town which had a population of 1000.

Shakespeare’s house was unaffected and so Shakespeare miraculously survived - an example of divinity sparing the lives of great poets.

This was indeed a stroke of incredible luck for mankind.This will be clear from the following argument.

There is a hypothesis in science known as "multiple discovery" or "simultaneous invention". It is a concept that most scientific discoveries and inventions are made independently and more or less simultaneously or about the same time, by multiple scientists and inventors.

If some scientist does not discover a particular law, some other scientist would sooner or later. If an inventor does not make a gadget, there will always be some other inventor, who will invent it. Thus, the scientist or the inventor suffers from an inherent handicap of someone else also independently discovering the same law or inventing the same gadget.

Some examples are the discovery of calculus by Newton and Leibniz, and of analytical geometry by Descartes and Fermat, the invention of the telephone by Graham Bell, and Elisha Gray and the incandescent bulb by the British physicist-chemist Joseph Swan and Thomas Edison.

Thus, scientists discover laws already present in nature and waiting to be discovered by any one of them. It’s just that conventionally the first to discover a law is given the credit.

As Shakespeare himself wrote in As You Like It:

The poet’s eye in fine frenzy rolling Doth glance from heaven to Earth, from Earth to heaven And as imagination bodies forth The forms of things unknown, the poet’s pen Turns them into shapes and gives to airy nothing A local habitation and a name

Shakespeare almost certainly went to one of Stratford’s ‘petty’ or junior schools where he would have learnt his letters with the help of a hornbook (a teaching aid consisting of a leaf of paper showing the alphabet, often the ten digits and the Lord's Prayer, mounted on a wooden tablet and protected by a thin plate of horn).

From the age of seven he would have studied in the King’s New School where emphasis would have been on Latin, it still being the international language in Europe in the sixteenth century.

Shakespeare probably left school at the age of 14 or 15. Shakespeare’s plays reveal a deep knowledge of the curriculum, taught in such schools, which was geared to teaching pupils latin, both spoken and written.

The classical literature studied in the classroom influenced Shakespeare's plays. For example, some of the ideas for his plots and characters came from Ovid’s tales, Plutarch’s lives, and Holinshed’s chronicles.

It is not known what Shakespeare did when he left school, probably in 1578, at the age of 14.

He did not have a university education. If he had been put through a rigorous educational schedule at the university, his genius would have been stifled. This intellectual Gulliver would have been captured by the Lilliputians there, and subjected to restrictive rules and regulations suppressing his originality. Some unimaginative professor or Don would have imposed conditions that would have cramped his style.

We would have perhaps come to know about some trivial details like Shakespeare having failed in grammar or having been punished for not doing homework. We are indeed lucky that we are ignorant of such petty facts (the weeds and thorns) and have come to know only about the fragrance and colours of the beautiful flowers he produced.

There is speculation as to what Shakespeare actually did during this period and scholars have put forth several theories.

I shall mention just a few.

According to one version, he became a school master or a lawyer's clerk.

Another theory is that he gave private tuitions in the North of England.

Yet another theory is that he was a gardener or a sailor or a printer or a money lender or a coachman.

Some scholars think he was a Scrivener (a scribe or a notary).

There is speculation that he travelled to many places--Venice, Ephesus, Denmark, Verona, Florence, and Scotland, as in many of his plays, the events take place there. However, there is no evidence to conclusively establish any of these theories

The question arises as to why, and when Shakespeare left Stratford-upon-Avon for London. Here also, there are several theories.

I shall mention three.

One theory is that Shakespeare might have offended one Sir Richard Lucy by poaching deer and was forced to leave Stratford to avoid prosecution.

Another theory concerns his controversial marriage. Shakespeare’s wife, Anne Hathaway, was born in 1556. Shakespeare was eight years younger than her. When they married in 1582, he was eighteen and she was twenty-six. She was pregnant at the time and whatever their relationship was like – which we don’t know anything about – he had no alternative other than to marry her because it was socially unacceptable for a woman of her standing to have a child without being married. This embarrassment might have forced Shakespeare to leave Stratford-upon-Avon.

One more theory is that he went to London to launch his career as a playwright. I am inclined to believe in this last theory.

The literary world in London had been dominated by men of great talent, like Christopher Marlowe, Ben Jonson, Edmund Spencer, Francis Beaumont, John Fletcher, George Chapman, Thomas Heywood, John Lyle, and John Webster. It was into this world that Shakespeare plunged headlong.

The conservative establishment of the literary world did not give the respect due to him in the beginning. A good example is the mean behaviour of the playwright Robert Greene. In a pamphlet "Groats-worth of wit bought with a million of repentance", printed in 1592, he used the following derogatory expressions to insult Shakespeare:

“Yes, trust them not, for there is an upstart crow,

beautified with our feathers that with his Tygers heart wrapt in a Player's hide,

supposes he is as well able to bombast out a blanke verse as the best of you;

and being an absolute Johannes Factotum,

Greene referred to Shakespeare as an" upstart crow", meaning someone who has risen economically or socially but lacks the social skills appropriate for this new position (to crow is to boast and a crow is a scavenger who steals from others!)

Greene meant that the " upstart crow" was an actor, who believed that he could write as well as the best scholar. He referred to him as an "absolute Johannes Factotum"(a Mr. Do-Everything, a Jack of all Trades) with a 'Tyger's heart' (an aggressive person) "wrapped in a player's hide".

Greene did not like actors, "trust them not", because of their power-the actors controlled the theatres and acting companies and they paid just a one-off price for a play - the author received no more money, there were no copyright laws nor any royalties.

The "university set" were considered as being the only authors of any note with the ability to write poetry.

Shakespeare was not of the 'university set’.

Anyway, since Greene was a mediocre playwright his derogatory remarks were obviously motivated by petty jealousy arising out of the immediate popularity of Shakespeare following his triumphant entry into the dramatic scene in London and his meteoric rise in the literary world. Shakespeare naturally attributed Greene's remarks to petty jealousy and treated them with the contempt they deserved.

Shakespeare wrote his first two plays Two Gentleman of Verona and The Comedy of Errors in1589 (about three years before the jealous Richard Greene made his derogatory remarks), Julius Caesar in 1599, and his four great Tragedies, Hamlet, Othello, King Lear, and Macbeth between 1600 and 1606.

Thus, Shakespeare proved to be the mighty summit of Elizabethan drama whereas all the other playwrights were merely the foothills. It was also established beyond doubt that Shakespeare was the greatest of poets and that what Greece and Rome had produced was only great until his time.

"Leave thee alone for the comparison

Of all that insolent Greece or haughty Rome

Sent forth, or since did from their ashes come.

Tri'umph, my Britain, thou hast one to show

To whom all scenes of Europe homage owe."

The marvellous boy from Stratford-upon-Avon, who suddenly burst upon the scene in London, immediately earned the respect and appreciation of not only all his literary contemporaries, but also all the poets and millions of people of every succeeding generation, all of whom venerate him as a poet who in genius excelled the human race.