On Modi And His Mammoth Move Of Demonetisation 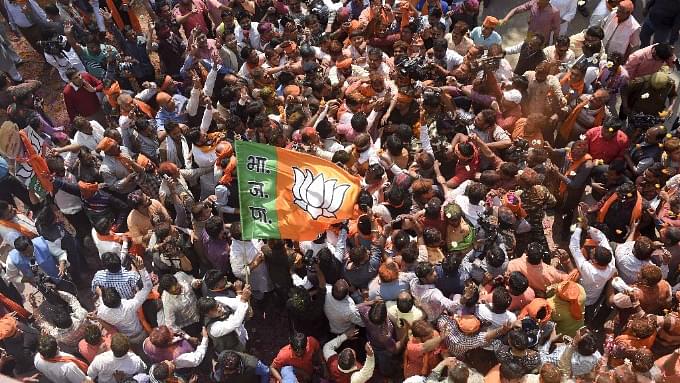 Three years since the country let ‘change’ define its way of doing things, many things surely have changed. Be they good or bad, many an impactful decision has reshaped not just the country’s political setup but also the economic arena.

In ‘Marching With A Billion: Analysing Narendra Modi’s Government at Midterm’, author Uday Mahurkar traces the journey of the present government and the repercussions of the reign of Prime Minister Narendra Modi.

Here is an excerpt from the book that dissects the big-bang decision of demonetisation, even as he calls it ‘a bitter pill for a better future’.

That after demonetization the finance ministry had to make nearly four dozen amendments to the norms of withdrawal of cash from banks in just over two months was proof of the confusion that followed the move in the absence of adequate deliberation and forethought. A glaring example was the jump in the figure of savings in the Jan-Dhan accounts. It went up from `47,000 crore to `87,000 crore in just two months after demonetization. It indicated that the holders of black money had used the Jan-Dhan accounts of poor people to launder their funds.

Obviously, the prime minister’s obsession with maintaining secrecy about the move, as in many other administrative matters, prevented him from taking opinions on the decision’s implementation in advance. He did not make adequate arrangements for keeping enough `500 and `100 notes ready along with the new `2000 notes before taking the step.

Had adequate consultation and planning been done, the pain would have been much less and fewer black-money holders would have been able to manipulate the system. But all that is past, and there is also a strong flip side to it. What is undeniable is the fact that the future impact of the decision appears to be positive, and positive only, for the Indian economy. The move is seen as historic and bold, driving India towards a less-cash economy by changing the economic behaviour of the people and curbing corruption and black-money generation to spur growth.

The amassment of black money will be difficult from now onwards, with a set of new laws being put in place, including the one against benami (false) transactions that will hit behind-the-screen property deals involving unaccounted for money. The 7 per cent GDP growth figure for the third quarter of 2016–17 showed that even the short-term negative impact on the economy has been much less than expected, though the figure became a matter of debate in some quarters.

Undoubtedly, a new era of digital economy has begun for a country of 1.3 billion people, of whom less than 3 per cent paid income tax, not more than 2 per cent were part of the digital economy and only 24 per cent had declared annual income worth more than `10 lakh before 8 November 2016. Demonetization exposed for the first time the dark underbelly of unaccounted for money in the country and the reasons behind the high levels of economic disparity.

Modi’s move therefore was like a strong antidote to the anaesthesia that had for decades kept the country in a deep slumber while the menace of black money and corruption raged and prevented the creation of a level playing field for the people at large. The extent of the cash economy can be gauged from the fact that individuals, small firms and NGOs together, amounting to six million units, deposited banned notes worth a whopping `7 lakh crore in banks for replacement. It comes to an average of `11 lakh (or $15,000) per unit.

Despite marked growth after 1991, India has not been able to provide shelter, food and clothing to a large number of its citizens. The GDP growth as a result of demonetization was expected to dip marginally during 2017–18 and partially affect the job scenario in both the formal and informal sectors, besides impacting a part of the rural economy. But the initial trends in 2017–18 are proving the predictions only marginally correct, and even wrong in some areas.

Interestingly, many experts, including economist Surjit Bhalla, see demonetization as a great exercise in behavioural change initiated by Modi to push people towards digital transactions, which is necessary if India is to realize its full economic potential. Bhalla goes many steps further: ‘Make no mistake. It is an important first step towards what will be remembered as India’s biggest reform.

Those condemning the move are mostly those who have lost unaccounted for money or won’t be able to generate black money in the future. Everyone else has welcomed the move. Their percentage would be about 90 per cent.’

Even after the initial puzzlement was over, the debate over demonetization continued. Was the apparently draconian measure timed well? Was it implemented properly? Most agree that it could have been implemented in a better manner, limiting the inconvenience to the common man and plugging escape routes for black-money holders. But there is a large section of economists and experts who believe that the move was precisely timed and the pain inflicted was intended to encourage people to switch from cash to digital transactions.

Economist Vivek Dehejia, a professor at Carleton University, Canada, says: ‘Invalidation of currency has failed in many countries in the past because the rulers took the step under pressure of a dwindling economy. Modi’s timing was perfect as he did it when the economy was doing well, unlike Venezuela which went for demonetization on 11 December 2016 when that nation’s economy was down and invited more trouble. The prime minister is in fact the first person in history to do so when the economy was on a positive track and growing at a healthy rate of over 7 per cent, with an overflowing FDI.

Undoubtedly, it is the biggest policy change move in the monetary history of the modern world. I see it as a precise plumbing and fixing job to clean up the system on the way to increasing the size of the Indian economy.’

On the timing of the move, Modi himself has said it was perfect as demonetization can be successfully done only when the economy is doing well and not when the economy is weak. It is not very difficult to comprehend Modi’s vision. The prime minister wants India to be a $5 trillion economy in the coming years and a $10 trillion economy in the long run to realize his dream of ensuring food, shelter and clothing for every household, and turning India into a superpower. So he believes that India can ill afford to have a $2 trillion official economy on paper and a $3 trillion unofficial parallel economy in cash.

Excerpted from ‘Marching with a Billion: Analysing Narendra Modi’s Government at Midterm’ by Uday Mahurkar, Penguin Random House India, 2017, with the permission of the publisher.