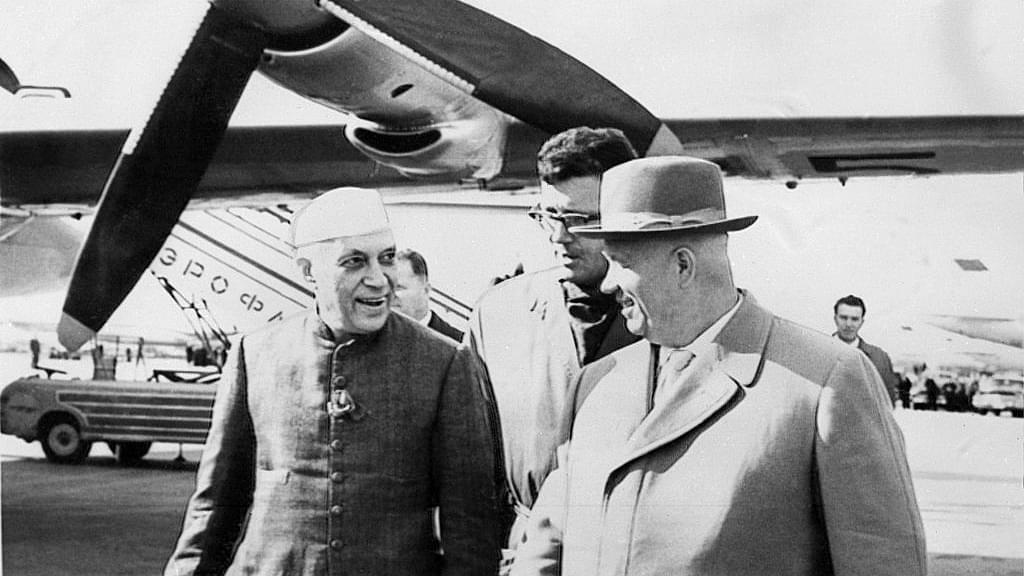 Diplomatic historians have long complained of the difficulties of doing research on the modern Indian republic due to the lack of proper archival procedures. The Indian government exhibits a strong allergy to the systematic declassification of its files, and oral history has its own pitfalls -- difficult access, passage of time and subjection to the vagaries of memory. Vivek Prahladan, however, has cobbled together disparate sources -- interviews, private papers of Indian bureaucrats, foreign archives and, most importantly, a stash of recently-declassified Indian documents -- to produce an explosive reinterpretation of Indian foreign policy during the Cold War.

The Nation Declassified begins in 1962, a pivotal moment in Indian history. The humiliation of defeat in the Sino-Indian War birthed, according to Prahladan, a realist strain of Indian foreign policy. In his final days, Jawaharlal Nehru tilted drastically towards the United States and initiated a massive expansion of Indian defence. The size of the military was increased, international vendors were approached for armaments, and impetus was given to dual-use technological development. As a result, we see a close parallel in the development of India's nuclear weapons programme and its civilian energy sector, between its missile project and its extra-terrestrial ambitions. Undergirding this was allocation of monies to supporting industries such as electronics.

Prahladan touches on the major events in Indian Cold War history to reframe them in the light of his discoveries. This includes the development of the Indian Air Force, the nuclear programme, the Third India-Pakistan War of 1971 and the balance of power in Asia after the Sino-American rapprochement. In this last section is even an interesting bit about how much Indian intelligence knew about the Pakistani nuclear weapons programme. Each chapter starts from the Indian Stunde Null, 1962, and describes the evolution of policy until 1983-84. However, the longest chapter, the one on the Indian nuclear programme, extends until the Pokhran II nuclear tests in 1998. This allows the author to show the continuity of policy from the late 1960s and early 1970s, culminating in many of the overt decisions after the Buddha laughed.

Prahladan's work weaves an interesting narrative of India's relations with the superpowers. Contrary to the popular, simplistic notion that Nehru was a Soviet "stooge", Prahladan shows the prime minister swing wildly towards the United States during the hostilities with China but gradually recentre the country before it drifts towards the Soviet Union under his successors.

During the war, Nehru frantically requests the US for military assistance, including 12 squadrons of aircraft. Given the number of pilots the Indian Air Force had back then, it would have required American pilots to fly the planes. Washington asked for overflight, refuelling and basing permission, which was given but revoked by Nehru's death. The real souring of India-US relations, according to the documents Prahladan uses, occurs during the Second India-Pakistan War in 1965 when US-supplied arms were used against India by Pakistan. Delhi had repeatedly warned Washington of this inevitability but had been ignored. Furthermore, the South Block realised that Western rearmament of India, even against China, was contingent upon maintaining a balance of power with Pakistan. Even during the Sino-Indian War, the US kept up the pressure on India to negotiate with Pakistan over Kashmir. Indian officials felt that there was no genuine Western interest in their situation, and Washington and London were merely making use of the opportunity provided by Beijing to further their goals in the region.

An interesting structure of Prahladan's work is that it focuses almost entirely on primary sources. Although there are references to secondary material, it is substantially lesser than most academic history books would contain. Furthermore, Prahladan reproduces some of the over 10,000 pages of documents he accessed in his endnotes. This is a superb feature of the book because it allows the academic a glimpse into the documents, and the lay reader gets to experience what it is that historians actually do in those musty archives and libraries! Admittedly, this same bonus can also put off many casual readers. While it is a good habit to read the footnotes in all books, it is not only important but a pleasure in Prahladan's work.

It is only fitting that the most controversial aspect of The Nation Declassified rests in its longest chapter. Based on documents available at the Nehru Memorial Museum and Library in Delhi, Prahladan argues that P N Haksar, Indira Gandhi's principal secretary from 1967 to 1973, had articulated in a 1968 memo the case for a robust Indian nuclear arsenal consisting of second-strike capability through nuclear-powered submarines and missiles with a range of approximately 2,500 to 3,000 miles. This is a breathtaking vision, especially for half a century ago, and one that India is struggling to achieve.

These revelations threaten to upend the entire understanding of the Indian nuclear programme and have, therefore, been met with quite some incredulity. While no serious scholar denies the Chinese threat to India, there are lively debates about Delhi's response to it. One school of thought holds that the first Pokhran test in 1974 was not military but political in nature, while another strand of scholarship argues that India was a reluctant nuclear power who drifted to its decision in 1974. The debate over The Nation Declassified is not its interpretation -- that would have come later -- but the quality of its sources.

Prahladan attributes his most important material to an unsigned memo in Haksar's files. However, as scholar Yogesh Joshi has pointed out to me in private correspondence, the attribution is invalid. Prahladan does acknowledge that the document he bases his argument on is unsigned and undated, yet he goes on to declare Haksar as its author, probably because it was found in his files. This memo is supplemented by other documents arguing for an Indian nuclear response to China, from Subramaniam Swamy, C R Palsokar and especially a memo by former president K R Narayanan from 1964.

Former chairman of the Atomic Energy Commission, M R Srinivasan, has also gone along with Prahladan's interpretation: in an interview to the author, he said about Haksar, "no one in current memory knows that an Indian thinker as P N Haksar was already thinking in terms of a triad and it has till now remained hidden in the archives," though it is not clear whether this was before or after Srinivasan was exposed to the author's controversial attribution or how closely he scrutinised it. This does not fit with the perception of Haksar through every source until now. An email to Prahladan for clarification has gone unanswered as of the publication of this review.

This Haksar episode puts a question mark on all the other sources The Nation Declassified has referred to in its narration. Nonetheless, it does not hurt too much because the broad outlines of the other incidents are already well known -- at least to academics -- and not disputed. For the lay reader, this means that the book is chock-full of interesting details. Unfortunately, The Nation Declassified is a difficult read because the publisher -- Har Anand Publications -- has done a shoddy job in editing and producing the manuscript. The final product is printed on low-quality paper, bound poorly and does not look like it has seen the love of a copy editor. Despite this, The Nation Declassified carries a hefty price tag of Rs 800 on Amazon.

For the most part, The Nation Declassified does not refashion the narrative nor break new ground on Indian Cold War history. Rather, it adds details to the already-known trajectory of relations in interesting ways. For example, India's concern over Pakistan receiving supplies of US military equipment from the Middle East is clearly documented, as is the fact that it was the Indian Air Force that myopically turned down the Soviet Union's offer to sell India the nuclear-capable Tupolev TU-22M long-range bombers. The Soviet Union and the US both supported Indira Gandhi during the Emergency, and despite the US’ public posturing, Henry Kissinger was quite reasonable in private about India's nuclear test.

On the issue of nuclear weapons and decision-making, Prahladan's work clearly supports that of Bharat Karnad (and mine) in arguing not only that India perceived a real threat from China and its nuclear weapons, but this perception led Delhi to trudge across the nuclear rubicon. The incompetence of the defence, bureaucratic and political apparatus should not be construed to mean that India did not feel the need for nuclear weapons except as political weapons or for prestige.

Prahladan's discussion of the documents, even excluding the Haksar memo, shows that there was indeed a vocal group in the political as well as technical communities that advocated weaponisation, and it was not dominated by "peaceniks" even if they held sway for the most part. The scientific reality that many analysts overlook in declaring India's nuclear weapons ambitions as not serious because of the failure to test before 1968, is the importance of the Purnima (Plutonium Reactor for Neutron Investigations in Multiplying Assemblies) reactor that went critical only in 1972. From the moment Lop Nur burned brighter than a thousand suns, India's inexorable march towards the smiling Buddha began.

Despite the shortcomings of the publisher, The Nation Declassified is an interesting and important book well worth reading. At the very least, it makes a strong presentation of the argument for realism and strategic thinking in Indian policy, a view that does not have many takers. This, of course, then raises uncomfortable questions about the failures in implementation of these alleged realist and strategic policies, for Indian security remains seriously impaired. In a manner, Prahladan's work brings nuance to the world of Indian policy-making by transforming binaries of intent and implementation to the greyer world of modern bureaucracy and a weak state. It should, therefore, be on the reading list of anyone with a serious interest in Indian foreign policy during the Cold War.