The Concept Of The Universe As Understood By Ancient Indian Seers 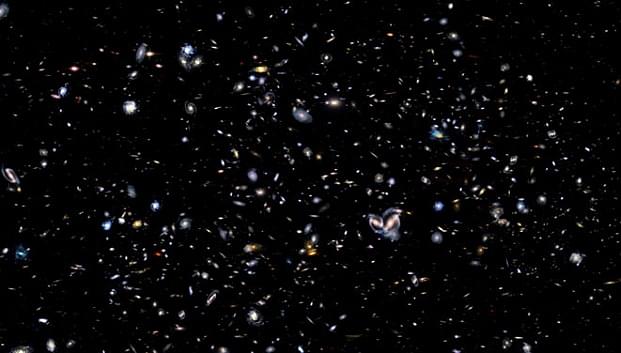 How did the ancient Indians view the cosmos, time and life? Subhash Kak tells us about the Indian cyclical model and ideas related to time.

It is generally known that the Indians believed in a cyclic universe. This idea is related to three other beliefs: (i), time is endless and space has infinite extension; (ii), earth is not the center of the universe; and (iii), laws govern all development, including the creation and destruction of the universe. It was believed that there are connections between the physical and the psychological worlds, and an equivalence existed between the outer cosmos and the inner cosmos of the individual. This is expressed in the famous sentence-

“as in the cell so in the universe”.

The Indian cyclic model assumes the existence of countless island universes, which go through their own periods of development and destruction. The conception of cyclicity is taken to be recursive. For an early exposition of these astronomical and cosmological ideas, one may like to read al-Bīrūnī’s classic history of Indian science, composed in 1030 AD, and for an even earlier, popular, view of Indian ideas, one may consult the great Vedantic text called the Yoga Vāsiṣṭha (YV), which at 32,000 shlokas is one of the longest books in world literature.

As an aside, I consider the Yoga Vāsiṣṭha the greatest novel of all time. It was composed in Srinagar over a thousand (if not more) years ago and concerns the young Rama who is disillusioned with life getting instruction from the sage the Vasiṣṭha over a period of 21 days. The narrative is in terms of intertwined stories and it contains romance, deepest philosophy, magic realism, and adventure.

Within the kalpa are fourteen cycles of local creation and destruction, called manvantaras, each lasting 306.720 million years. Each of these periods is to be taken to be a period of local destruction (extinction) and subsequent regeneration. Within each manvantara are 71 smaller cycles, called mahāyugas. These periods are described by Āryabhaṭa, the great astronomer born in 476 AD. As is generally known, Āryabhaṭa presented the rotation information of the outer planets with respect to the sun, meaning that his system was partially heliocentric; furthermore, he considered the earth to be rotating on its own axis.

In another version, described in the Sūryasiddhānta and the Purāṇas, each kalpa equals 1,000 yugas of 4.32 million years. Yoga Vāsiṣṭha 6.1.22 says that directions depend on the position of the poles, the movements of the stars, the sun, and the moon, and that the directions change from one sub-period to another.

Al-Bīrūnī says this about India ideas on time-

The Hindus have divided duration into two periods, a period of motion, which has been determined as time, and a period of rest, which can only be determined in an imaginary way according to the analogy of that which has first been determined, the period of motion. The Hindus hold the eternity of the Creator to be determinable, not measurable, since it is infinite. They do not, by the word creation, understand a formation of something out of nothing. They mean by creation only the working with a piece of clay, working out various combinations and figures in it, and making such arrangements with it as will lead to certain ends and aims which are potentially in it (page 321, vol. 1).

The universe is split up into many island-universes, as described in the Yoga Vāsiṣṭha 6.2.59:

I saw countless creations though they did not know of one another’s existence. Some were coming into being, others were perishing, all of them had different shielding atmospheres (from five to thirty-six atmospheres). There were different elements in each, they were inhabited by different types of beings in different stages of evolution.. [In] some there was apparent natural order in others there was utter disorder, in some there was no light and hence no time-sense.

The idea of evolution is basic to all Indian thought. The Sāṃkhya is the Indian theory of evolution, which is supposed to apply both to the individual and the cosmos. In it, the basic entities are pure consciousness and materiality (nature). Nature has three constituent qualities (guṇas) called sattva, rajas, and tamas, and as the balance between these three changes the universe evolves.

Out of the interplay of the five basic elements arise other principles (tattva): five subtle elements, five action senses, five senses of perception, mind, egoity, and intellect. The evolutionary sequence goes through many levels. The tattvas help in the the emergence of life out of inert matter. The guṇas are not to be taken as abstract principles alone. Indian thought believes that structure in nature is recursive, and the guṇas show up in various forms at different levels of expression.

The texts imply that ingredients for the growth of life are available throughout the universe. Infinite number of universes are conceived, so each new one is created like a bubble in an ocean of bubbles. The tattvas are not discrete and their varying expression creates the diversity of life in and across leading different species.

Each sensory and motor tattva is mapped into a corresponding organ. Indian thought conceives of 8.4 million species, which number is impressive, considering that modern authorities (such as Graur and Li in their “Fundamentals of Molecular Evolution”, page 436) estimate the number of extant species to be 4.5 – 10 million.

The physicist Erwin Schrödinger thought that the Sāṃkhyan tattvas were the most plausible model for the evolution of the sensory organs.

I remember that once upon a time there was nothing on this Earth, neither trees and plants, nor even mountains. For a period of eleven thousand years (4 million Earth years) the Earth was under lava… [Later] apart from the polar region, the rest of the Earth was covered by water. And then forests enveloped the Earth, and great asuras (demons) ruled. Then there arose great mountains, but without any human inhabitants. For a period of ten thousand years (almost 4 million Earth years) the Earth was covered with the corpses of the asuras.

Indicating the presence of other animals while the giant asuras were on Earth, YV suggests that man arose later. YV also speaks of minor ages of destruction on Earth that correspond to the yugas.

The Indians believed that all life can be divided into three classes (Chāndogya Upaniṣad 6.3.1):

Given that it is also affirmed that life on other planets exists and that there was a gradual rise of life on the earth, it would appear that this implied a belief in a panspermia theory.

In Indian mythology, the continents are in concentric circles. Wrongly applied to the outer cosmos, this Purāṇic cosmology represents the inner cosmos of the individual that maps the universe. It, therefore, brings in outer astronomy only in an incidental fashion. The earth of the Purāṇas is the individual pictured as the plane that touches the navel. Below the navel are the underworlds; above the navel are the sun and the moon in the head, and beyond them the planets and the stars. The perceived dimensions of the sun and the moon in this conception relate to the inner cosmos.