The Great Unravelling: Travails Of A Congress Spokie Who Believed In His Party A Bit Too Much 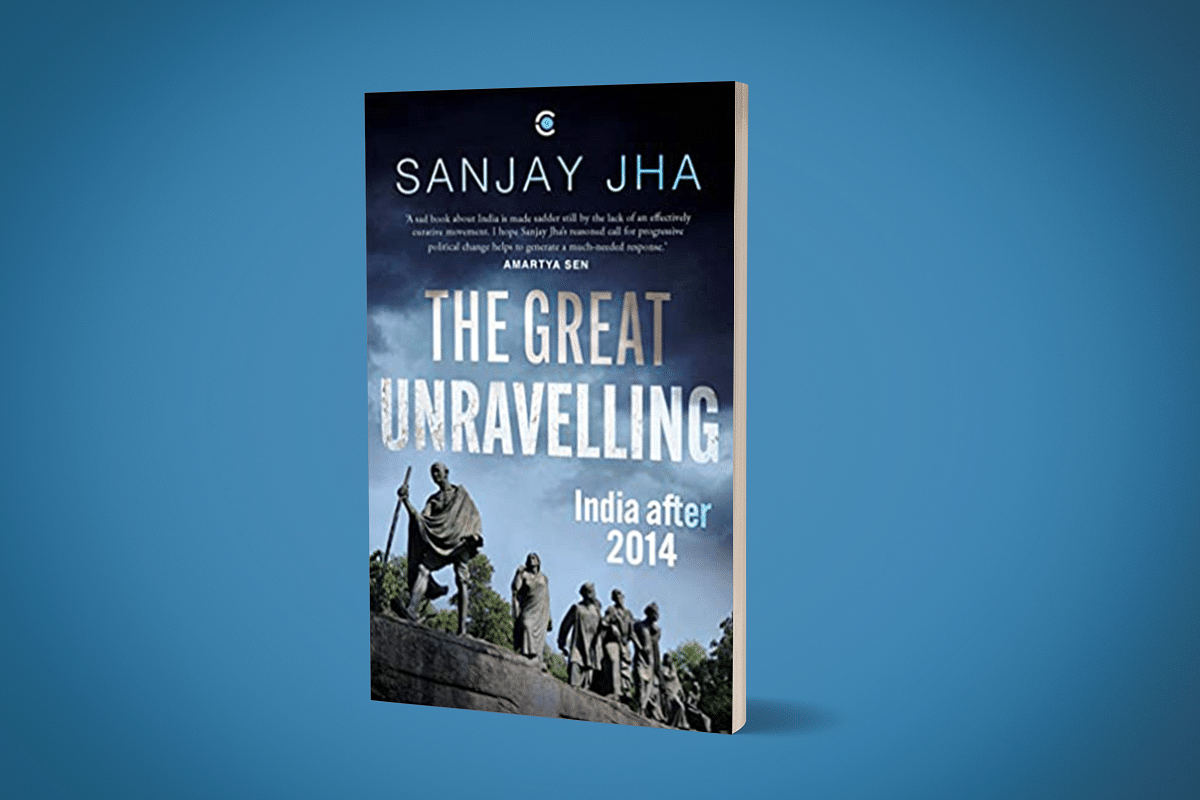 The trouble with being a political party spokesman, defending the indefensible and the partly defensible day in and day out on primetime TV, is that at some point you start believing your own lines and propaganda.

This, in essence, is the problem with Sanjay Jha’s The Great Unravelling: India after 2014, which carries blurbs from Amartya Sen, Barkha Dutt and Rajdeep Sardesai. You know what to expect. The book’s title is a good one, but when you are forced to prove that the unravelling began only after one N Modi got elected as Prime Minister, you are skating on thin ice, frantically looking for facts to fit your narrative.

This book could have been subtitled India after 1967, or 1977, or 1992 or 2008, the last date being when the India growth story started petering out and Andimuthu Raja could decide telecom licensing policy without reference to the cabinet or the Prime Minister.

You could also date the Great Unravelling to 2011, when the India Against Corruption movement sent the UPA (United Progressive Alliance) government to the wall, or you could date it to 2012, when the post-Nirbhaya protests unnerved the UPA and the Indian economy, after being artificially inflated with large fiscal deficits between 2008 and 2011, had to be deflated by cutting down on essential capital expenditures. The economic tailspin can be traced to 2011-12, and not 2014.

In India, if you assume that whatever you believe is true, the same can equally be said of the opposite. If you believe India is unravelling, you will find enough evidence for it at any point of time, for every part of India that look good will have its antithesis in an India that isn’t shining.

Fake narratives can be built on partial “facts” and “limited” truths. You can treat a stone thrown at a church in Delhi in 2014 or the rape of an aged nun in West Bengal as two random incidents unrelated to one another, or as an attack on minorities in general. What you choose to believe tells us more about your own biases than about reality.

Jha’s book should be read not for the truths it contains, but for a lesson on how to use partial truths to create a false narrative. This is what the book does most of the time, even while there is no denying the underlying problems it highlights. Yes, there is a Hindu assertiveness that is widening the communal divide; yes, the economy is in trouble and jobs are currently shrinking; yes, demonetisation did damage the informal sector substantially; yes, institutions need strengthening; yes, the TV media, especially some aggressive channels like Republic TV and Times Now are worsening polarisation within the country even while biased ones like NDTV are quietly fanning false narratives by opting for selective outrage.

But the counter-factuals are many. No, the economic tailspin did not begin in 2014; the structural problems of the Indian economy date back to the UPA era, when practically no reforms were done, and enormous loans were given out to dubious parties who then left banks with piles of bad loans; no, the Modi reforms are not the problem; they were much needed, whether it was Aadhaar-based subsidy targeting or the bankruptcy code, or the goods and services tax, or the latest reforms of farm laws and labour codes; no, the emasculation of judicial independence was not a Modi project; it predated his arrival; under UPA, almost all Supreme Court judges were given sinecures post-retirement with obvious implications for judicial independence; no, the use of former bureaucrats to run the Reserve Bank or the Election Commission was established practice even before Modi was a blip on the horizon (remember one M Singh, or Y V Reddy or D Subbarao; and, most important, the high-growth UPA years did not produce an acceleration in jobs.

The main achievement of the UPA was to spend all the bounties generated from the Vajpayee era reforms and the general global economic uptick on rural largesse (which was good), and when this bonanza was exhausted by 2008, Manmohan Singh resorted to high fiscal deficits to keep the gravy train running for a few more years before it stopped dead in its tracks in 2011-12.

The economic collapse and bad loan issues that surfaced after 2014 were the result of UPA profligacies and lack of reforms.

Jha’s main chapters are titled Hindutva, Narendra Modi, Institutions, Economy, Media and Congress. His thesis is that under Modi, the Rashtriya Swayamsevak Sangh (RSS) is quietly infiltrating many institutions in order to spread its Hindutva agenda.

While he gets apoplectic about this, he does not stop to examine (assuming this accusation is true) whether this wasn’t what the Left-liberal cabal did to institutions in the post-1967 period, through consistent infiltration. If a Jawaharlal Nehru University (JNU) is today stuffed to the gills with Leftist malcontents, why is it a crime to now inject some so-called right-wingers to counter-balance this institutional bias?

Jha’s heart bleeds for the Muslims who get lynched by Hindu gau rakshaks or plain criminals, but he makes no mention of the planned assassination of a Kamlesh Tiwari or Ramalingam, or the RSS workers who have been slaughtered in various states, with no outrage from Jha whatsoever. Outrage is warranted only if it is perpetrated by a Hindu against the designated minorities; not vice versa.

From his book, Jha emerges as an unreconstructed Nehruvian, and he buys the Nehruvian Idea of India as the only valid one for a diverse country like ours. Fair enough.

But any democrat should know that no country can be defined by an idea that many members of the majority community do not accept as fair, where a Citizenship Amendment Act is denounced as discriminatory against one community, but the same “discrimination” practised repeatedly by “secular” governments for decades – the civil code, the Right to Education Act and state control of temples – is not even acknowledged.

If the Nehruvian idea of India has few takers today outside Lutyens Delhi and the international media, it is because the true believers themselves did not believe in it. This is why after 73 years of “freedom”, Muslims are now looking for another Jinnah in the AIMIMs, SDPIs, PFIs, AUDFs and regional Muslim parties, and not the Congress and regional outfits. If Muslims are looking for a new Jinnah, is it the BJP’s fault or the Congress’s?

The Great Unravelling should really be about the collapse of the Congress under minoritarian pressures, and the collapse of crony socialism of the Congress kind. A party that considers itself the essence of India has lost track of what it means to be an Indian, an inheritor of a 5,000-year heritage. It has forgotten that India was a civilisation and not invented in 1947 from ideas slapped together by Nehru or Gandhi or Ambedkar.

Thanks to its extreme diversities, and the rising aspirations of its people, India is always going to be a country of a million mutinies. So, it is not difficult to think that India may be unravelling at any point of time. In that sense, Jha’s idea that India is unravelling after Modi’s arrival may not be completely wrong. India is always unravelling somewhere and emerging stronger from it at another point.

Judgement on the Modi years will have to wait till the end of his second term in 2024, when we will know if his economic and political reforms, and the Hindu assertiveness that coincided with his emergence, are doing us good or not. Right now, the jury is out on this issue. But what is surely unravelling is his own party, the Congress, where he is currently a non-person due to his demand for internal reforms.