The Liberal Project Needs Rescuing. But How Did It Get Here? 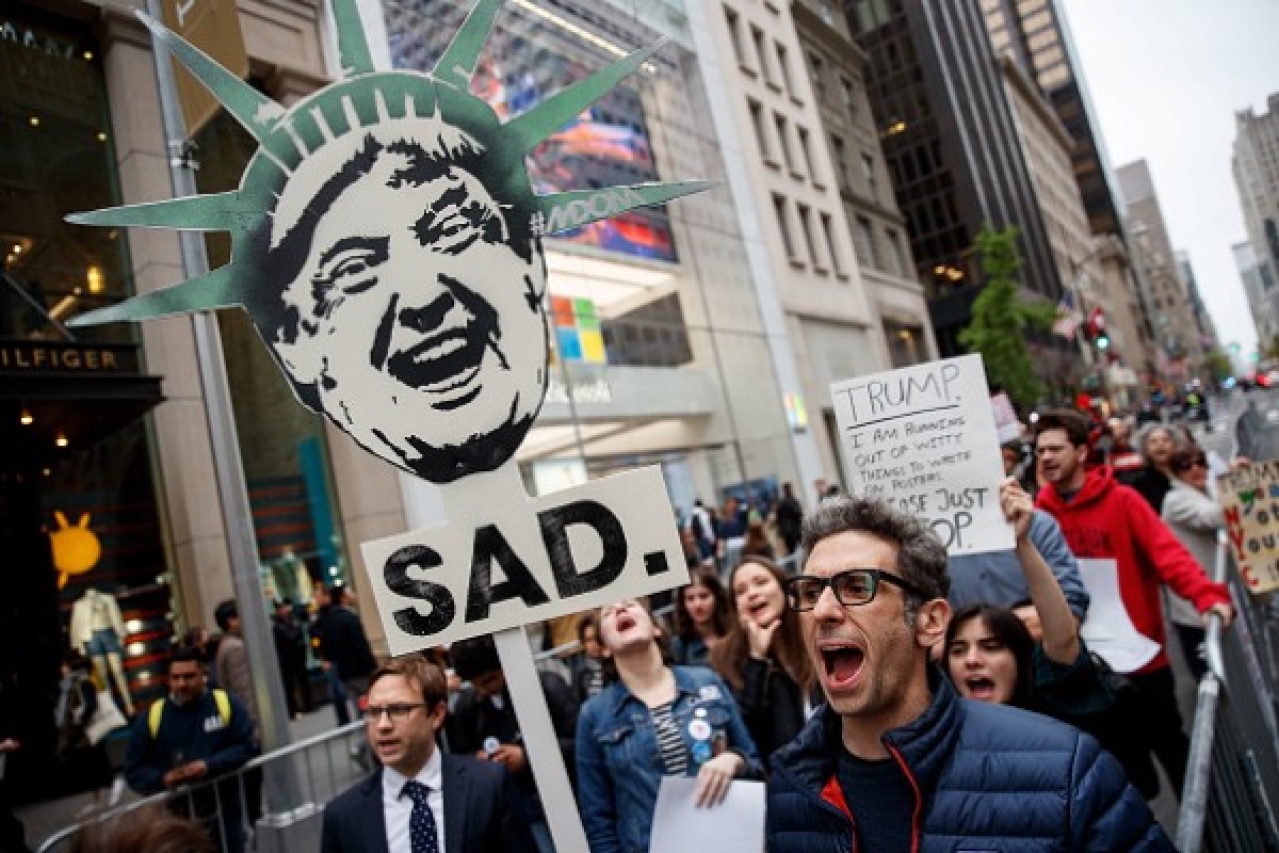 Protestors rally against President Donald Trump and his policies down the street from Trump Tower in New York City. (Drew Angerer/Getty Images)

The paradox of liberalism, ultimately, is that it isn’t. And Edward Luce’s latest book, The Retreat of Western Liberalism, is a perfect synecdoche of the entire problem. Despite its grand title, Retreat was clearly written in a moment of cathartic anguish following Donald Trump’s victory in the American presidential elections of November 2016, and consequently cleaves dearly to that moment. As such, it presents a limited yet sharp analysis of the problems besetting American – and perhaps, to a lesser extent, Western – liberalism and offers some preliminary solutions. This introspection is certainly a welcome development for liberal refugees on the centre and right who were feeling more and more alienated by the recent tone and politics of the Democratic party.

Luce divides his book into four sections. The first explains the impact of globalisation and technology on Western economies; the second explores the effect these corporate and international forces have had on domestic politics – I suppose Britain may, after all, be considered as the first US state; the third part of the book follows from the first and second in considering the loss of Western hegemony and its repercussions; finally, the fourth segment concludes with some suggestions towards a resuscitation of the Western liberal project.

Much of what Luce pontificates on, however, has to some degree been covered in the thousand and one opinion pieces that have flooded newspapers since 8 November last year, and this latest book-length treatment of the subject has little that is particularly new or noteworthy. However, the greater length allows for a fuller exploration and contextualisation of the materialist failure of liberalism. In this, Retreat does not disappoint – the pace is brisk, the concepts are simple, and the language clean. Luce is adept at deploying powerful anecdotes to persuade readers of his message, my favourite being when Henry Ford takes his union leader, Walter Reuther, around a new factory floor. Ford points at the robots in his factory and quips: “How will you get union dues from them?” Reuther replied: “How will you get them to buy your cars?”

Luce leans heavily – one might say solely – on economics to explain the erosion of liberalism in America and the West. Increasing unemployment, falling wages, and inflation have fuelled starker inequality and impoverished the middle class. According to the Toil Index, in 1950 it took a labourer 45 hours per month to earn enough to pay his monthly rent; a generation later, it had edged up to 56 hours. Today, it is up to 101 hours. To make matters worse, liberal identity politics has left the white-majority bourgeoisie feeling neglected by their leaders in lean times. It is these disgruntled masses that have turned their backs on the liberal establishment that has failed them. As Daniel Bell once wrote, economic growth is the secular religion of advancing industrial societies. Luce adds, “We are taught to think our democracies are held together by values. Our faith in history fuels that myth. But liberal democracy’s strongest glue is economic growth... the West’s souring mood is about the psychology of dashed expectations rather than the decline in material comforts.”

A materialist explanation does clarify the rightward drift of the electorate to some extent, but values, beliefs, and world views – the sort of stuff Luce only ephemerally alludes to – is exactly what has made Western liberalism blind to the rot within it and what makes Retreat a smaller representation of the larger whole. The inability to understand how the world might look from a different vantage point is the ultimate failure of Western liberalism as well as this book.

Non-Western readers will be jarred by Luce’s grasp of world history, especially when he suggests that the Raj “gave benighted lower-caste Indians the chance to read and write” or “protected upper-caste widows from sati” – as if the purpose of the Raj was to save upper-caste widows and the lower castes! According to Luce, “Europe’s economic success was chiefly driven by technological superiority rather than by a fit of immoral looting.” What is given a miss is that it was the superior technology that facilitated the immoral looting.

Luce’s view that China “rarely sought to export its model by force or colonise other lands” is another googly but one that is quickly forgotten when he absurdly suggests that the Chinese invasion of India in October 1962 was merely Mao Zedong attempting to rectify China’s century of humiliation – not even the Chinese Communist Party could expect a better narrative of history. In Luce’s defence, it is not just Asian history he seems to have trouble with. “Sparta opted for war with Athens and lost,” we are informed. Anyone with such a poor grasp of history should not be allowed anywhere near a stylus, quill, or keyboard.

Despite these ultimately minor – as far as they affect the main argument – shortcomings, Luce presents a persuasive case for why liberals have abandoned their faith. Liberalism has indeed retreated – but more by apostasy in its ranks rather than the swelling numbers counted among opposite ideologies. It is tempting to see Retreat as a disappointment for its failure to seize the opportunity to ask the really big questions about modernity and liberalism in an era of the “rise of the Rest”, but to do so would only be to fault Luce for his book the way I would have written it. 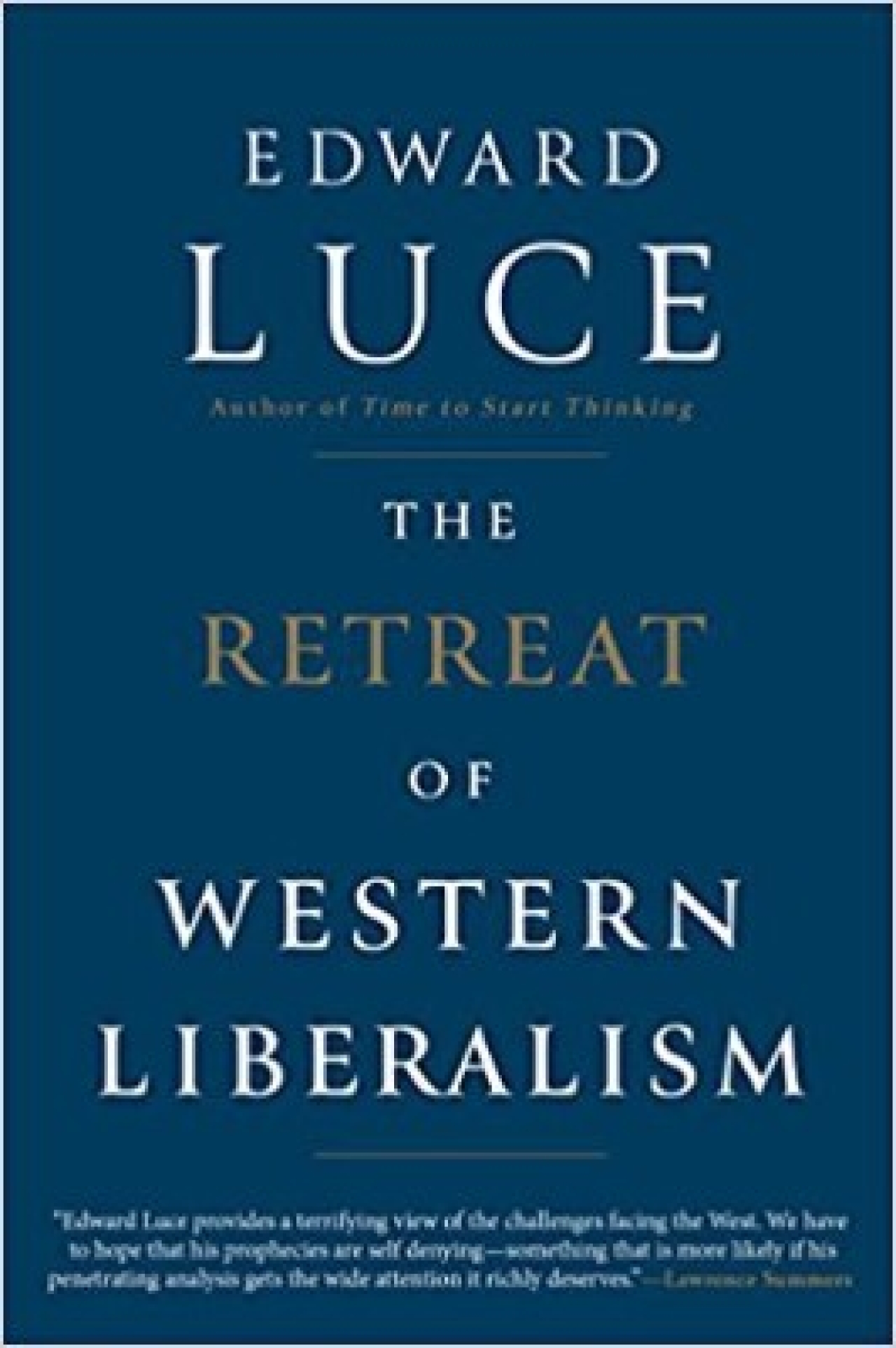 It is indeed true that the Western liberal democratic model has struggled to find new adherents in the non-West. Luce lazily infers that this is because America’s decline and China’s rise have shown regional despots an alternative. While this may be true in certain instances, it seems unfathomable to Luce that there might be something wrong with the Western model itself – that it is designed to perpetuate the hegemony of Europe and its descendants.

The fundamental challenge to Western liberalism is the proposition of an alternative modernity. What if there were a modern system of rule that might not necessarily have the same freedoms the West worships but provides greater harmony and pluralism? To the West, “freedom” of expression and religion are little short of evangelising missions and understandably so – whether it is in the Utopia of Thomas More, Voltaire’s Candide, Rabelais’ Thélème, or a dozen other scenarios by Daniel Dafoe, William Morris, Jonathan Swift, or Charles Fourier, a characteristic feature of utopias is that they must either be universal or be completely cut off from the outside world. Western liberalism, like Christianity and Islam, have chosen the former path of universalism. An alternative is therefore a challenge, a threat that must be eliminated.

As a result, liberalism comes with a bulleted agenda rather than an inquiring, adaptive mind. Here, the right has the correct spirit – Thomas Sowell described the right wing as united only in the sense that it was opposed to the left, but was in fact a conglomeration of diverse ideas that simply did not find room in the leftist world view. The right thus has more of an attitude of scepticism than a political philosophy or platform and hence its frustrating diversity to political operatives and theorists. One might expect liberals to be liberal – please, forgive the naïveté – but that trait seems to have a higher statistical probability among the right.

Admittedly, constantly debating the fundamentals from first principles is a frustrating affair and liberal reluctance to reinvent the wheel, as it were, is understandable. However, each epoch must find its own balance – between communitarian and individual, public and personal, freedom and harmony – rather than see governance as a teleological project. To be fair, the linearity of history and the narrative of progress are not just a liberal idiosyncrasy but a Western one in general.

These are just some of the bigger questions that have been thrown up by the rise of China and India over the past couple of decades. As these societies continue to grow economically – and almost certainly militarily – there will be an interesting play between different value systems. This is not quite the clash of civilisations as Samuel Huntington might have imagined it – because the hard absolutist edge is a rarer cultural trope in pre-Mosaic turn societies – but there are bound to be some sharp gradients.

Retreat does not dwell on the questions liberalism will face in the coming decades, but subconsciously focuses on the next presidential election in the United States. Some readers may see this as a deficiency, but the very absence of the grand narrative nudges the conscientious reader in that direction. It was clearly not Luce’s intention to bludgeon his audience with a heavy and serious tome, but he does present the opportunity for such discussions for those who wish it. On the whole, The Retreat of Western Liberalism, though sharply limited in its scope, is well worth a read.