The Link Between Islam And Terrorism, Explained 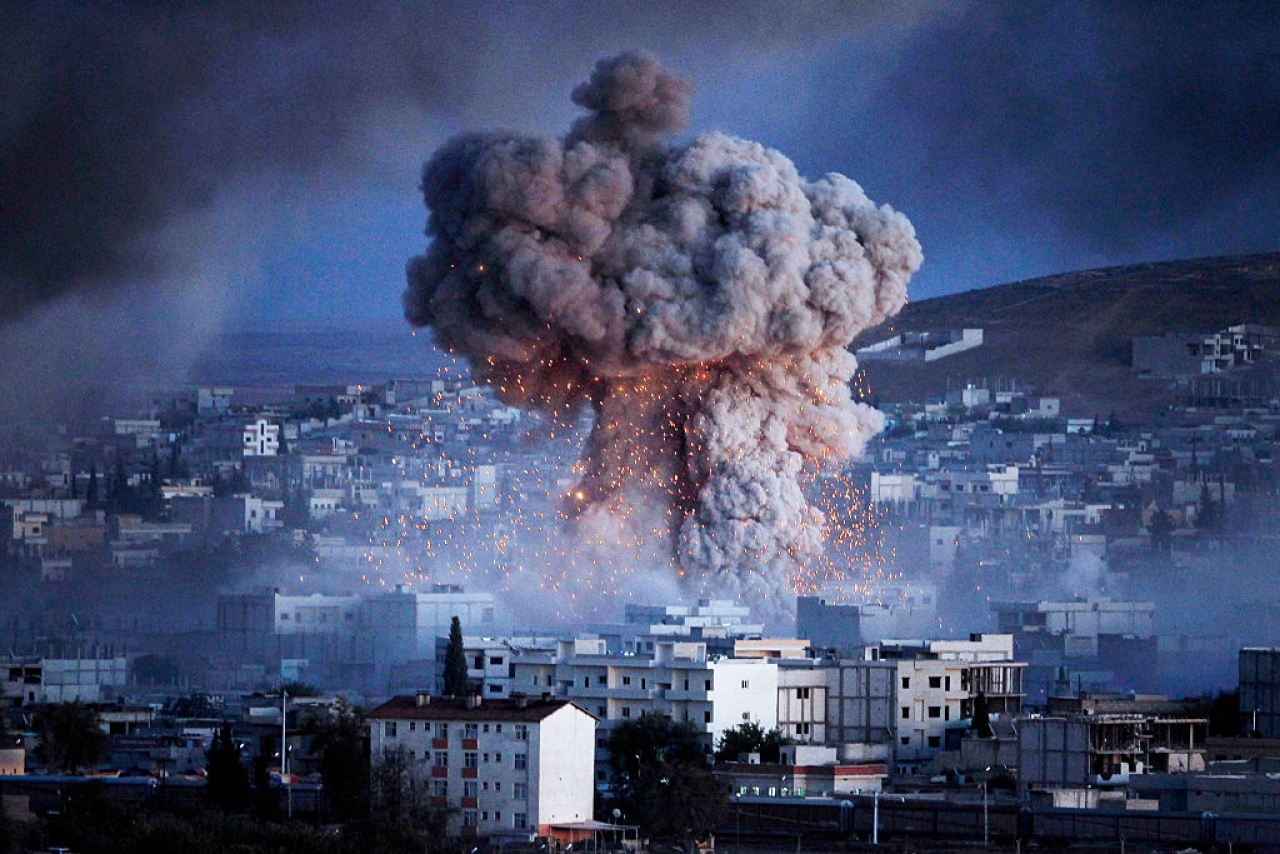 An explosion rocks Syrian city of Kobani during a reported suicide car bomb attack by the militants of Islamic State (ISIS) group on a People’s Protection Unit (YPG) position in the city center of Kobani, as seen from the outskirts of Suruc, on the Turkey-Syria border, October 20, 2014 in Sanliurfa province, Turkey. According to Foreign Minister Mevlut Cavusoglu, Turkey will reportedly allow Iraqi Kurdish fighters to cross the Syrian border to fight Islamic State (IS) militants in the Syrian city of Kobani while the United States has sent planes to drop weapons, ammunition and medical supplies to Syrian Kurdish fighters around Kobani. (Photo by Gokhan Sahin/Getty Images)

The most pressing problem occupying world leaders today is the threat of Islamic terrorism and domestic radicalisation. The realm of analyses, however, has become a toxic and vitriolic cacophony of voices that say more about the source than the subject. Amidst the deluge of Islamophobic drivel, politically correct inanities, and unconscionable apologiae for regressive, barbaric acts, Shiraz Maher's Salafi-Jihadism: The History of an Idea comes as a breath of fresh air. Rather than attempting to explain the entire panoply of beliefs and customs under Islam, Maher restricts his analysis to the singular idea that has caused the most disruption in the international community – Salafi-Jihadism.

Maher's work is the result of his research at the International Centre for the Study of Radicalisation, King's College, London, and it certainly benefits from his rare qualification – among researchers – of having been a member of a pan-Islamic organisation, Hizb ut-Tahrir, that supports the strict implementation of sharia law and the establishment of an Islamic caliphate. His familiarity with the sources, debates, rhetoric, and volksgeist is, therefore, as an analyst as well as a former practitioner.

Islamic schools of thought are described with a delicacy that has not been a common feature of public discussions. The author, for example, separates Salafis from the larger body of Muslims and proceeds to distinguish between a quietist strand and a violent faction. Salafi, by the way, is derived from the Arabic salaf, which means ancestor and refers to the first three generations of Muslims; Salafism wishes to recreate society in the image of those early days of Islam.

In essence, while all Muslims are not necessarily terrorists, all Salafis are, by definition, regressive. Regardless, it is possible to be a Salafist and non-violent as much of the Saudi Arabian clergy has been, particularly the Al-Sahwa Al-Islamiyya movement. This group advocates for the implementation of its world view through engagement with state institutions and, sometimes, even democratic practices.

It is the violent Salafists that have held the world's attention and are the subjects of Maher's study. Five key concepts define salafi-jihadists from other Muslims: jihad, takfir, al-wala’ wa-l-bara’, tawhid and hakimiyya. Some of these, like tawhid (unity of god) are common across Islam but Salafist interpretation ties it to manhaj (method by which truth is reached). According to one of the icons of Salafism, the 13th century Islamic scholar Ibn Taymiyya, the first obligation of a Muslim, after iman, is the repulsion of the enemy aggressor. Thus, jihad becomes an inseparable companion to tawhid.

Maher demolishes the argument that jihad only means an inner struggle by demonstrating the externally aggressive interpretations of the term throughout history, starting from Mohammad himself. The breadth of his arguments also put to rest any attempts to dissociate Islam from the actions of those who commit terrorism in its name.

The justification for the acts of terrorism are repeatedly given with the support of scripture and Islamic jurisprudence. As a result, it becomes that much more difficult for apologists to cling to the view that the violent chaos in the Middle East and Central Asia has nothing to do with Islam. Wisely, the author does not wrangle with whether a certain view is "correct" – he leaves that to the theologians and philosophers, instead sticking simply to precedent and historical, juridical, ideological, and political connections between tawhid and jihad.

Advertisement
The cover of Shiraz Maher’s book Salafi-Jihadism: The History of an Idea

The violence of jihadists against fellow Muslims is explained by takfir, the process by which a fellow Muslim is declared outside the fold of Islam. For Salafi-Jihadists, enormous sections of civilian society are takfiris – secularists, democrats, nationalists, Ba'athists, and communists. The Shia especially are eternal enemies of Islam who are linked via the Safavids to Ali. Takfir, as Maher observes, homogenises the faith by shutting down all debate.

Yet what makes some of the Salafist-Jihadists so exceptionally brutal? Why did they, for example, burn a Jordanian pilot when the Quran is clear that the use of fire for punishment should only be left to god? Maher states that the answer can be found in the Salafist interpretation of qisas, the law of equal retaliation. He explains how the West, in toto, is seen as the enemy for their role in supporting tyrannical or insufficiently Islamic governments in power over Muslims. Additionally, since Western governments are democracies, their policies imply the consent of their people and thus, their civilians are also legitimate targets in the struggle for an Islamic world order.

In conjunction with al-wala’ wa-l-bara’, Salafi-Jihadists become a sect incapable of compromise. The Arabic term, loyalty and disavowal, allows for a clear separation between Muslims and the 'Other'. Since any understanding or coexistence with the 'Other' opens one up to accusations of takfiri, Salafi-Jihadists are able to maintain the purity of their faith.

Finally, hakimiyya demands the securing of political sovereignty for god. Effectively, this pits Salafi-Jihadists forever in battle against the kuffar for it is inconceivable to universalist faiths that there be a limit to the domain of their deen – religion – and coexistence with others, even if they are only ahl al-kitab – people of the book, namely Christians and Jews. It is no coincidence that the negative experiences of colonialism, an imposition of modernity, and Cold War alliances fuelled resentment against the West.

The real test of theory is when it meets reality, and Maher is the first to admit that many of the Salafist doctrines are evolving due to changing conditions on the battlefield. There appears to be a divide, however, more between theorists and practitioners rather than between the various terrorist factions. The irony of this situation is, as the author points out, that bida', or innovation, is anathema to religious purists.

Reading Salafi-Jihadism, it is difficult not to get the deeply uneasy feeling that Salafi-Jihadism is perhaps what an Islamic Reformation may look like. The furious debate between the Islamic scholars that Maher extensively cites are reminiscent of John Calvin's Geneva, and one remembers only too vividly what followed over the next 100 years. This is a sad note for those who hope to see liberalising reforms come from within the Islamic fold.

Perhaps one aspect that might have preemptively answered a question readers are bound to wonder upon reading this book is the point at which quietism transitions into violent jihad. Furthermore, what are the implications – in terms of stability and security – to the international community of living with a radicalised yet quietist Salafist state? A clash between the universalist and interventionist impulses of the Left and such a state seems inevitable, especially given the recent fads in international relations such as the Right to Protect.

Salafi-Jihadism balances scholarship with an ease of access that will endear it to both, the lay reader as well as specialists. The author's harsh yet honest appraisal of the role of Islam, albeit one specific strand, in inspiring the unending brutality and violence is a must-read for anyone seeking to be better informed about the crisis of our times.

Advertisement
Jaideep A. Prabhu is a specialist in foreign and nuclear policy; he also pokes his nose in energy and defence related matters.
Get Swarajya in your inbox everyday. Subscribe here.
Tags: