A Cup Full Of Woes 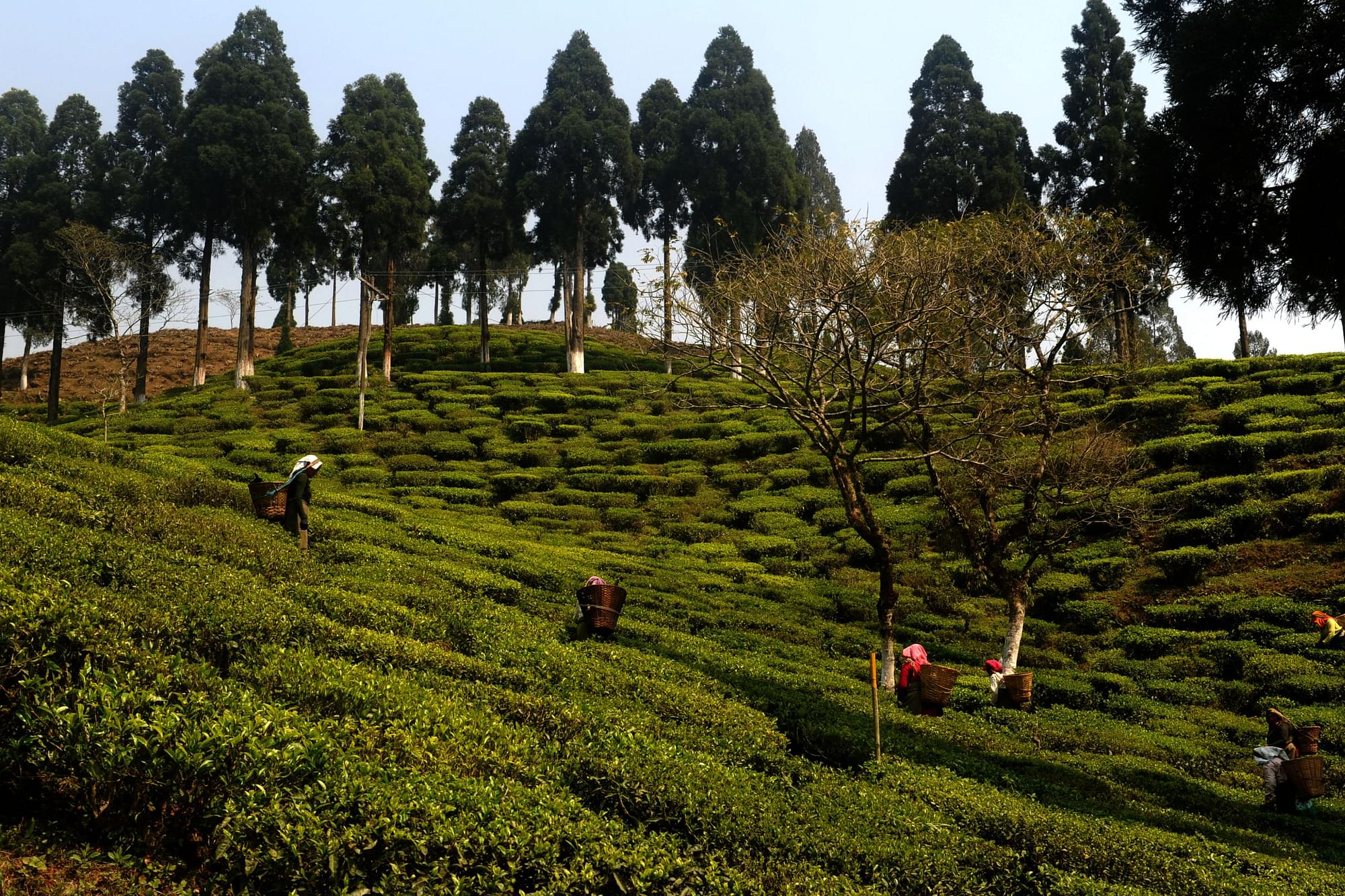 Labour trouble and shortage is posing a grave threat to Darjeeling tea.

The prized Darjeeling tea, often referred to as the ‘champagne of teas’, could soon lose its sheen and exclusivity. A combination of factors, mostly induced by man, is causing deep distress to this first GI (geographical indication)-tagged produce in India. Climate change, stricter banking norms, a debilitating shutdown last year, labour shortage, irresponsible trade unionism and competition from tea grown in Nepal are posing an existential threat to the 87 Darjeeling gardens that produce about 9 million kilograms of the fine tea.

The biggest body blow to Darjeeling tea was dealt by the 104-day Gorkhaland agitation
from mid-June to late-September last year. That was the peak season for the gardens when the finest quality of the tea - the second flush - that commands a premium is produced. “We are still reeling under the huge losses incurred last year. Not only did the gardens lose out on producing the entire second flush crop, which contributes about 30 per cent of a garden’s earnings, but also the monsoon crop. And when the gardens reopened in early October, a lot of work had to be done and they became operational and ready for harvesting only in the beginning of this this year,” said Darjeeling Tea Association (DTA) secretary Kaushik Basu.

Basu explained that the long and forced closure of the gardens resulted in overgrowth of tea bushes. Left unattended, weeds grew wildly and sucked away nutrients from the soil, thus weakening the bushes. After the strike ended, the bushes had to be pruned and workers had to wait for a few weeks for new buds and leaves to appear. And soon enough, winter - when harvesting the crop stops completely - set in. The gardens suffered a 67 per cent loss in production and, in monetary terms, over Rs 500 crore.

Due to the inability of most gardens to service debts and repay loans, including working capital loans, because of the huge losses incurred last year, the much-needed flow of credit dried up this year. DTA chairman Binod Mohan says that banks had decided at the start of the production season this year not to renew credit limits and due to inability of many tea companies (which own gardens in the hills) to service debts, their rating have been downgraded by the banks. “This downgrading of rating of tea companies has made it difficult for many companies to get working capital loans,” said Sanjay Bansal, chairman of Ambootia group which owns ten tea gardens in the hills.

The stricter lending norms set by the Reserve Bank of India (RBI) also caused enormous distress to the Darjeeling tea gardens. Allahabad Bank, UCO Bank and United Bank of India have been, traditionally, the main lenders to Darjeeling tea gardens, but came under the RBI’s prompt corrective action framework in 2017 due to their high sticky assets and, as a result, they have been stopped from extending credit to lower rated borrowers (like the Darjeeling tea companies). The tea companies also did not have stocks to borrow against or have already exhausted their earlier borrowing limits due to the severe financial stress last year, said Bansal.

To make matters worse, the weather has played foul this year and caused a 15 per cent to 20 per cent drop in production of the premium first and second flush teas which generate up to 70 per cent of a garden’s annual earnings. “About 40 per cent to 50 per cent of the total crop produced in a Darjeeling garden, mainly the monsoon and autumn flushes, fetch very low prices which are unprofitable. It is only the first and second flush teas which get good prices. This year, the second flush suffered due to heavy rains in May and June (the second flush season) and lack of sunlight due to continually overcast skies. Rainfall was also erratic in March and April (the first flush season). Thus, all the gardens in Darjeeling are bleeding,” said DTA principal advisor Sandeep Mukherjee.

Climate change is another factor that is adversely affecting the quantity and quality of Darjeeling tea. According to a study spanning two decades carried out by the Darjeeling Tea Research & Development Center between 1993 and 2012, the maximum temperature rose by 0.5 degree celsius and the total annual rainfall dropped by 56 mm while relative humidity decreased by 16.07 per cent during this period. As a result, yield also dropped from 1828.47 kg per hectare to 1061.12 kg per hectare. “Rainfall has become very erratic and very often, it rains very heavily, resulting in erosion of the topsoil and causing distress to the tea bushes. The erosion of topsoil and weakening of tea bushes leave them vulnerable to attacks by pests like the red spider, mites, tea mosquito bugs and blister blight. Damage to crop by pests has increased in recent years,” said Mrityunjay Choubey, senior researcher at the centre.

DTA secretary Kaushik Basu says that in the past, the first flush season began in early March and continued till end-April and mid-May. “But we have noticed now that due to temperatures rising from early February itself, the buds in the tea bushes break in mid-February. This affects the quality of the first flush crop. Heavy rains in May this year caused dormancy in the leaves and thus affected the second flush crop,” he said. The total production of Darjeeling tea has fallen from 10.5 million kg in 2012 to 9 million in 2016.

The monsoon and autumn tea from Darjeeling Hills is of low quality and does not fetch good prices. Almost all of this tea is bought by large buyers from auctions and sold as moderately priced packaged Darjeeling tea in India and some overseas markets. But if these major buyers start procuring Nepal tea, which is cheaper and at times better than Darjeeling tea, the tea gardens in Darjeeling Hills will face closure. Tea sold through auctions does not fetch good prices and Darjeeling tea gardens depend heavily on private sales, especially to overseas buyers, to bring in their profits and stay afloat. If all, or most of the tea, produced by Darjeeling gardens were to be sold through auctions, all the gardens would go into the red.

The tea grown in the higher altitudes in Ilam is of very good quality. “The bushes, grown from clones taken from Darjeeling, are young and yield is good. Once they (the Nepal tea growers) perfect their manufacturing and other processes, ‘Himalayan Tea’ will give Darjeeling Tea a run for its money. Even tea produced in Temi in neighbouring Sikkim - the bushes here are again clones of the Darjeeling bushes - is of very high quality and very similar to Darjeeling tea. Most of the tea produced in Temi is exported and fetches a very high price,” said Rajah Banerjee, the former owner of the iconic Makaibari tea estate (read this).

Labour trouble and shortage is yet another major factor that is posing a grave threat to Darjeeling tea. Almost half the labour force of 70,000 workers - 5,000 permanent and 15,000 temporary who are employed during the plucking season from March to November - have been absent this year, says the DTA. That is because other jobs provide higher wages and, also, because the children of tea garden workers are educated and don’t want to work in the gardens. “Their aspiration levels have risen and they seek white collar jobs. The 100-day job scheme (National Rural Employment Guarantee Act) pays more (Rs 191 a day) than the Rs 176 a day a worker earns in a garden (of course, if other benefits like free housing, rations, firewood, healthcare and statutory obligations like provident fund are taken into account, the wage comes to an additional Rs 325 per day). But the cash component of a tea garden worker’s wage is less than what is given under the 100-day job scheme. That is why many workers opt for the job scheme,” says DTA’s Mukherjee. He added that many workers who had gone away from the tea gardens in search of jobs during the prolonged closure last year have not returned.

Workers’ unions have been demanding higher wages, but owners of the beleaguered gardens say they are in no position to comply. The unions have also been making unreasonable demands like payment of wages for the 104-day closure last year. “How can we pay the workers for no work, especially since all the gardens incurred such huge losses? They also demanded high bonus during the pujas this year. This is completely unreasonable and if the workers don’t behave responsibly, gardens will shut down,” said a tea garden owner.

Ashok Kumar Lohia, chairman of the Chamong Tea Group that owns 13 gardens, warns that due to last year’s turmoil in the hills, Darjeeling tea has become unreliable as a brand to big global buyers. Anil Bansal of the Ambootia Group fears that many estate owners may not survive the current crisis and may have to sell off their gardens or shut them down. Rajah Banerjee predicts that while many tea factories will shut down and ownership of estates will change, Darjeeling tea as a brand will suffer, perhaps irrevocably. And that will be a sad day indeed for this champagne of teas.

In 1839, Dr Archibald Campbell was appointed as the Superintendent of Darjeeling and he brought a few tea saplings and planted them at Kurseong. Captain Samler, a renegade from the East India Company’s army, stole some of these saplings and replanted them in the area he and his men were hiding near Kurseong (this is where the Makaibari Tea Estate stands now). The tea bushes grew well and commercial production started in 1856. Samler was pardoned for helping the British Crown during the 1857 revolt and became the legal owner of Makaibari Tea Estate.

Makaibari was then bought from Samler by Rajah Banerjee’s grandfather Girish Chandra Banerjee in 1858, who set up the first tea factory in the Darjeeling Hills that very same year.

Other tea gardens like Tukvar, Aloobarie, Lebong, Margaret’s Hope, Ambootia and Badamtam were established in quick succession. By 1915, there were 156 tea estates spread over 54,000 acres in the Darjeeling Hills. Today, there are 87 estates with a little over 44,000 acres under tea plantation. There are 72 tea factories in the Darjeeling Hills today.