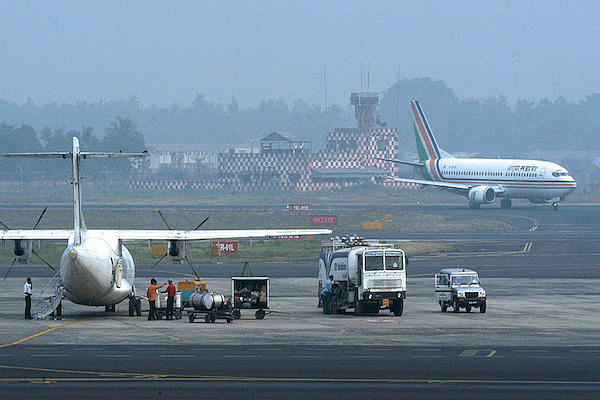 Friday (17 June) became another sad day for West Bengal. A single, Air India flight to Kazi Nazrul Islam Airport at Andal near Durgapur, the steel town of West Bengal, logged off from the airport. The withdrawal of services by the national carrier due to low passenger count, from eastern India’s first greenfield airport and India’s first aerotropolis, is yet another sad commentary on the state of economy in West Bengal.

This stoppage of services, ironically, was in the week that saw unveiling of new civil aviation policy. The new policy aims to connect regional airports and has announced a number of business-enhancing measures.

Meanwhile, the Air-India’s withdrawal of services nails the lie routinely dished out by Mamata Banerjee, that West Bengal has been receiving investments worth thousands of crores of rupees. If that were the case, many more passengers would be flying to and from Andal airport- which was meant to service West Bengal’s industrial and mining belt of Raniganj, Asansol, Durgapur and Burdwan.

In early January this year, at the state’s annual business jamboree, Mamata boasted investments to the tune of Rs 250,104 crore. She also announced that of Rs 243,000 crore investment promised last year, proposals worth Rs 95,000 crore have already materialised. But no one, including West Bengal’s Finance and Industries Minister Amit Mitra, is willing to spell investment details.

According to Mamata, West Bengal has attracted investments worth more than Rs one lakh crore since she took over the reins of the state in 2011. State government spokespersons say that a major slice of these investments has been in the infrastructure and manufacturing sectors, especially in the state’s industrial belt. But the story of Andal airport’s failure gives the lie to their tall claims.

Commercial operations at Andal started on 18 May 2015, a few days after Prime Minister Narendra Modi flew out of the airport on a special flight to Delhi. Initially, Alliance Air (a subsidiary of Air India) operated a 44-seater ATR-48 aircraft between Kolkata and Andal. From 21 December 2015, Air India introduced a 144-seater Airbus-319 aircraft on the Kolkata-Andal route and extended the flight to Delhi. In a bid to promote this flight, Mamata Banerjee flew from Andal to Delhi along with a host of invitees.

But the thrice-a-week flight never became a commercial success. Air India says that only a handful of passengers would fly from Kolkata to Andal and the Andal-Delhi sector would record about 85 passengers on an average. At least 100 passengers are required to make this flight commercially viable. Also, the private promoters of the airport-Bengal Aerotropolis Projects Ltd (BAPL)- had promised to pay Air India the fares for the vacant seats on every flight out of Andal. But this promise of “viability gap funding” was never kept, and BAPL now owes Air India over Rs four crore.

Two non-scheduled operators, Spirit Air and Pinnacle Air, had also withdrawn their flights to Andal, citing a very low passenger count. Industry sources say that there are serious doubts about the sector doing well in West Bengal’s industrial belt, if less than 300 people fly in-and-out of Andal in a week. Said an industrialist, who did not wish to be named, “If the industrial sector had been booming in Bengal and had all those investments materialised, Andal would have definitely seen more passengers.”

With Andal out of the radar, West Bengal has just two operational airports at present, Kolkata and Bagdogra. The neighbouring state of Assam has, by comparison, six operational airports with regular commercial flights- Guwahati, Tezpur, Lakhimpur, Jorhat, Dibrugarh and Silchar. Many flights to these places are over-booked, and all flights record a passenger country of 80 percent to 90 percent throughout the year.

Bagdogra relies almost entirely on tourists visiting the Darjeeling hills and Sikkim. It also relies on the Armed Forces’ officers, stationed in army bases in North Bengal. Very few passengers flying into or out of Bagdogra are business travellers. The Kolkata airport, too, has a low count of business passengers, and many international airlines have cited lack of business class and first class passengers from Kolkata, for staying away from the city. The reason for this dearth of business travellers is apparent - lack of industry and industrial activity in the state.

Mamata Banerjee, of course, blames the Union government for foreign operators giving Kolkata a wide berth. Terming Air India’s decision to log-out of Andal “unfortunate”, she said that the Center (Union Government) was not doing enough to “bring European flights to Kolkata”. “I have been asking for European flights from Kolkata. But not a single one has been given,” she said, with her customary pout.

Mamata Banerjee needs to educate herself that it is not up to the NDA government at the Center to ask private airlines to fly to Kolkata. “If Kolkata has enough passengers travelling to international destinations, especially business and first class passengers, foreign airlines will land in Kolkata. No one will heed any government’s request to include a city in its flight itinerary. Market forces will determine that,” said a senior Air India executive.

The bottom line is Mamata Banerjee’s West Bengal does not have enough air travellers flying to international destinations. Her industrial hub doesn’t have enough passengers flying to Kolkata or Delhi. So what is she talking about when referring to investments in “booming Bengal”?

Unwittingly, perhaps, she provided the answer about two years ago when asked about the state of West Bengal’s economy. “Economy in my state is booming. Look around you and see. Even the “telebhaja” stalls (roadside kiosks selling fries and fritters) are doing very well,” she had infamously said. Well, the people owning such successful telebhaja kiosks are not air travellers!