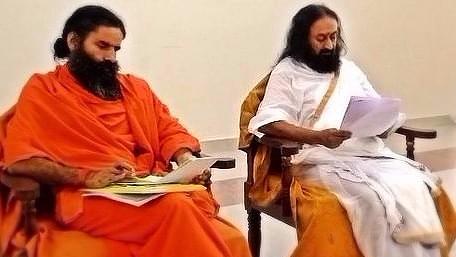 Yoga guru Baba Ramdev and Art of Living founder Sri Sri Ravi Shankar, two of Hinduism’s biggest brand ambassadors, are building viable business models around themselves. This is good news for the longevity of their spiritual-cum-business institutions, making it easier to take on the organised nature of the Abrahamic proselytising faiths, which are essentially driven by strong marketing strengths and a business model that can sustain their expansionist visions.

The Catholic and Protestant churches of Europe and North America are built around business models, and not just humble contributions from believers. Churches invest billions of dollars and euros in businesses, and this is what gives them sustainable revenues to carry on their proselytisation activities come what may. Thus the Vatican Bank, generally very scandal-ridden, has assets of over $64 billion (this is not counting the Vatican state’s own finances), while American pastors are even richer, counting themselves as millionaires many times over (see the pastoral millionaire list here).

In contrast, the wealthiest Indian temples – Tirupati and most of the ones in south India – are controlled by the state, with the southern states alone running over 100,000 temples and controlling revenues running into several thousand crores. The state thus appropriates their revenues for purposes beyond just running those temples.

This is where the business models of gurus like Baba Ramdev and Sri Sri Ravi Shankar become crucial, for, unlike temples, these institutions are quasi-commercial organisations, and cannot be easily taken over by the state in the name of serving devotees.

They are thus laying the foundations of a self-supporting Hindu eco-system bankrolled less by devotees, and more by customers, only some of whom may be devotees. The business model also lays the foundation for global expansion.

A few days ago, Patanjali Ayurved, Baba Ramdev’s FMCG-cum-ayurveda business, announced that it had gatecrashed the Rs 10,000 crore revenue barrier in 2016-17 – the year of demonetisation, when FMCG sales went into a tailspin towards the end of the year. By reporting sales of Rs 10,561 crore, it is now No 2 in the FMCG space, with only Hindustan Lever ahead at Rs 30,782 crore (trailing four-quarter revenues), according to a report in The Economic Times. Nestle, with Rs 9,159 crore, has been overtaken, and so has ITC, which includes cigarette sales in its Rs 10,336 crore turnover.

“So far, FMCG has meant MNCs in India; we have broken that monopoly. Global CEOs are sleeping peacefully saying that Patanjali’s market share is small. But that is not true. We are leaders in many categories already,” says Baba Ramdev. He pointed out that even in toothpaste, where Colgate in supreme, Patanjali’s Dant Kanti has a market share of 14 per cent.

Patanjali hopes to double its turnover again in 2017-18, which will be tough, given the larger base on which it has to grow. And while market analysts doubt if that can be done on the back of a weak rural market and on an already large revenue base, its track record suggests that it is not impossible. In 2015-16, Patanjali grew 150 per cent, followed by 100 per cent last year. Even if it does 70 per cent next year, it will be over Rs 17,000 crore in terms of revenues.

That will make Baba Ramdev a multi-billionaire many times over, with a net wealth possibly in the region of Rs 100,000 crore after March 2018.

At Rs 206,000 crore, Hindustan Unilever’s market valuation is about 6.7 times sales. At Rs 17,000 crore next year, if we give Patanjali a similar sales multiple, the market valuation would be around Rs 113,000 crore. It would make Baba Ramdev India’s second wealthiest individual in terms of personal valuation – at around $17 billion, $5 billion below Mukesh Ambani (currently at $22.7 billion in the Forbes India Rich List), but ahead of Sun Pharma boss Dilip Shangvi and Azim Premji of Wipro.

While there are no plans to list Patanjali in the near future in order to realise these valuations in terms of share prices, Baba Ramdev has gone on record to say that his company would always be headed by a “sanyasi and not a businessman, even after me,” The Economic Times quoted him as saying.

That statement holds the clue to why Patanjali has been so successful in such a short period. In India, a sanyasi will always be trusted more than a businessman. And in order to keep a balance between spiritual and temporal interests, you need to combine the two. Without his yoga guru status, Patanjali would be nowhere in terms of FMCG rankings.

Baba Ramdev’s success has had several strands to it, and this is useful learning for other spiritual entrepreneurs, of which India has plenty.

First, he positioned himself as the mass market yogi, and built a yoga following that catered to the masses rather than the classes – which is where you would find a Sri Sri Ravi Shankar or a Sadguru Jaggi Vasudev.

Second, his forays into FMCG came after he went into ayurvedic medicines, which have huge credibility in India, and where a yoga guru’s endorsement matters. This allowed his yoga followers and ayurveda users to sample his FMCG products through a simple extension of existing brand preferences.

Third, by becoming the brand himself – like Richard Branson of the Virgin Group – he used word-of-mouth to build brand salience in a critical mass of consumers in the initial stages of launch. It is only now that Patanjali is advertising in mass media in a big way. His advertising costs were thus much lower than those of his rivals till recently.

Fourth, Baba Ramdev is positioned in the mass market, while Sri Sri Ravi Shankar, who is also into selling ayurvedic products, organic products and increasingly FMCG goods, is planning to expand into the upper reaches of the market with his Sri Sri brands. The group recently rebranded its products as Sri Sri Tattva, as opposed to the earlier Sri Sri Ayurved. It sells its ayurvedic and other products from www.sattvastore.com, and is in the process of expanding retail distributors to over 2,500 this year, Mint reported some time ago. P V Sindhu, badminton silver medallist at the last Olympics, will be brand ambassador for some of Sri Sri’s products.

Both Baba Ramdev and Sri Sri are taking Hinduism Lite into a new revenue model that augurs well for both spirituality and business. Yoga and spirituality need to be underpinned by sound finances; business sans spirituality is just a business.

India’s secular left outrage brigade will be after them, but they should stick to their guns.