Enter Qatar: India Is Losing The Aviation And Airports War To Gulf-Based Carriers 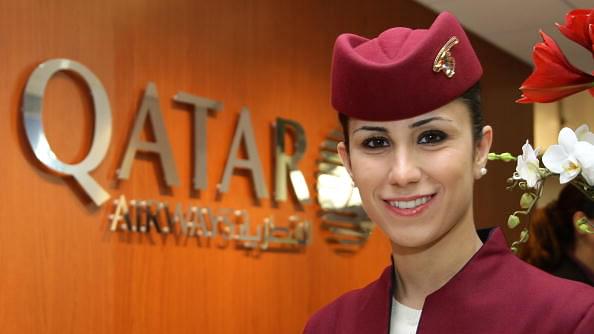 An air hostess of Qatar Airways at the International Tourism Fair. (Andreas Rentz/GettyImages)

A proposal from Qatar Airways to start a 100 per cent-owned domestic airline in India is likely to prove contentious, not least due to opposition from domestic players like Indigo and Jet, who claim the field is tilted against them. Among other things, the Federation of Indian Airlines (FIA) is likely to cry foul over three issues: one, that Qatar does not give Indian carriers the right to start a domestic airline in that country; that no country allows 100 per cent foreign ownership in a domestic airline, and, three, that this will shift international traffic to a hub in West Asia, and out of India. After Etihad Airways and Emirates Airlines, who have created hubs for international traffic from India in Abu Dhabi and Dubai, Qatar will create another hub in its capital Doha. Jet Airways survives because it plays feeder airline to Etihad in Abu Dhabi after being rescued from near-death by the latter.

Most of these arguments are protectionist. For example, what growth will Indian carriers get by operating in Doha, which does not have a huge domestic market worth speaking about? Secondly, how does India gain by not allowing 100 per cent foreign ownership? Wasn’t this the exact ownership limitation that drowned Kingfisher Airlines? Under current rules, a foreign airline can own 49 per cent directly, and foreign non-airline interests the balance. Qatar’s domestic Indian operations will be 100 per cent foreign-owned through the subterfuge, but then most Indian airlines too have NRI or foreign ownership whose ultimate ownership is often shrouded in mystery. The third point – that the hub will move out of India – holds some water, but for that we have ourselves to blame not the Qataris.

The global passenger hub is moving out of India not because Gulf-based carriers are deliberately favoured by Indian policies, but because we have not got our overall policy mix right. We charge huge premia for both fuel and airport infrastructure, while the UAE-based carriers benefit from their competitive advantage in both these areas.

To win in aviation, you need huge investments in airport infrastructure, so that airlines can be attracted to land here and create hubs. The airline business is a thin-margin one, and to succeed in it, you need to focus on lowering your costs on all fronts. This is precisely what our policies fail to do.

The mantra for success involves getting costs down in six areas: the key costs are CASK – or cost per available seat kilometre, which is the basic cost of offering one seat for a given distance in km. Then there is the cost of debt, fuel, maintenance, total flying time, and airport landing and parking costs.

While fuel costs are the same for every airline in India, actual costs vary from airline to airline depending on the age of the fleet. A younger fleet means more fuel efficiency and lower costs if you have got the maximum bums on seats. This is one reason why Indigo is champ in fuel efficiency.

Debt is trickier. Air India was killed by debt, much of it the result of Praful Patel’s wayward leadership when he was UPA Civil Aviation Minister. He forced Air India and Indian Airlines to merge, and then pressured them to buy so many airplanes on loans that it sank the airline. Debt can be optimised by evolving a good mix of owned and leased aircraft. Too many owned airlines may mean excess debt, but also lower long-term running costs; leased aircraft lower debts, but running costs can be higher. The mix depends on an understanding of the market, and the likely fares you can charge. The Gulf carriers have a natural advantage in deciding this mix since they have petro-dollars in plenty to either buy or lease. The Indian carriers depend on cash flows to make this decision, and their capital bases also tend to be stretched.

What all this translates to is a definite advantage for Gulf-based carriers, who get cheaper fuel, better airport infrastructure, and enough capital at lower costs to run both airlines and airport profitably.

The UPA years ruined India’s advantages on these front.

For example, when the Delhi and Mumbai airports were privatised, the bids went so high that GMR (which won Delhi) offered a revenue share of 46 per cent and GVK (which won Mumbai) 38.7 per cent. This means 46 per cent and 38.7 per cent of the topline went straight to the Airports Authority of India before taking costs into account. Not surprisingly, airport landing and parking charges had to be hiked steeply over the last 10 years to make the operations viable.

Secondly, the UPA-era land acquisition law has made land one of the most expensive ingredients in airport building and expansion. The Navi Mumbai airport, which was won by GVK, will now cost upwards of Rs 16,000 crore, most of it due to land acquisition costs. It needs no imagination to assume that new airports and expansion of existing non-metro airports will be costly. In contrast, consider how easy it is for airport authorities in the West Asian deserts to acquire land.

As long as our airport and airline cost structures are out of whack with what is prevalent in the Gulf, it is West Asian carriers which will hold the high cards in Indian aviation.

Our policies need to address all cost issues before we can leverage our high traffic growth potential and locational advantages to make India itself a hub for global carriers between East Asia, Africa and Europe.

Keeping Qatar Airways out with protectionist rhetoric will only retard our growth, for aviation generates huge economic spinoffs, creating jobs in airlines, airport infrastructure, supply chains, cargo hubs, and tourism, among other things.

If we had good negotiating skills, what we should be doing is handing over 49 per cent of Air India and management control (minus the brand name and some debts) to Qatar, and let them run it profitably.

We need an integrated aviation and airport policy to challenge the hubbing advantages of Gulf-based carriers.