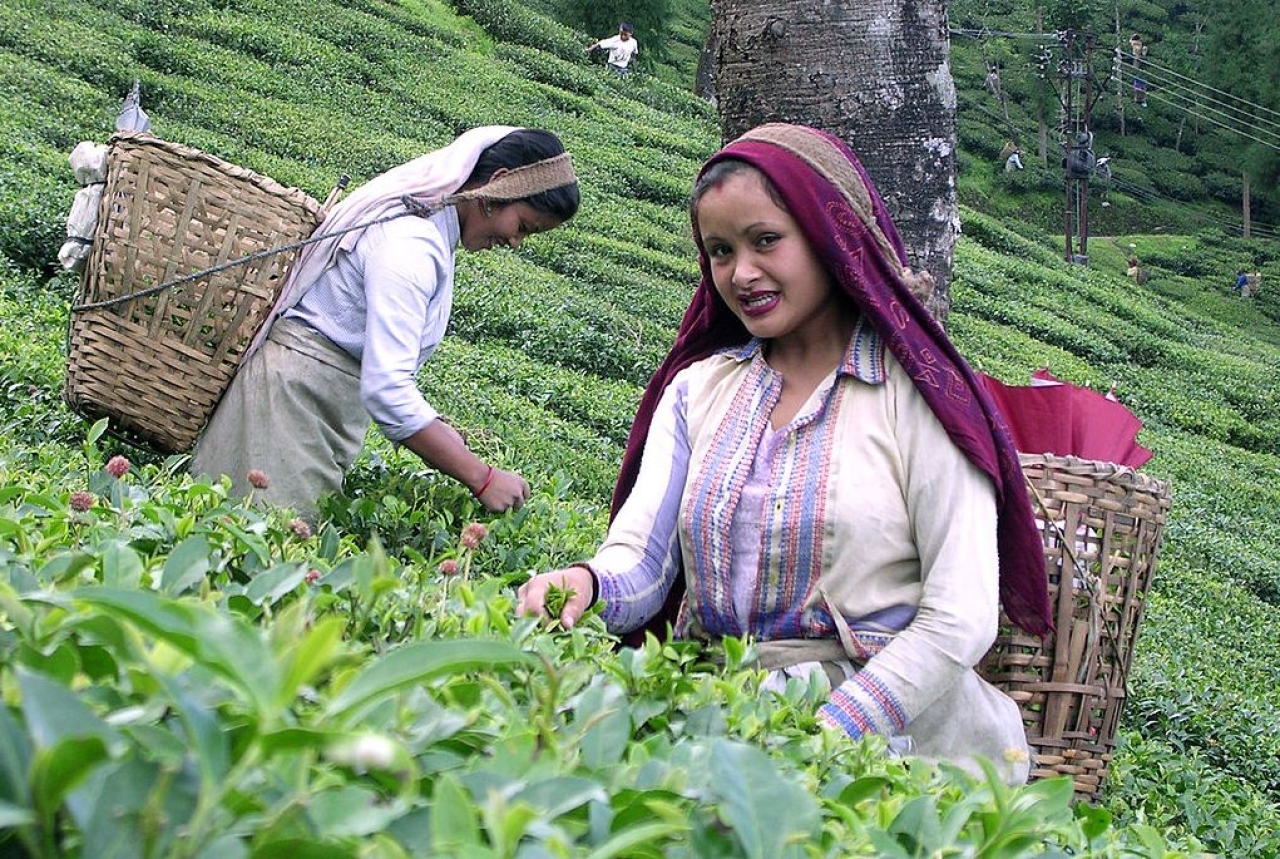 A tea garden in Darjeeling  (Benoy/Wikipedia)

In 1961, India had a 37.18 per cent share in the global tea market. It has dropped to around 12 per cent now. India exports tea in the form of bulk, instant, packet, and tea bags.

At the same time, Kenya, currently the world’s largest black tea exporter, has nearly quadrupled its exports, from around 120 mkg to 474 mkg last year.

Exports from neighbouring Sri Lanka, the first country to top India as the leading black tea exporter way back in 1965, have nearly doubled to 282.3 mkg from around 150 mkg during the same period.

India is the largest black tea producer in the world and its production has increased to 1.33 billion kg with more areas coming under tea cultivation and with higher yields. Kenya’s production was 492 mkg last year, while Sri Lanka produced 304 mkg.

Compared to other countries, India’s productivity is higher at over 2,250 kg per hectare. So the question arises as to why India is trailing Kenya and Sri Lanka in tea exports despite producing nearly double of what both countries produce together.

China is the third largest exporter. But we are not taking it into consideration since it exports green tea compared to black tea by India, Kenya and Sri Lanka.

India had done well on the export front until the disintegration of the Soviet Union in 1991. Until then, the erstwhile United Soviet Socialist Republic (USSR) was its major buyer. It helped Indian exports to rise to 241 mkg in 1981 before it began slipping slowly.

In 1992, India’s tea exports slipped below 200 mkg for the first time in 12 years. It took another six years before tea exports could top the 200 mkg-mark again. Since then, tea exports have been zig-zagging, though they have topped 250 mkg in the last couple of years.

A major reason for exports topping 250 mkg is an increase in global tea consumption.

However, compared to Kenya and Sri Lanka, India’s tea export growth has been slow. India’s problem has been its dependence on the Soviet bloc until 1991 and it took time to look at other options.

In looking at other options, India chose to concentrate on Islamic countries such as Iran, Iraq and other Gulf countries. India’s objective to look at these markets was to tap the huge market there since liquor consumption is banned and drinking tea is popular.

Towards this objective, the oil-for-food deal with Iraq came in handy for India to push its tea into Teheran — apart from Basmati rice and pharmaceuticals.

Despite ruling lower than Kenyan and Sri Lankan teas, India has not been able to take advantage of the price factor in the global market as its promotional efforts have been traditionally weak.

Sri Lanka has always been aggressive in marketing its teas and has succeeded in making its tea the official drink at major international sports events, including the Olympics.

Kenya has been selling its tea by marketing its unique propositions such as its estates not using pesticides or agrochemicals. Additionally, its tea is blended with other teas, such as those from India, and sold by multinational firms as their own blends.

Kenya and Sri Lanka have also been coming up with measures such as repositioning and tapping market intermediaries. And apart from all this, Kenyan and Sri Lankan teas have better taste profiles compared to some of the Indian teas, according to experts.

There is no getting away from saying that Indian efforts with regard to promoting tea exports have been slack.

Nearly 65 per cent of the Indian population drinks tea. It is one of the commodities that is inelastic since an increase in prices doesn’t affect consumption. India’s tea consumption is rising at the rate of three per cent annually.

Rising domestic consumption may be a dampener in promoting exports but there are other reasons too for a slack export promotional effort.

Compared to other sectors, the Indian tea industry costs are higher in view of the increase in wages and welfare measures, which include providing ration and housing. However, wages in Assam and Bengal are lower by two-thirds of the pay that workers get in South India.

The Indian tea industry is protected by the imposition of a 100 per cent customs duty on imports of the beverage plus four per cent countervailing duty. This works as a cushion from real competition from other imported teas in the domestic tea market.

In contrast to the Indian situation, Kenya and Sri Lanka have poor domestic consumption and hence have been pushed to a situation where they must export their produce. For example, Kenya exported nearly 475 mkg of tea in 2018 out of a total 492 mkg that it produced. Sri Lanka shipped 271 mkg out of the 304 mkg it produced.

Due to these reasons, Kenya and Sri Lanka are very aggressive in the export market compared to India. With India preferring to let market forces play their role in the global tea market, it will likely continue to play a passive role compared to the aggressive roles that Sri Lanka and Kenya play.

However, the Indian tea sector can be woken up from its deep slumber if the centre moves in to lower the protection it offers through higher customs duty for importing tea. Not only will such a move make the sector more active, it will also ensure better quality tea for the Indian consumer.

Get Swarajya in your inbox everyday. Subscribe here.
Tags:
146 Shares