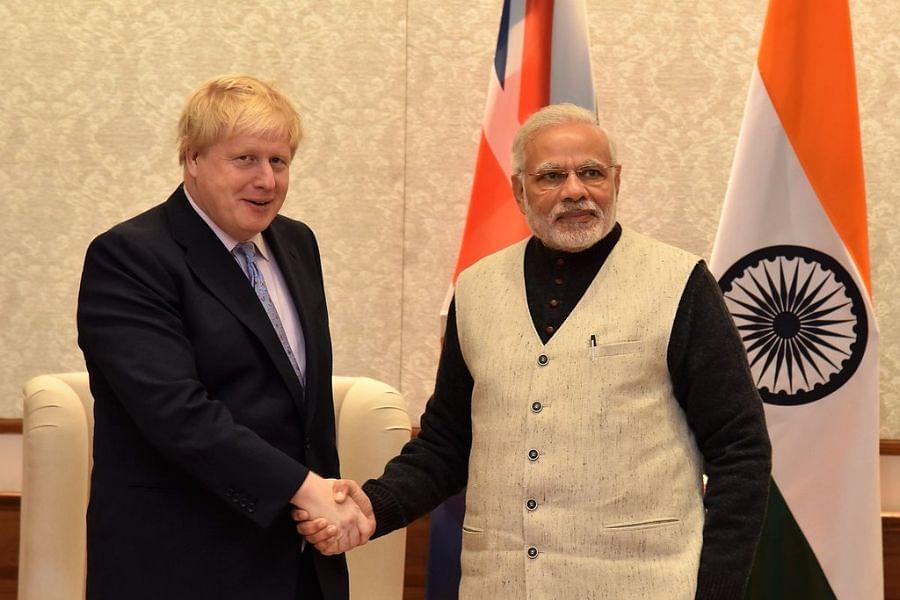 India and the UK on Friday (22 April) added a strong value proposition to the Comprehensive Strategic Partnership between the two countries with the establishment of a strategic tech dialogue towards supporting India’s start-ups and MSME sector in exploring new markets and globalising innovations along with the UK’s support for a "self-reliant India" in all sectors of manufacturing, technology, design and development in the defence sector.

These new layers of engagement signal the intensification of bilateral engagements since the virtual summit which both sides welcomed during delegation level talks between Prime Minister Narendra Modi and his British counterpart Boris Johnson on 22 April 2022.

The visit of Prime Minister Johnson in a significant year when India is commemorating the seventy-fifth anniversary of its Independence and the two countries are marking 75 years of bilateral ties, while being historic in itself, is also opportunely aligned with the extensive reforms going on in India, infrastructure modernisation plan and the National Infrastructure Pipeline as well as the increasing investment in India by UK companies and positive contribution by 1.6 million people of Indian origin living in the UK to every sector of the society and economy which set the stage for a more robust mutual intent to deepen the strategic partnership.

As per a CII-Grant Thornton report 2020, there are 850 Indian companies operating in the UK, with combined revenues of almost £41.2 billion. The UK is the sixth largest inward investor in India with a cumulative equity investment of $28.39 billion (April 2000 - June 2020), accounting for around 6 per cent of all FDI into India.

Building on this chemistry significantly is the intent of the two sides to target the conclusion of the majority of talks on a comprehensive and balanced Free Trade Agreement by the end of October 2022, according to the Joint Statement issued by the Ministry of External Affairs.

The FTA, negotiations for which were launched in January 2022 in New Delhi, has seen some progress in two rounds of the talks so far and is expected to see further movement in the third round of meetings next week between the negotiating teams.

An FTA between the fifth and sixth largest economies of the world is expected to boost economic growth, create new jobs in both countries and double bilateral trade by 2030. The case for sealing a deal has gained currency on the back of successful conclusion of FTAs with the UAE and Australia recently, the strong resilience shown by economies of India and the UK and the positive growth in bilateral trade showcasing the potential to double trade by 2030, as envisaged in the Roadmap 2030.

However, an early resolution of all pending market access issues in a balanced manner -- as both sides have voted for -- is needed to get the deal done. The two sides are looking forward to finalising the mutual recognition of qualifications and a framework for nursing staff and continued cooperation on outstanding areas related to social security arrangements and legal services which will be critical in building the framework of trade in services as part of the FTA.

What would complement the FTA is the shared objective of deepening India-UK cooperation at the World Trade Organisation on mutual goals and sustained engagement through the India-UK Multilateral Trade Dialogue and other mechanisms.

A solid groundwork for an investment deal in the FTA is offered by the increasing investment flows between the two nations. According to industry sources, increasing investment flows between the two nations, progress made in the eleventh Economic and Financial Dialogue (EFD) and the intent to further cooperation through the EFD including intensifying cooperation in financial services, banking, insurance, fintech, green bonds, sustainable finance and capital market sectors and to promote collaboration between regulators and stakeholders.

The JCB Plant at the Mhaswad Industrial area in Vadodara is one of the most recent investments by the UK in India and is seen as a considerable one in the area of earthmoving equipment with tremendous export potentialities. Prime Minister Johnson spoke about the fact that it would produce a number of units that could be also exported to as many as 110 countries.

Adding substance to the India-UK ties is the conclusion of the implementation arrangements of global innovation partnership under which India and the UK will co-finance up to $100 million for transfer and scaling-up of "Made in India" innovations to third countries.

The India-UK GIP in the field of trilateral development cooperation is an important initiative which will further strengthen the India-UK bilateral development partnership with other countries. Under this India and UK will co-finance up to $100 million over 14 years to support the transfer and scale up of climate-smart inclusive innovations from India to third countries in Asia, Africa and the Indo-Pacific, accelerate the delivery of the Sustainable Development Goals and tackle climate change in line with the resolutions taken at COP-26 held in Glasgow.

The UK also has a commitment to the tune of $1 billion investment through British International Investment -- its development finance institution -- into climate related projects in India over the period of 2022-2026.

Modi has also welcomed the UK’s guarantee for $1 billion World Bank lending to support India to develop green infrastructure and invited UK to be part of the Green Hydrogen Mission.

India and the UK are also poised well to transform defence and security cooperation as a key pillar of the strategic partnership towards creating a free, open and secure Indo-Pacific as well as supporting India’s mission of self-reliance.

With both Modi and Johnson noting the importance of robust defence industrial collaboration for manufacturing of defence equipment, systems, spare parts, components, aggregates and other related products and key capabilities under the Make-in-India programme, the doors have opened wider to co-development, indigenisation, transfer of technology and setting up of joint ventures for meeting India’s Defence needs.

The UK’s announcement of an ‘open general export license’ to facilitate technology engagement with India, the open opportunity for India to participate in the UK’s aviation and naval shipbuilding programmes and agreement to work bilaterally and with key partner countries to facilitate highest level access to technology to Indian industry are important steps in recognising India’s interests.

Going ahead, the two countries will move on, as mandated by the two leaders, to identify high-impact projects for time-bound implementation in each of the pillars of the Roadmap and steer the bilateral relations toward a Vision 2047 for shared security and prosperity of their people and the planet.

Also Read: Karnataka And Uttar Pradesh At The Forefront Of Growth – The Pandemic Effect