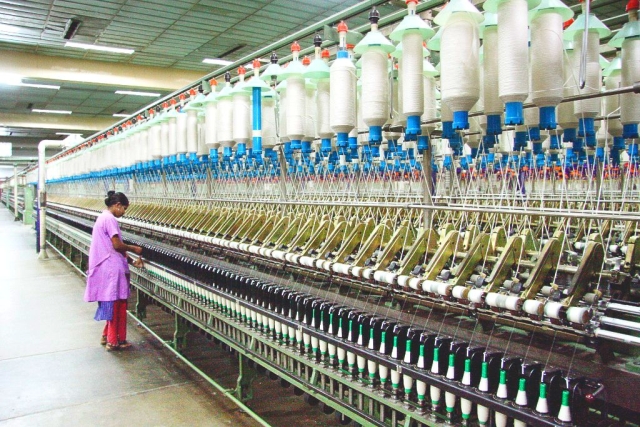 A representative image of a textile factory.

The Indian textiles industry, valued around $150 billion, requires the Union Government to meet five of its primary demands to make good of the opportunity that is arising due to the anti-Chinese sentiments in the global community post-Coronavirus.

If the Government can help in meeting these five demands, the industry, whose exports have been hovering a tad below $40 billion, hopes to double textile products shipments from the country and filling the void that China has been creating in the global market over the last few years.

The first demand of the industry is with regard to funding by banks.

“Banks have not been helpful to the industry, be it in the current situation or other ones,” said K Selvaraju, Secretary-General, Southern India Mills Association (SIMA). The association is the representative body of the entire link chain of the textile industry in the south.

“For example, the Reserve Bank of India (RBI) announced a package for the industry on 27 March but banks have not decided on it still. Their credit rating of industrial units is ad hoc. The interest rate cut is yet to be passed on to the industry. We are still paying a high interest of 11-12 per cent,” said Selvaraju.

Banks are trying to play safe with regard to their clients. They should not be looking only at corporates, particularly with regard to the textile industry, where many small and large family holdings have good track records, said industry experts.

In the current crisis created by Coronavirus situation, the RBI should consider providing a two-year moratorium for funds provided to the industry, said Selvaraju, pointing out to the Government’s action during the 2008-09 financial crisis.

Then, the Centre came up with a stimulus package offering 12 per cent export incentive and three per cent interest subvention. The industry would need a better package now what with some of them facing problems of cash flow, said experts.

“The RBI should tell the Indian Banks Association to ensure that all its members implement a uniform policy. Any banks defaulting on implementing the policies uniformly should be black-listed. Banks have to hand-hold the industry to tide over the crisis,” said the SIMA official.

“Right now, the Government will have to help the industry tide over the fund crunch, asking the banks to raise our credit limits,” said A Sakthivel, Chairman, Apparel Export Promotion Council (APEC).

Sakthivel said this is necessary right now as many units in the industry lack cash flow, have outstanding receivables and require to pay their suppliers.

“Funding to the textiles industry at a lower interest rate is a must,” said Anand Popat, a Gujarat-based raw cotton and cotton yarn trader.

The industry’s second demand is the need for improvement in the country’s export and import policies. “Incentives for textiles exports should continue,” said Popat.

“India should focus on taking over the markets that the Chinese are vacating. Trends show that such a thing is not happening. Even under free-trade agreements, like the one we have with Japan, our garment exports are not showing any significant rise. We have look for better options through policies,” said D K Nair, an industry expert who had served the Indian Cotton Mills Federation (now, Confederation of Indian Textiles Industry (CITI)) during the 2000s.

“There are other issues. Today, a garment maker doing a contract job for a foreign company is left waiting for over a month to get the fabric sent by the company to his/her factory gate. Export policies should try and address these issues,” said Nair.

Industry experts said that India will have to revisit various free trade agreements (FTA) it has signed since irregularities are being committed under the pacts.

“Bangladesh uses its FTA with us to push its products made of Chinese imported materials. We must have provisions for protecting our industries. We cannot become a dumping ground for Chinese products,” said SIMA’s Selvaraju.

In the case of textiles, the FTA can specify that special access or privileges for textile products made in Bangladesh would be extended only if its producers import yarn and fabric from India, experts argue.

The export and import policies should be framed to provide a level-playing ground for the industry, particularly textiles. For example, a higher duty is imposed import of raw materials to produce synthetic textiles.

“Duty on synthetic raw materials will have to be lowered to ensure the textile industry gets a level-playing field,” said the SIMA official.

Third, the textiles industry wants labour laws to be amended to help it function smoothly.

Industry experts said that the industry is labour-intensive and relies heavily on migrant workers.

“Our labour laws have to be changed to ensure that our productivity increases at par with countries such as Bangladesh and China,” said Nair.

Lower productivity is a bane of the sector, which is unable to speed up its product delivery. “The turnaround time for the Indian textiles industry is longer. It has to be made short to become competitive in the export market,” said Nair.

“It takes at least three months to train an employee on his job in the industry. It is not easy to dismiss an employee. But the industry would need some protection against trade unionism, which is affecting production and productivity,” said an expert, not wishing to be identified.

Fourth, the industry wants the definition for Micro, Small and Medium enterprises (MSME), which form the backbone of the textiles industry, changed.

“A bill was introduced in Parliament last year to change the definition of MSMEs. It is still pending and we hope it will be passed soon,” said Selvaraju.

The Bill on MSMEs got held up due to Parliament’s functioning being affected by Opposition parties’ protests for one reason or the other. The bill is being opposed by some MSMEs themselves. The Swadeshi Jagran Manch, an economic wing of the Rashtriya Swayamsevak Sangh, has also opposed the classification of units based on their turnovers.

The amendment proposes to allow units to invest without any limit in modernising their plants and fearing being denied incentives for their efforts. Industry experts said Textiles Minister Smriti Irani is trying her best to explain to the Centre why the bill should be taken up urgently.

The fifth demand of the industry is to speed up and implement the Textile Ministry’s special fund for the sector. This fund will likely be part of the New Textiles Policy 2020.

SIMA’s Selvaraju said the fund would ensure that the Ministry would provide credit guarantee to banks for the funds the units avail. It would help in expanding their capacity and extend the tenure of credit repayment.

In the Budget for the current fiscal, Finance Minister Nirmala Sitharaman proposed a National Technical Textiles Mission from 2020-21 to 2023-24 with an estimated outlay of Rs 1,480 crore.

The Textile Ministry, according to industry experts, is taking several initiatives, including an Amended Technology Upgradation Fund Scheme that can create employment for 3.5 million people, besides enabling Rs 95,000 crore investments by 2022.

The Cabinet has cleared a new skill development scheme for capacity building in the textile sector with an outlay of Rs 1,300 crore. In turn, the Textiles Ministry has signed an agreement with the States for skill development in the sector.

Besides, the Centre would have to consider various pleas made by representative organisations such as CITI, APEC, SIMA, Cotton Textiles Export Promotion Council and Indian Textiles Accessories and Machinery Manufacturers’ Association, said Nair.

The Textiles Industry sees not just good prospects in the export market but also in the domestic market with expanding income and people spending more on clothing.

(This the fifth and last in a series of articles on the textiles industry post-Coronavirus. The earlier articles appeared on 29 April, 1 May, 4 May and 6 May.)