Jio: Mukesh Ambani Made The Biggest Bet Ever By Any Indian Businessman And It Looks Set To Pay Off 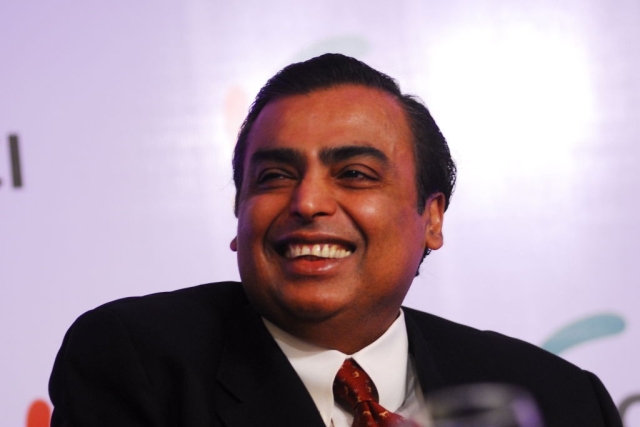 Mukesh Ambani at a meeting in Mumbai. (Pradeep Gaur/Mint via Getty Images)

Less than two years after the launch of Reliance Jio, the biggest bet ever made by Mukesh Ambani, or, for that matter, any private Indian businessman, may be about to pay off. In September 2016, when he launched his mobile broadband services at cut-throat rates, it seemed like he had bet the farm to take on entrenched market leaders like Airtel, Vodafone and Idea Cellular.

While risks remain high, Reliance Industries’ Q1 results – announced on 27 July – showed that Jio continues to make slim net profits of Rs 612 crore despite a sharp fall in average revenues per user (ARPU) to Rs 134 (from around Rs 154 some quarters ago). It is making up in volumes what it is losing in value.

As at the end of June, Jio reported a subscriber base of 215 million users, which makes it No 3 after Bharti Airtel and Vodafone, with 344 million and 222 million users respectively. While the Vodafone-Idea merger will change the rankings once more, Jio is now an unshakeable No 3, and snapping at the heels of the top two.

In May – the latest month for which we have full subscriber data from Telecom Regulatory Authority of India, the industry’s net gain of 5.93 million subscribers was overshadowed by Jio’s 9.35 million. This suggests that Jio is gaining at the cost of some of the others. Barring Airtel, growth has essentially flattened out or reduced for the rest.

Jio’s biggest impact has been on the revenues and profits for its main competitors: in the first quarter of 2018-19, all the three – Airtel, Vodafone and Idea – reported a drop in revenues and profits. Vodafone’s revenues dropped 31 per cent during the quarter, while Airtel’s profits dropped 74 per cent. Idea reported a profit only because of an extraordinary income from the sale of its tower business to ATC Telecom. Exclude this, and the loss before tax and exceptional items is a staggering Rs 2,758 crore.

A Mint report suggests that Jio’s share of the mobile broadband market is now equal to or greater than that of the rest of the industry put together, even though its revenue market share is just 23 per cent.

Since Jio is not planning to stay put at No 3, three things are now clear:

One, the industry will continue to bleed for several more quarters, if not years, as Jio continues its relentless drive for revenue market share. And since the battle is for broadband, the incumbents have to invest even more to retain customers.

Two, while both Airtel and Vodafone-Idea may try to hold on to tariffs by allowing for some loss of market share, this strategy has its downside as Jio will gain on them.

Three, gaining subscribers will be tougher for all players in future as it is now a zero-sum game. Gain for one means loss for another. The gains made by many players in recent months came from cannibalising the existing customer bases of those exiting the industry, including Reliance Communications, Telenor, Aircel and Tata Teleservices. Most of the customers of these companies have either already migrated to the ‘Big Three’ or to government-owned BSNL. (Telenor has merged with Airtel while Aircel has filed for bankruptcy; Tata Tele is to be taken over by Airtel, while Reliance Communications is to be taken over by Jio).

Four, real growth is subscribers will only come from rural areas, and in May over 80 per cent of the net additions came from this segment. This shift means new subscribers will pull down ARPUs even further.

This dramatic shift in the Indian telecom industry has obviously been the result of Jio’s tumultuous entry.

The question is how has Jio been able to put in the kind of investments that has knocked the bottom out of its rivals’ profits?

Two answers here: one is obviously high profits from oil refining and petrochemicals; but the other is clearly debt. From being a nearly debt-free company some years ago, as at the end of June 2018 Reliance had massive debts of Rs 242,116 crore, most of it due to investments in Jio infrastructure. But it has probably been smart here: as a net exporter, it has raised a substantial chunk of its debt abroad at lower interest rates. The export of petroleum goods provides it a hedge against foreign exchange risks, making this debt cheap even when the rupee depreciates.