Kerala: How A CPI(M) Linked Trade Union Has  Made Operations Difficult For This Finance Firm 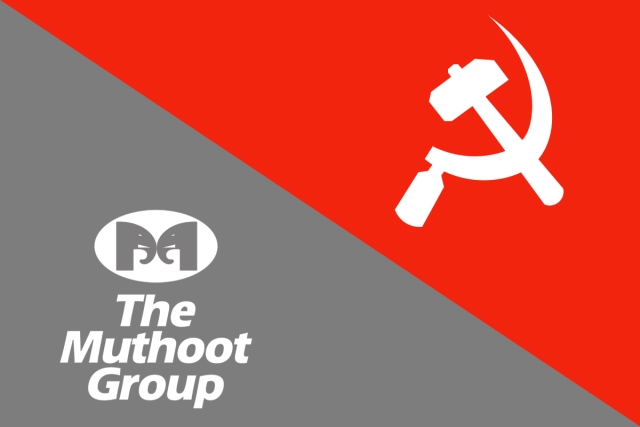 Earlier this month, Kerala-based financial services company, Muthoot Finance, reported a nine per cent rise in its consolidated profit for the first quarter of the current financial year.

But in an internal message to its employees on Wednesday (28 August), the firm’s Managing Director, George Alexander Muthoot, said the company would be forced to shut some of its branches in Kerala, which are not operational now, from 2 September.

Rumours in some media say the company is planning to leave Kerala totally.

Now, why has Muthoot Finance — a leading firm in offering loans against gold — sent this internal note to its employees? The financial services company is the latest victim of trade unionism in Kerala.

Muthoot Finance has 3,000 employees on its rolls. At least 450 of them owe allegiance to the Non-Banking and Private Finance Employees Association (NBPFEA). This association is affiliated to the Centre for Indian Trade Unions (CITU), the workers arm of the Communist Party of India (Marxist) (CPI(M)).

These 450 employees have been striking work for almost a week now, demanding revision of wages. As a result, the functioning of some of Muthoot Finance’s branches has been affected. Business operations at these branches have come to a standstill, forcing Muthoot Finance to warn its employees.

George Alexander Muthoot is very clear in his message to his employees. He has ruled out merging the branches that will be shut with other ones. He has said that those employees who would be displaced due to the closure of branches would not be redeployed.

According to the note, Muthoot Finance has been affected by frequent strikes at these branches, which has caused problems to its customers. This has also resulted in loss of business to its rivals.

Deccan Chronicle quoted a company spokesman in Kochi as saying that the frequent strikes had affected the functioning of the branches for several days.

Muthoot Finance, in an announcement to Bombay and National Stock Exchanges, said that NBPFEA had declared an indefinite strike from 20 August. It said that although a large number of its employees were not part of the strike, they were unable to open the branch offices.

Some of its staff were threatened and assaulted, resulting in the closure of the branches. The company said that 265 of its 623 branches were open today (Thursday), while only 224 were open on Wednesday.

Muthoot Finance has over 4,500 branches across the country with 623 of them functioning in Kerala. Reports peg the number of branches affected by the NBPFEA strike between 300 and 450. Most of the employees, especially women, are opposed to the strike.

In a video circulating on social media, a woman can be seen telling a CITU leader that she earned Rs 3,000 as monthly salary when she had joined the company but she was getting Rs 18,000 now. The woman said that CITU has had no role to play in her salary hike.

The CITU leader responds to the women saying that some of the sub-staff were earning Rs 400 a day, which was inadequate to meet daily expenses for a family.

Kerala CITU General Secretary, Elamaram Kareem has, in a statement, said that 300 Muthoot Finance branches have been shut in Kerala and his organisation was willing to hold talks with the company management.

Kareem has also sought clarification from Muthoot on the salaries and benefits paid to the employees since they joined its rolls.

Critics of CITU slam the inaction of the CPI(M) government in Kerala for Muthoot Finance’s problem. Muthoot Finance has played a key role in offering loans against gold and even giving higher interest rates for savings deposits, the critics point out.

Last year, Synthite Industries, one of the world’s largest spice extraction firms, threatened to shift its base from Kerala following problems created by CITU. Synthite had been functioning from Kerala since 1972.

In view of the developments, shares of Muthoot Finance were quoted at Rs 614.10 on Thursday, rallying after having dropped to Rs 601 at the opening of trade. On Wednesday, the shares had ended at Rs 622.95.