Middle Class Shock: Good Quality Jobs Are Vanishing in IT, Finance And Telecom 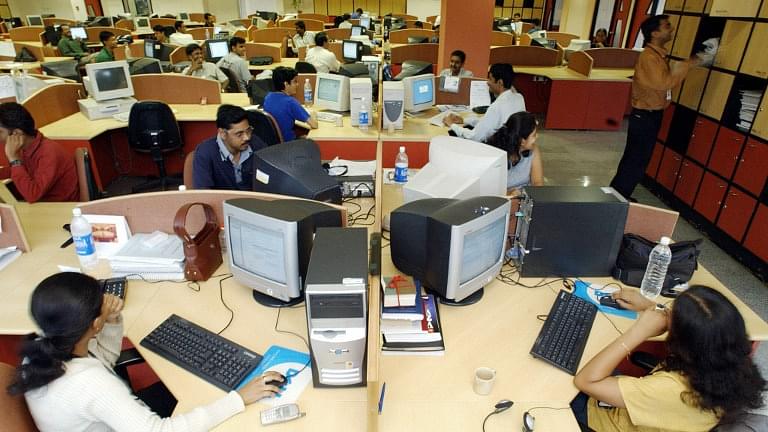 The ‘giant sucking sound’ you heard was the sudden disappearance of a large chunk of jobs in India’s most sought-after sector: software services. Whether it is Infosys, Tata Consultancy Services, Cognizant, Tech Mahindra or Capgemini, thanks to weak demand in North America, increasing automation of lower-skilled jobs, and pressures for more local recruitment, pink slips are being handed down and future hiring plans are being cut to the bone.

Yesterday (10 May) Tech Mahindra indicated that it may lay off upto 1,500 employees. Earlier, Cognizant Technologies was planning to bid goodbye to 6,000 based on performance. Infosys is cutting 1,000 jobs at the level of project managers and architects. Wipro has shown the door to around 350-400 employees, and has hinted that more may go if business does not pick up. The buzz is that Capgemini may axe as many as 9,000 jobs – though the company has denied this number.

Fresh hirings may be down by more than 40 per cent from previous levels, as software companies go slow to squeeze more out of their existing idle bench strength.

One is the shift in demand from plain-vanilla software maintenance and related services to SMAC – short for social media, mobile technology, artificial intelligence and cloud computing. Indian software services, with its emphasis on using cheap engineering skills, cannot any more create jobs only due to the cost arbitrage advantage. It must move up the skills ladder, as lower-skills jobs can now easily be automated. Skills are in demand in SMAC, and not in the old areas where India dominated. This means not only will the IT industry recruit less, but even this lower numbers will be heavily tilted towards high skillsets in SMAC.

Two, there is a huge bulge at the middle of the software services sector. Those who cut their teeth in coding some 10-15 years ago are now in middle management, but the cost structure of IT companies needs them to replace higher-cost older employees with less important skills with cheaper new intake. This is where most of the jobs are now being lost.

Three, India’s biggest market – in North America – is turning protectionist, and H1B visas, will not only be costlier, but may also carry higher minimum wage barriers that deny Indian engineers their cost advantage. This means recruiting in America may be as competitive as hiring from Indian engineering colleges. Infosys, to keep the protectionist Trump administration happy and to increase its skills, is planning to hire 10,000 employees in the US over the next couple of years. In the last two quarters, its net hiring in India was practically zero.

However, the impending diminution of high-quality jobs is not going to be restricted to IT services alone. While IT services are expected to lose over six lakh low-skilled jobs due to automation by 2021, two other sectors – banking and telecom, both in the throes of consolidation due to competition and slimming margins – are also likely to shed jobs. One report puts jobs losses in IT, banking and financial services, and telecom at nearly 1.5 million over the next couple of years.

Banking is changing due to technology. With the advent of the smartphone and e-banking, banks no longer need too many physical branches or even ATMs and credit cards. Kotak Mahindra, for example, has launched an 811 account where you can open an account through an app in five minutes, if you can quote your Aadhaar number and Pan. This app hosts your debit card and enables e-payments to almost anybody.

As for telecom, with the entry of Reliance’s Jio, a fully-internet protocol-based mobile service, voice calls have become free and data costs are crashing. This has forced a consolidation in the industry, with Airtel buying out Telenor, Reliance Communications merging with Sistema and Aircel, and Vodafone merging with Idea Cellular. Mergers invariably mean more shared services and shedding of jobs in the merged entity.

But the biggest threat to white collar jobs is, by far, automation, with robots taking over factories and even service jobs that are routine.

A Mint story quotes the International Labour Organisation (ILO) study to suggest that Asia may lose 137 million jobs to robots over the next 20 years, and the US itself may lose five million jobs to automation by 2020.

One sign of the times was Adidas’s decision to move a factory to Atlanta in the US. Shoe-making had fled high-cost US and Germany decades ago, but with robots now capable of making standard-sized shoes, Adidas is building robot-driven factories in both Germany and the US.

Put another way, manufacturing is making a comeback in high-cost advanced nation, but it will be creating even fewer jobs than before.

This trend is being accentuated by the world’s huge surpluses in capital. According to one report, US corporations held more than $2.6 trillion in untaxed cash offshore. With companies like Apple and Google holding hoards of cash, they are investing even more in cutting-edge technologies like driverless cars and other types of automation that will eat further into jobs.

This is not to say that jobs will not be created, but they will be created more downstream, in sales, servicing and consumer tracking. Meanwhile, manufacturing and services companies are hiring people on a contractual basis – jobs that offer low security of service and few long-term benefits.

What we are now facing is not necessarily the diminution of jobs, but the decimation of jobs that people would want for themselves.

Jobs quality is going to be the first victim, and the new jobs market will have a handful of people with high skills making money hand over fist, and a mass of people with uncertain and poor quality jobs.

This is what the jobs crisis will really be about.