WhatsApp, Google Will Take UPI Places, But These Godzillas Could Also Hijack The Glory 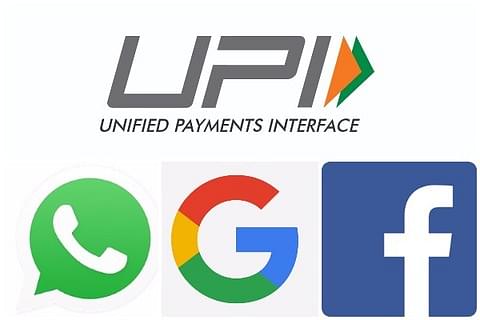 The announcement that WhatsApp, the world’s most popular messenger application, has been approved by the National Payments Corporation of India (NPCI) to partner with many banks for making payments using the Unified Payments Interface (UPI), is good news – and a cause for worry.

Google, Uber and Facebook are all in line to integrate UPI into their own payment apps, with Google awaiting a nod from the Reserve Bank of India (RBI) for using the interface to enable its Android Pay product. NPCI managing director is quoted by The Times of India as saying that “if players like Google and Facebook adopt UPI, this will push mass adoption of digital payments.”

It is certainly true that getting a global Godzilla to adopt your interface will take it places. As things stand, the UPI technology is used by 52 banks, and transactions worth Rs 3,067 crore were done using it last month (June). The Bhim app (Bharat Interface for Money), also built on the UPI, has 49 banks linked to it, and in June the transaction volumes were around Rs 1,486 crore.

These are not exactly exciting volumes for two major breakthroughs in mobile platform technology, especially given the context of demonetisation, when these interfaces and apps were pushed hard by the government. Even now, there are bonuses and rewards for adopting Bhim and its usage for payments.

Slow growth is the reason why the NPCI and government are keen to partner with the big tech powers of the world.

But one must strike a note of caution here.

If India wants to control the platform and its growth in this country, it should be doing more than just hanging on to the coat-tails of Google and WhatsApp.

A few months ago, for example, the government launched its own Aadhaar Pay, which enables mobile payments using biometric authentication. One wonders how this payments solution will fare if it now must compete with the Googles and Facebooks of the world, which already have users in this country running into millions.

If Google is going to use UPI to promote its own Android Pay, it is more than likely that the government’s own Aadhaar Pay and the Bhim app will be struggling to find traction. Quick adoption of digital payments using the global giants’ user base comes at the cost of losing control of your own platforms (both Aadhaar and UPI) to the former. You may control the technology, but Google and WhatsApp have the users.

To put it starkly, it is quite possible that Google and Facebook will “digest” the UPI interface, and, once they have got a foot in the door, they can easily replace UPI with their own interface to completely control the platform. After all, it is hardly anyone’s case that what NPCI can do, Google can’t do.

In the age of the platform, companies that have developed platforms do not allow others to take control of it. For example, Android is an open platform for mobile phones, but Google controls its development tightly, and mobile companies using Android can only develop further apps on this platform. The core technology belongs to Google. One hopes this is what NPCI is doing with UPI.

One also hopes that NPCI and the government will not allow UPI and Aadhaar to be “digested” by the T-Rexes of global tech. After all, once payments start flowing through WhatsApp and Android Pay, one can be sure these giants will seek direct partnerships minus UPI with banks. The interface will be replaced with their own solutions.

To really own a technology platform, you also need to own a lot of the consumers around it. It is worth noting that NPCI’s RuPay debit card took off only when the government expanded financial inclusion through Jan Dhan accounts, and used RuPay as the card of choice. RuPay gained because Mastercard and Visa were kept at arm’s length in the Jan Dhan business. RuPay now has a 43 per cent market share in terms of the number of cards issued, but its spends are only 18 per cent in point-of-sale transactions.

NPCI, as merely the technology developer, does not own the consumers around it. If it really wants to make the UPI ubiquitous in India, it needs to have a giant partner with a large customer base, so that its platform is widely used and continuously improved with customer feedback. Who is better for this job than State Bank of India?

Right now, the public sector and other banks prefer to peddle their own wallets and UPI-based apps and solutions because they have only an indirect ownership of UPI.

UPI can still be an open technology platform for banks to develop their apps around it, but someone with direct skin in the game needs to own it to push it hard with its customers. If NPCI is not to become an also-ran once the Googles get into the game, it needs a Godzilla of its own to partner.