Chef’s On The Table 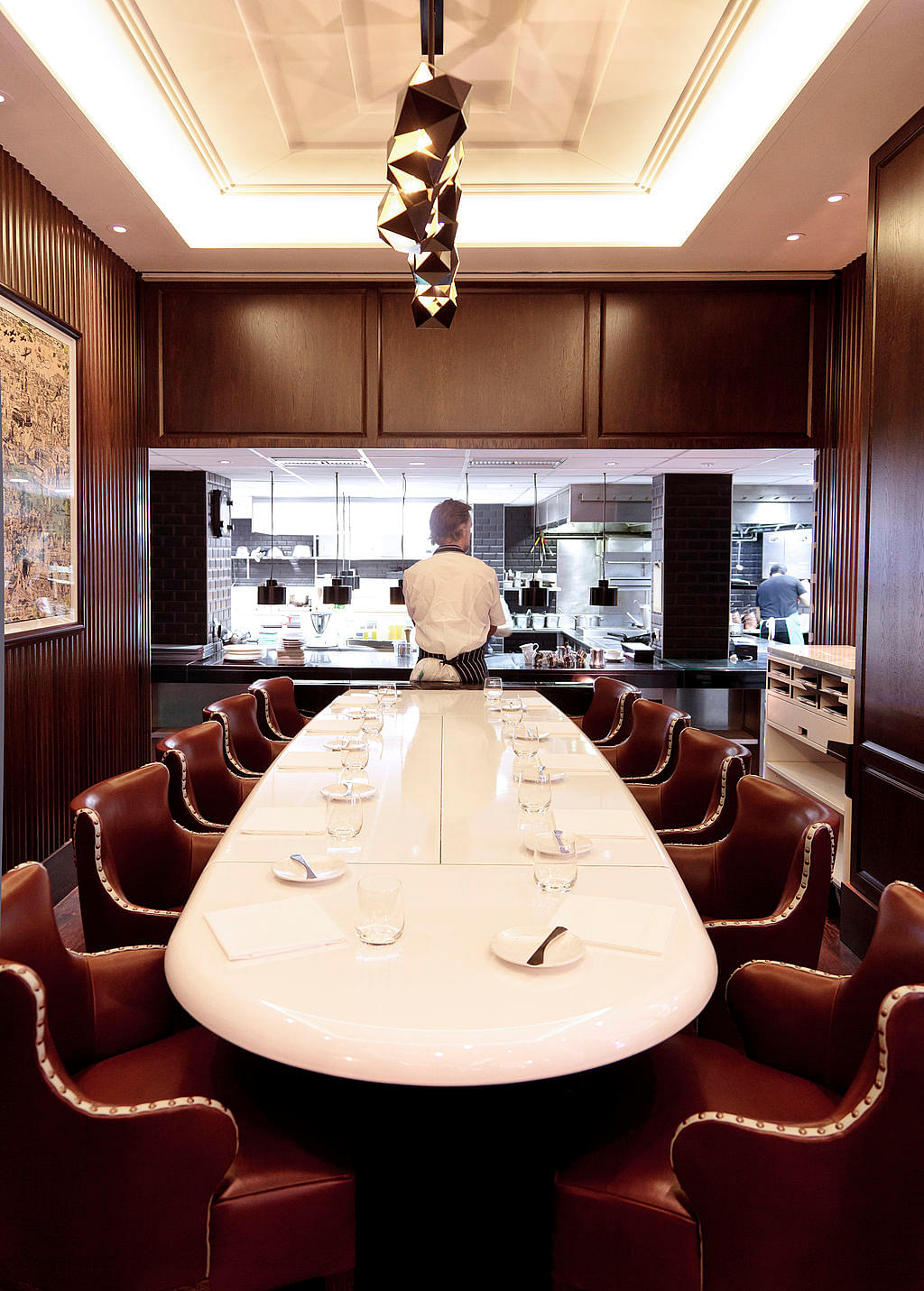 Chef’s Table is considered by many to be the ultimate culinary adventure, and an effective trend setter. But is it? We look at how the table came about

Circa 1556: Akbar paces in his khwabgah (royal chamber) tense and anxious. He is just a few weeks away from the coronation day – a day when he would be proclaimed the Emperor Of India. But is he ready? Clearly Akbar is an unparalleled strategist and warrior, but the hard life of a refugee and a soldier has left him bereft of the necessary skills of royal host. Humayun, his father, was said to be a host par excellence – but can he, the conqueror of all lands, live up to what is expected?

Akbar was a frugal eater. Mostly vegetarian, he indulged in rich meaty dishes and dals occasionally and was happy being served the lazizan (Gujarati khichdi) and falooda. But this wasn’t his usual day, nor was it the usual occasion where nobles were treated with the lavish spread of 400 dishes – this was THE DAY history will remember.

Unbeknownst to the king, the Mir Baqawal (Master of the Kitchen) Hakim Humam is on a deadline. Two days later, the king, who has never seen the door of his royal kitchen, walks the dark, mystical lanes of the kitchen towards a table set for four behind the chulha. What transpired in the next few hours could only be explained as a Chef’s Table, with Humam taking the emperor through each process, ingredients, and preparation as tasting-portions of dishes made their rounds, one after the other.

It wouldn’t be the only time that an Emperor would sit on such a table. Years later, Jehangir too would summon for a similar arrangement to know how his food was prepared? The reason of course would be a matter of life!

In fact, chefs table was a way of food in olden times, at least for the royalty. Then kitchens weren’t just places where food was made, but culinary labs where innovations took place. Yet, no dish, however astounding, would reach the king/nawab/begum or emperor unless it passed the muster of the Mir Baqwal, Ustad (senior most cook) and the hakim (doctor), who individually approved a dish for its taste, technique, use of the right and expensive ingredients and health. The scene would play like this: A table would be placed in the kitchen at a vantage point where the three experts could observe every action, and could also question each khansama presenting his dish. It was much like the MasterChef series of today only with much charisma and ingenuity!

Of course, with royalty disappearing, such fancy setting became a part of fables, told time and again. That was until the restaurant business started booming – and by restaurants, we mean the true blue-blood kinds that were high on experiments, ingredients and theme.

It is said that the Chef Table revived in France back in mid-1980 with two French chefs, Fernand Point of La Pyramide and Frédy Girardet of Girardet. Masterchef Charlie Trotter, who was among the few to experience the meal there, described it as:

“All four elements were happening in equal measure — the cuisine, the wine, the service, and the overall ambience. It taught me that dining could happen at a spiritual level.”

Julia Child, who learnt and refined her cooking style by touring the restaurants in France, too talks about the existence of Chef’s Table back then. In her memoir, “My Life In France”, Child calls them “accidental learning opportunities” that helped her not only sample some of the best dishes made by the chefs then, but also learn the technique. In fact, the homemaker-turned-celebrity chef notes that she would often deliberately choose a chef’s table to understand the dish and the technique more closely.

Incidentally, in spite of the table’s wide existence it was a privy of a privileged few. But that was till Charlie Trotter threw open the first Chef’s Table, and in a way coined it too. The year: January of 1988.  The table was situated in the kitchen so guests can watch food be prepared. It was the first time in modern culinary history that a head chef prepared food live for the guests, which was tailor-made for them yet had the element of surprise. It was a predominantly vegetarian meal.

When did the Chef Table come to India again, no one really knows. But as a concept, Chef Table – or at least a part of it – debuted in 2001 with Chef Sabysachi Gorai. Then the head chef with Bellisima, a fine dine outlet in Mumbai serving New World Cuisine, Chef Gorai introduced the concept of ‘The Tasting Menu’. Especially crafted by the chef with each dish individually plated – which was the big highlight then considering that the only dish that came  pre-plated in most restaurants was the Thali – the menu was an ode to Charlie Trotter’s idea of playing up with vegetables to give food newer dimensions.

What followed was an array of half baked attempts with little success, until the emergence of a Chef Studio. The brainchild of Chef Hemant Oberoi, Grand Executive Chef, Taj Properties, the Chef Studio that was billed at close to 13 lakh a seating, officially brought in the concept of Chef’s Table, but with a twist. Instead of placing the table inside the kitchen – which traditionally defines a Chef’s Table — the Chef Studio was a room with a specially- designed kitchen and a table that gave the same vantage point for the guest.  With serving staff kept to the minimal, it was an open kitchen where you could discuss food with the chef and even learn the techniques of plating.

Such was the rage of this rarely before-seen concept that in less than four years every establishment – be it hotels or standalone restaurants – had a chef table of their own. What helped was the advent of the open kitchen. Thanks to the island-style kitchen, Trident started its chef table at Frangipani in a nook that afforded privacy to the set of diners while they could be a part of a running kitchen.

However, when it came to restaurants, having an open kitchen was an issue with space. And thus, instead of the guest being called in, the chef came out to dine. So while the menu is still designed by the chef with special ingredients – a few of them expensive – and the sommelier still ensures the best of wines are poured, the ‘accidental learning experience’ which comes from watching the chef in action is missing. Of course, an argument can be made in favour of the personal interaction one can have with the chef while sampling the exotic fare – which these days are a part of the menu – as the big takeaway, the charm of learning (second) hands-on is still missing.  A better alternative in this case is the Chef’s Menu that Masala Library has started – which is a blend of Chef’s special, including a few new ones, offered at a price that is more viable than a Chef’s Table, with a chance to interact with the chef.

So does that make a Chef’s Table worth the while? While many may disagree, given the exorbitant tab that such a table demands, the “culinary adventure” that a Chef’s Table gives is unparalleled – whether it is with the chef inside the kitchen or on the table sitting with you.

It isn’t just a showcase of a chef’s art; it is an ultimate adventure of palates and visual appeal! In fact, it is the best table in the house!