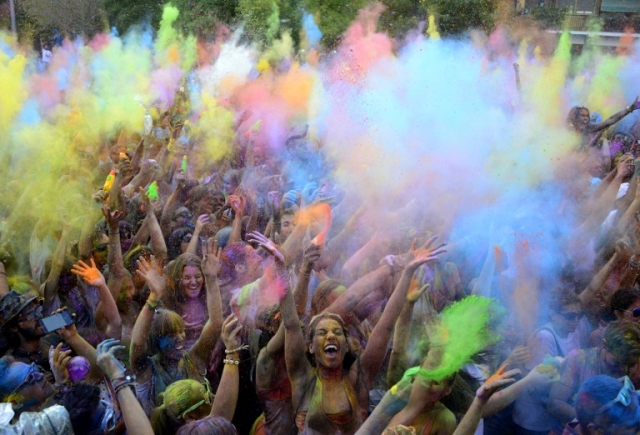 The idea of a free India is in the right everyone has to her diverse thoughts and actions. Moral policing is as much against the idea of India as is the hue and cry from a particular section of the intelligentsia about the rise of Hindutva.

This particular poem has become a sort of de-facto definition of the often misunderstood and misused term “freedom”. The freedom that is referred to here is doubtless not the political freedom we’re so used to celebrate every year, year after year on 15th August. It’s more of an intellectual freedom. The use of this poem has almost become a cliché, something like the “Mere paas Maa hai” dialogue from the Hindi film Deewaar.

Liberals and conservatives, left and right and center, everyone alike use this poem in a variety of scenarios, suiting their need.

It would be interesting to trace the roots of the concept of freedom, as expressed in this poem, from an Indian perspective. Often the origin of anything, a tradition or a culture, becomes so obscure and different from its present form that it’s hard to even correlate between the two. For a concept as abstract as “freedom”, which can be interpreted in innumerable ways, it’s not that easy to even trace the origin. Over the years, as and when our civilization matured, the concept evolved too. So, it may make sense to look for the concept during a very nascent stage of our civilization, when the idea would have been very raw, unadulterated. Then, the Rig Veda, the earliest surviving text of our country, may be a good candidate to start with. Given its antiquity, we may assume that the idea of freedom, as found in the Rig Veda, may be original.

It’s common in any ancient culture to represent an abstract idea with a simple physical action. Many words for strength across all languages had originally this idea of a force or injury because that was what it meant to the early humans to secure their existence and prove their strength and superiority in this world. Daksha, from the root daksh, means dexterous, intelligent, strong etc. in Sanskrit., akin to Latin dexter, meaning strong. But, another meaning of daksh is to hurt.

So it’s very likely that the simple idea of physically “freeing” the water or the river or the cows is intended to mean something deeper. In all the physical actions of freeing, one thing that’s common is equating enmity with obstruction or restriction. Ahi, the glacier-dragon, obstructs the free flowing of the water. Hence Ahi is an enemy. The clouds obstruct the rains. Hence they are enemies too. So are the dams that obstruct the rivers. So obstructing, or rather restricting the natural course of anything is bondage and the absence of it is freedom. A river is free when there’s no dam. Waters are free when there are no glaciers or clouds.

Now let’s consider the 112th hymn from the 9th book of the Rig Veda. It says, “Diverse are the thoughts and actions of the people, nananam dhiyo vratani jananam. A carpenter seeks something that’s broken, a doctor a patient, the priest a worshiper, taksha rishtam rutam bhishag brahma sunvantam icchhati… I’m a poet, my father is a doctor and my mother a grinder of corn… We desire the [same] wealth with our different thoughts, nanadhiyo… The male genital, shepa, desires a [woman’s] hairy cleave, romanvanta bheda, and the frog the water…’

The above hymn very explicitly pronounces a very important thing, that people’s thoughts and actions are naturally diverse.

The implicit message is doubtless that the desire of a carpenter, to repair a broken piece of furniture, or that of a doctor, to tend to a patient, may be as different from a man’s urge, to have sex with a woman, as is the desire of a priest, to perform a ritual for a worshiper, from that of a frog, for the rain-waters, but the diversity is all very natural and nothing to be surprised about. A logical extension of the same line of thought would be that, any obstruction to any of these diverse thoughts and actions would attract the wrath of Indra, who strikes with his Vajra against any form of curb on “freedom”.

J Muir, in the fifth volume of his seminal work, Original Sanskrit Texts on the Origin and History of the People of India, Their Religion and Institutions, provided a metrical translation of this hymn. He writes:

All craving wealth, we each pursue,

By different means, the end in view,

Which too far off have strayed to browse.

This is exactly what Sri Ramakrishna has also said, but in a much more simple way: Jato mot, tato poth: There are as many paths as are thoughts or opinions.

So, combining the two things – Indra’s obsession with getting rid of anything that obstructs a free flow and the importance of diversity in thoughts and actions – we get a very rudimentary idea of freedom in the Rig Veda as the Right to Thought and the Right to Action. And, anything that obstructs the diverse paths of lives, the diverse thoughts and opinions, is the lack of it, a bondage, which Indra loathes and strikes with his Vajra to destroy.

The expression “shepo roman-vantau bhedau ichchhati”, used as an example of diverse action in the Rig Veda, literally means “a penis desires a hairy vagina”. Griffith’s translation of it as “the male desires his mate’s approach” or interpreting it as “a tail desiring a hairy slot” smacks of Victorian hypocrisy of replacing penis and vagina with ridiculously laughable terms like “tail” and “mate’s approach”. The Rig Veda calls a spade a spade. It may not be a digression here to note that in the 4th verse of the 129th hymn on Creation in its 10th book, it says, “Thereafter rose Desire, kama, in the beginning, Desire, the primal seed and germ of intellect, manaso retah prathamam.” It’s interesting though to investigate how sexual desire, which was seen as the seed to creation in the nascent days of our civilization, over time came about to be a thing of taboo.

Another very important thing emerges out of this hymn. It puts the brahmins, carpenters, doctors, corn crushers, frogs and men desirous of sex with women in the same league, as though the only differentiating factors between them are their diverse thoughts and actions, nananam dhiyo vratani. Over time, the Brahmins, the doctors and the carpenters may have all been classified in different castes and social ranks, and open acknowledgement of sexual desires may have come to be considered immoral.

But, the different occupations of people, or the different forms of desires that drive different human beings, were once treated as mere natural diversities rather than the basis of social classes or moral norms. From this hymn, it can’t be said that during the time of the Rig Veda, certain occupations were looked down upon, as they are today. The dignity of labour is also another aspect of right to thought, right to action, right to do any work without getting marginalized or being looked down upon.

Going back to the concept of freedom in the Rig Veda, it can be further noted that the terms or expressions often used as epithets of freedom literally mean room, space and happiness. At one place (100th hymn in 10th book) it says, “We ask for freedom and complete felicity, sarvatatim aditi.” The word “aditi”, denoting freedom, is interesting. It means boundlessness, infinity, eternal and infinite expanse, immensity, inexhaustible abundance, perfection, unimpaired condition etc. The words “varivas” and “uloka” are used many times to mean freedom. Varivas means space, free scope, ease, comfort, bliss and also wealth and treasure. Uloka too means room, open space.

Where tireless striving stretches its arms towards perfection;

Where the clear stream of reason has not lost its way…

Where the mind is led forward by thee

Into ever-widening thought and action;

Into that heaven of freedom, My Father, let my country awake.

Alongside this concept of freedom, which essentially means boundlessness, there’s also another aspect of freedom whose embrace is, in Tagore’s words, ‘in a thousand bonds of delight’. He says, ‘Thou ever pourest for me the fresh draught of thy wine of various colours and fragrance, filling this earthen vessel to the brim. My world will light its hundred different lamps with thy flame and place them before the altar of thy temple.’ This essentially refers to some binding that’s necessary to ‘feel the embrace of freedom’, enjoy the various diversities of the nature in the form of the hundred different lamps, the various colours and fragrance. In an essay, Tagore explains you need to “bind” the strings of a sitar to “liberate” the diverse notes of music. This binding is not the obstruction that Indra loathes. It’s something that brings in the unity in the diversity.

The last hymn of the Rig Veda talks about this unity, this discipline, this binding, without which the freedom wouldn’t be a delight any more:

United be the thoughts of all that all may happily agree, samanam astu vo mano yatha vah susahasati.

The essence of this hymn is not different from what Eleanor Roosevelt said: Freedom makes a huge requirement of every human being. With freedom comes responsibility.

India and Pakistan got freedom at the same time. What makes India much different from Pakistan today is perhaps that India took her responsibilities seriously.

The use of the term “freedom” has become very opportunistic nowadays. Interestingly, the very people who raise their voices against any sort of moral policing or curb against freedom of expression, themselves fall into their own trap and come about as obstructers to other thoughts they don’t espouse. A representative example in this regard is this article which goes on and on saying that the “Sangh Parivar attacks the very idea of India”. It says that the Sangh hates Gandhi, thereby implicating that it’s against the idea of India.

Incidentally, many Bengalis too hate Gandhi more than the Sangh affiliates, out of their love for Netaji Subhas Chandra Bose. There are books like Ami Subhas Bolchhi (I’m Subhas Speaking), which are replete with venoms spewed against Gandhi. Many Bengalis from the erstwhile East Pakistan who went through the trauma of Partition still feel that Gandhi gave away too much to the Muslims. So technically some Bengalis are indeed more unabashed Gandhi haters. But does that make them against the idea of India?

Indra’s Vajra is needed to strike the moral police as much as the self-proclaimed secularists, because both obstruct the free flow of thoughts and actions. Indra’s Vajra is perhaps needed also to bring in unity among her 1.25 billion people, so that they can speak together, let their minds be in one accord, let their thoughts be united. That would be truly the “heaven of freedom”, into which Tagore wanted his country to awake.