Where Are The Stories? 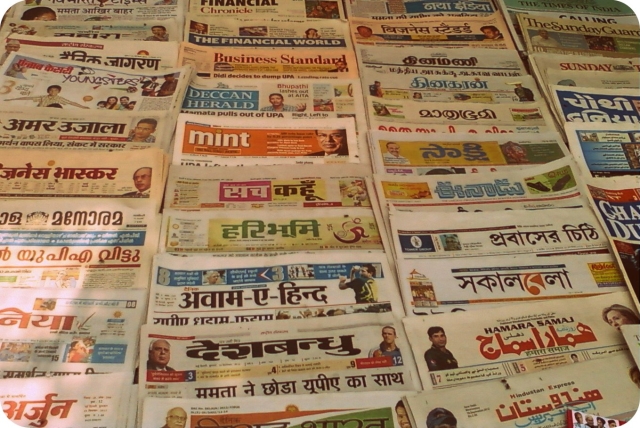 They come from those who travel and talk to people, and the ones that are deprived the chance of being diplomats of Delhi and Mumbai.

I recall watching a fantastic TED Talk by Shashi Tharoor. Amongst a variety of interesting topics, he touched upon one point which was unique and has stayed in my mind forever. It was that India’s soft power lies in its stories! This is perhaps a nuanced position that needs to be enunciated. Especially because, in my opinion, it is this very soft power, that Tharoor spoke about, that is in grave danger today.

Last year, P Sainath, a person whom I would disagree with on nearly everything, gave a nice interview to Newslaundry making a point that some successful journalists from regional languages have been making for a while. The rural reporter, the labour reporter, the ground reporter is dying. He spoke at great length about how the labour reporter has disappeared from the newspapers and why it is detrimental to news. Now, a person who manages industrial relations is the person who reports on labour. So essentially, he speaks to the PRO of the industries and gets to hear how the labour is doing! Shocking, isn’t it?

Even worse, agricultural reporters are the guys who cover the agricultural ministry in Delhi! As he says, “When you do not have an agricultural correspondent, a labour correspondent, what you are saying is that I am not interested in the 75% of the population as they don’t make news.” There are no reporters following the rural migrants, the homeless. And all this is disturbing. On this occasion, I couldn’t help but agree wholeheartedly with Sainath.

Why is this happening? How many bleeding heart journalists who claimed to have lost their sleep over farmer suicides in Maharashtra, can, for example, talk about what crops the majority of these farmers grow? What are their problems exactly? If repayment of the credit is an issue, can we have some sort of insurance? Is there a possibility of risky investments by the farmers?

To answer any of these questions would require colossal efforts to understand agriculture, intellectual honesty, ability to make sense of the numbers, and the adroitness to get the stories out of the distressed people by making them speak. Does our Delhi-based Lutyens’ brigade, immersed in their cocktail parties, have any of these traits?

Most certainly not. And yet, they wield influence. That is where the issue is. Journalists have ceased to bring out stories from India. Now, India has to listen to the stories from Delhi. South Delhi. Lutyens’ Delhi.

While it is far from clear as to what is the impact of the English media in India, one is hard pressed to not notice the conspicuous absence of stories that belong to India and its people. And the problem, slowly but steadily, is seeping into other media as well.

With the notable exception of Ravish Kumar, whose politics I disagree with, I cannot think of a single journalist in Hindi, who is both big on the national scene and also frequents the Hindi heartland. And it is for this reason that Ravish, despite his politics, stands head and shoulders above his counterparts. However, the impression that I, as an outsider, get is that even journalists like Ravish seem to be distant from the echelons of the elites of Lutyens.

Perhaps the reason why most of our “celebrity journalists” resort to only speaking about either “I know X, I know Y” in their articles or they talk about “the philosophy of constructivist liberalism in 21st century and how it affects the saffron intrusion in the liberal discourse of moral relativism”., is that there’s only a limit of diversity you can bring to the table confined within the wheeling-dealing walls of corridors of Lutyens. But then, media is a ruthless business. Out of sight is out of mind. So, they have to say something frequently. Hence, the garbage is packed in thousands of words.

And while this coterie has gained prominence thanks to the rise of electronic media in the last fifteen-twenty years, another group that has claimed the ladder rather quickly are the data nerds. These are essentially people who have marginally more proficiency in Excel than the practically illiterate group we see.

But the story pretty much ends there. Make no mistake, one ought to celebrate the data-based, backed-by-facts, logically coherent approach in reporting. But the problem is that much of what we see in these “data-based” write-ups is a hogwash attempting to purport an intellectual image devoid of science.

For a great example of this, recall a famous mainstream TV journalist’s article on Love-Jihad. The unfortunate thing isn’t that this piece was published. But it is rather that this was heavily shared by many other “top journalists” who thought a myth had been debunked through serious data analysis. (This is NOT to say that I believe that the claim he was trying to disprove is true or false.)

Alberto Cairo of The Functional Art has an article worth reading regarding the topic of shoddy data journalism. He says:

“Data journalism, at least in some of the stories and blog posts that these organizations are publishing, has become ‘datum journalism,’* a term that I’ve stolen from Census Reporter’s Ryan Pitts. It’s a pity. Some of us had great hopes. We still do, I guess, just because we want these publications to thrive, but patience isn’t an infinite resource.”

(*As “datum” is the singular of “data”, a “datum journalism” story is one in which grand theories are derived from insufficient evidence.)

“Correlation is not causation,” “Anecdotal evidence isn’t really an evidence”! I am sure many of us have had these statements thrown at us at some point of time in debunking any argument that we make. True as these statements are, without a doubt, I think we have come dangerously close to interpreting these as “Correlation implies no causation” or “Anecdotes are false”.

And this is dangerous. This is what prompts me to write this article. We need the Tharoor approach. India is a land of stories, of its contradictions, of its mystics, of its spirituality, of its diversity. Yes, these are a cliche. But they are so precisely for their truth. This is not to say that no pieces with numbers should be present in the media. Of course not. But let’s not celebrate one thing over the other. Probably, the cause of social media being fed up of the mainstream media is that the stories are concocted in Delhi and fed to us as if they are real.

But then, the solution is to have storytellers from all over the country tell their stories. A number of non-English media houses employ a good number of rural reporters who bring in stories. But the number is dwindling from what I know. Which is why, when I saw an initiative like Khabar Lahariya on Twitter I was pleasantly surprised.

It is the stories that help us form a perception about what it’s like to be in a certain part of the world. They arouse the emotional side of us. We all learned about our neighbors’ dietary habits, weather from our Geography textbooks. But do we remember that? Possibly not. But we do remember stories from them if we did read any.

As John P. Kotter says in an article,

“Over the years I have become convinced that we learn best–and change–from hearing stories that strike a chord within us. The dry academic tomes I wrote very early in my career were earnest reflections of the research I conducted, the analysis I applied and the conclusions I drew. And they had few readers, mostly other academics. I learned along the way and started including more and more stories in my work. My later books were read by many more people than my earliest work.”

That is the power of stories.

Make no mistake, I am not suggesting getting rid of philosophical, or intellectual discourse in the media, or data-based articles. Rather the point is that the grand picture will only make sense when aided with stories. As a student of economics, I have noticed some great research questions that people worked on emanated from stories. Not from reading a shoddy data piece in some newspaper or an article about a hundred isms.

I make it a point, every time I am in India, to meet with some journalists working on the field in India. Such meetings have always given me a lot of food for thought. It’s not that they articulate a research problem in economics that is mathematically well-posed, or analytically challenging. Very rarely.

Every single time I go to India I make it a point to meet with my journalist friends and play the role of a listener, for they bring stories. They bring the stories from some sugarcane farmers in Satara, some retired professional educating children in some village, or some activist siphoning off money in the name of welfare, etc. But then, sadly, or maybe not, these journalists don’t seem to be making their way to Delhi or Mumbai.

It is here that the intellectual class sits and decides the discourse. It’s not these stories that they care about. It’s the stories that will help them climb the ladders they want that matter. We are forced to listen to their concoctions as they seek their goals. The goals that the rest of India has little to do with.

Fortunately, things are changing. The empire is crumbling. Social Media has announced its arrival. The biggest sign of this growing discomfort is when you see celebrity journalists labelling those that expose them as trolls. I am not saying abuse or instigate. Pure expose. On facts, reason, and logic. We no longer need the elitists of Lutyens to tell us in a thousand words about liberalism, fascism and what not. We have people who read. And we have the internet. It connects those who know with those who seek to know.

It is when we force the Lutyens’ brigade to either travel within the country, learn, show humility and narrate what they see that we can hope to exercise the soft power of stories that Tharoor spoke about. The billion of us should not be caring about the stories of a few thousand in South Delhi. They should be the one listening to our stories.

Anecdotes of ‘mango-people’ aren’t false. The greatest writers India produced weren’t ensconced in chairs in South Mumbai or South Delhi. They travelled. They talked to people. They heard them. Their stories are the stories of the ‘mango people’.

India’s hopes rest in ensuring that all those amateur philosophers writing weekly Op-Eds, the wheeler-dealer journalists whose only forays outside Delhi are on vacations at some resorts isolated in every dimension from the place they travel to, all those who’re forced to gulp bottles of scotch everyday ruminating over the “secular fabric of India at risk due to the rise of fascist forces” are brought to their size. The attention they receive is disproportionate to their understanding of India.