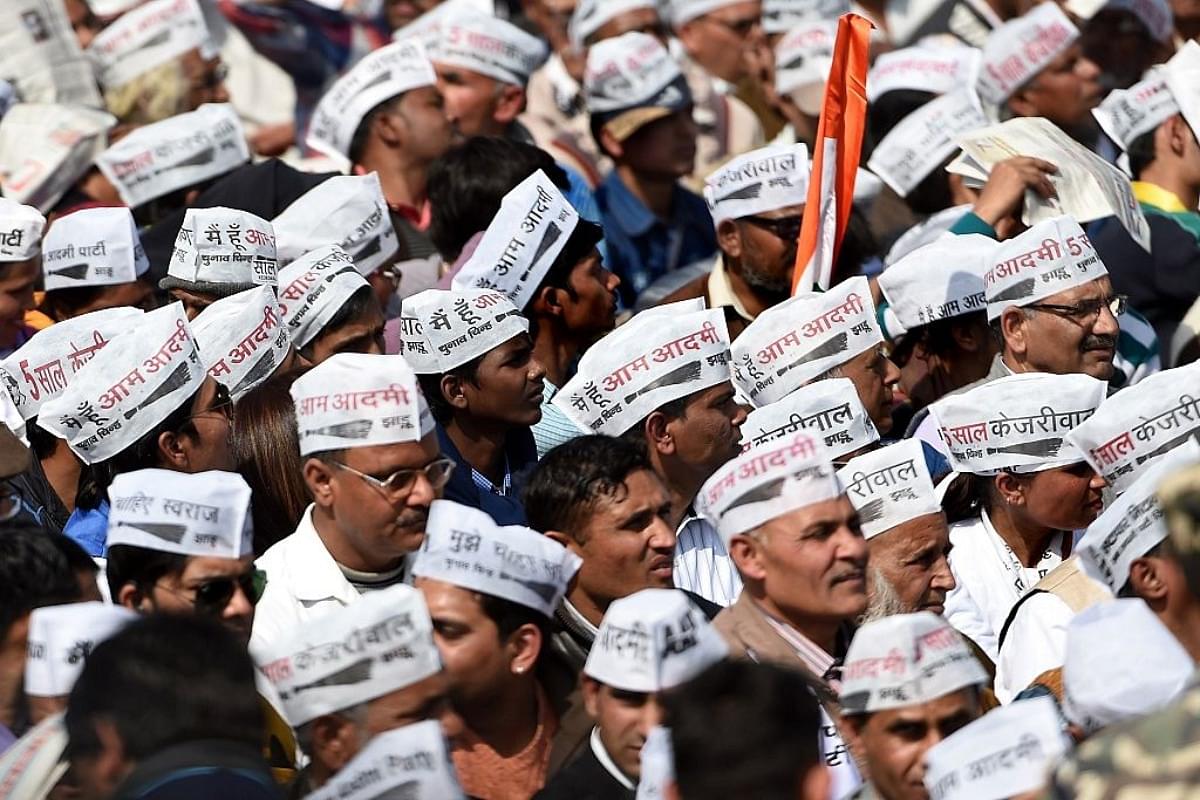 In an India Today feature on the Municipal Corporation of Delhi (MCD) polls, the reporter speaks to candidates put up by BJP and AAP in Greater Kailash, one of the posh localities in South Delhi.

For the ward reserved for women, Aam Aadmi Party's (AAP) candidate, Ajit Kaur, is flanked by her husband, Lovely Singh, who is seen to be answering for her.

Even though the reporter tries to have Kaur speak a few words on the issues concerning the constituency, her puerile responses do not offer clarity.

It appears that Kaur has been put up as a face, while it is her husband who would be running the show, if she wins.

Watching the report, one wonders the compulsion behind AAP's choice of candidate.

Since the AAP released its list of candidates for MCD elections, a mutiny of sorts has erupted among its ground workers. The feeling of being cheated, by the party they thought is incorruptible, is palpable in many.

The party, already battling with allegations of financial irregularities in key government policies, is now caught in a new “cash for ticket” scam.

This time, it is not a probe recommended by Delhi Lieutenant Governor Vinai Kumar Saxena, but a series of sting operations conducted by party workers that have raised questions on the credibility of its leadership.

It began with a sitting councillor of AAP climbing an electricity transmission tower, alleging the sale of tickets in the MCD polls. He was quickly dismissed as a disgruntled worker.

Soon after, the Anti-Corruption Bureau arrested the brother-in-law and close aides of AAP MLA Akhilesh Pati Tripathi for trying to sell tickets. The evidence, in the form of a video, shot stealthily by an AAP worker, exposed the underbelly of AAP’s functioning.

It was alleged that Tripathi had asked for Rs 90 lakh from Shobha Khari, an AAP worker in order to get ticket from ward number 69.

According to her, she paid Rs 35 lakh to Tripathi and Rs 20 lakh to Wazirpur MLA Rajesh Gupta. The rest of the amount was supposed to be paid once her name appeared in the final list of the AAP candidates.

However, in the final list, her name was missing. She was promised that the amount she paid would be returned to her. The video evidence was collected when those close to MLA Tripathi had come to return a part of the amount to her.

AAP leader and Deputy Chief Minister, Manish Sisodia, defended the act boasting that the incident proves that the tickets were not sold.

In Sisodia’s defence, lay a confession, if only partly.

While the party was still recovering from the shock, another sting rocked its boat. A woman worker from the party, Bindu, who sought a ticket from North West Delhi’s ward 54, brought out the video evidence of AAP’s creamy layer running a well-oiled syndicate selling party tickets.

She alleged that she was asked to give Rs 90 lakh and only then would her name be considered by the Political Affairs Committee (PAC) deciding on ticket distribution.

During the conversation, Goel reveals the way in which Delhi has been divided among various AAP conduits to collect money from the ticket aspirants.

She was told that if the money is not provided in time, she would not stand a chance among those who have already paid in full.

The official word from AAP, after these revelations, has been of complete denial. Also, no action has been taken against those collecting money on the party’s behalf.

But unlike, Bindu, other AAP party workers did not have the patience to collect evidence to prove wrongdoing. Some members took matters into their own hands and thrashed their party MLA, Gulab Singh, for allegedly gobbling the money taken from the worker but not delivering on the ticket as promised.

The visuals of Singh getting brutally manhandled must be a wake-up call for the party, especially with the local body polls due only a week from now.

Kejriwal: A Shadow Of The Past

Eight years back, AAP founder and convenor Arvind Kejriwal would do the rounds of media houses and press events holding a suitcase in hand.

In the suitcase, he would claim is the evidence of corruption against the then chief minister of Delhi, Sheila Dikshit.

Riding high on Anna Hazare’s anti-corruption movement wave, Kejriwal became a household name. He catapulted himself as the ultimate “aam aadmi”-cum-revolutionary, wanting to free the nation from the curse of corruption.

A noble cause, most people thought. Entwined with the promise of freebies, the formula clicked with the voters of Delhi, providing Kejriwal and his party the launch pad into India's polity.

Almost a decade since then, Kejriwal has become exactly what he once opposed, at least in public view.

He has defended his ministers accused of corruption, politicised investigation in alleged wrongdoings, and turned his party into a “money-making” entity — a glimpse of which could be seen in the latest allegations of the sale of party tickets in polls.

The slew of accusations by AAP workers against the leadership for selling tickets in MCD polls seems to have demotivated the cadre.

The AAP, which is banking on the face of Kejriwal to tide over the sea of disgruntled workers, does not realise the extent of drubbing it might be facing in the coming polls.