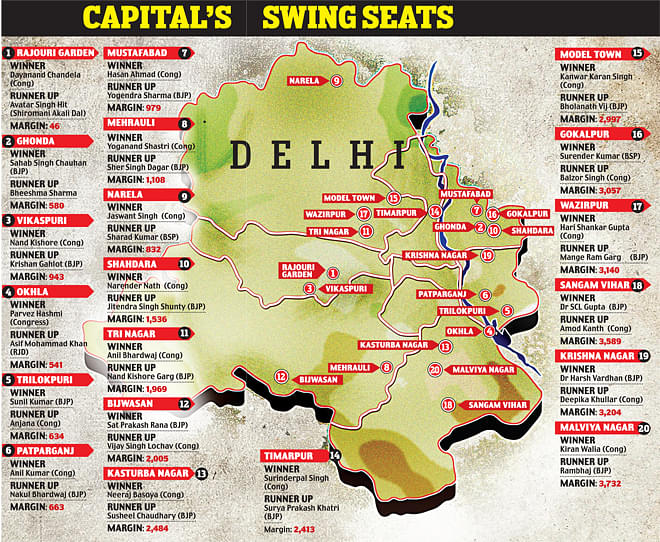 Are you satisfied with the performance of the Congress government in the state?

Do you think Sheila Dixit Government deserves another chance?

How do you rate the performance of the state government?

What are the issues which affect you the most as a voter?

Are you satisfied with the performance of UPA Government at Center?

Report card of the State Government

What are the factors /issues which could influence your voting preference?

Do you think Manmohan Singh needs to be re-elected?

Do you give weight age to party or leader while voting in election?

*Aam Admi Party is preferred by significant chunk of educated youth and middle aged men and a section of slum dwellers.

Who do you prefer as the next Prime Minister of India?

*Modi is the most preferred choice for PM post at 39% followed at distant second by Rahul Gandhi.Modi more popular among first time voters, young college goers, women and middle class

*Swing of 6.31% of vote away from Congress compared to 2008 Assembly election.The party is likely to lose 13 seats from 2008 elections. Nearly a third of sitting Congress MLA’s facing anti incumbency.

*BJP largely retaining its core vote but the party vote share is likely to decline to 34% from 35.14%.The party is gaining 10 seats compared to 2008.

*AAP is likely to poll close to 10% vote but could end up behind BSP which is holding onto its traditional vote.

*BJP’s inability to project a strong CM face is unlikely to significantly impact its poll prospects as the party is beneficiary of the anti incumbency sentiment.

*Poor ratings of the Union Government likely to impact Congress performance in the upcoming election.

*Close race between BJP and Congress but slight edge for BJP.

Are you satisfied with the performance of your sitting MLA?

Do you agree that the hike in electricity tariff is justified?

Which party do you think can provide better governance?

Which party do you think can bring down price rise and food inflation?

Whom do you prefer as the Chief Minister of Delhi?

*Shiela Dikshit remains the popular choice for Chief Ministerial seat at 22% followed by Arvind Kejriwal at 16%.Vijay Goel is the preferred choice from BJP for CM post.36% of BJP voters want Vijay Goel as next CM of Delhi

*A total of 823 respondents from 21 Assembly constituencies spread over 73 polling booths were interviewed during the field work.

*The respondents were provided with questionnaire in both English and Hindi depending upon the ease of convenience of understanding.

*The survey sample has cross sectional representation of the major caste and social groups proportional to the 2001 census figures.

*If the fugues don’t add upto 100% its due to the respondents either favoring options not given in the questionnaire and some having no opinion on the question posed.