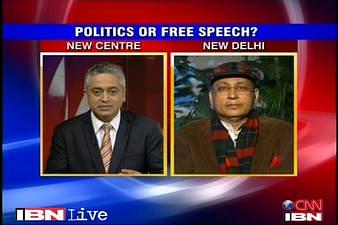 “But there was an injunction against publishing the CD.” “But the Delhi High Court prohibited us from telecasting the CD.” These were the reasons doled out by news anchors and columnists when harangued into explaining their conspicuous inaction despite the sheer TRP-generating potential of the CD allegedly featuring ex-Congress spokesperson and Rajya Sabha MP Abhishek Manu Singhvi.

The craftiness and astute anticipation with which Singhvi has acted in this episode must be admitted even by his detractors. As soon as he smelled a potentially explosive expose of the CD allegedly featuring him in a sexual act with a lady advocate reportedly desirous of climbing up the professional ladder, he got into the damage control act securing an ex parte injunction from the Delhi High Court against three media houses in possession of the CD. An ex parte injunction is given without hearing the other side. Since justice requires due opportunities to be given to both sides to make their case, an ex parte injunction is given in extremely rare situations. The Delhi High Court, on April 13, considered this situation to be such a rare case.

The issue, however, is not with the legal basis under which the Delhi High Court issued the order, but, in fact, with the limited legal applicability of the order. The order of April 13  states as under:

Till the next date, the defendants, their agents and all others acting for and/or on their behalf are restrained from publishing, broadcasting, disseminating or distributing in any form or manner the contents of any alleged CD or any other material as described in the plaint in relation to the plaintiff No.2 (Abhishek Manu Singhvi)

So, who exactly was restrained pursuant to this Order? Three categories – the defendants (Singhvi’s ex-driver and the three media houses), their agents and all others acting for and/or on their behalf. Not the world at large. Not, by implication, other channels (unless they “act on the behalf” of the three media houses) who were reportedly in the possession of the CD at least a couple of days prior to the injunction.

Therefore, could media channels other than those who were named as defendants telecast the CD if they really wanted to? The answer is, yes. Indeed, Singhvi could well have obtained an injunction against them the next business day, but the media channels would have got away by using regular disclaimers and words such as “alleged” and “reportedly”. When have news channels feared such lawsuits in the past anyways?

So, what could be the reason media houses decided to hold their otherwise eager horses? This has led to several speculations. And with each even partly believable speculation, the media’s credibility and consistency comes under severe doubt yet again.

Did other media houses decide not to telecast the CD or report about it because of a genuine belief that the Delhi High Court restrained them from doing so? In that case, either these channels have been lazy in obtaining objective legal advice, or incompetent in understanding the applicability of the order. But this is unlike the recent behavioral pattern of the extremely competitive media.

Were they notified by Singhvi or other lawyers acting on his behalf that the world at large was restrained and they dare not telecast the CD? If so, did they take it on face value? This is, again, unlike how same channels have gone about telecasting several other stings with unabashed courage and fearlessness.

For example, leaking the Army Chief’s letter is a grossly illegal and punishable act whether or not there is a court order. It still does not stop the media from reproducing the letter or reporting on it. The difference, as media would likely point out, is that the Army Chief’s letter entails questions of national interest whereas the Singhvi video does not. The dishonesty in that argument is that even if allegations that Singhvi used his influence to assist the lady in question for a judgeship pitch are baseless, the very fact that the ‘private’ act allegedly took place in ‘public’ premises, nay, in the temple of justice, should have raised questions about the serious public interest involved in this.

The judiciary is a crucial pillar of our democracy where the poor and the rich alike seek justice. The act allegedly happened in a chamber space leased by the court to lawyers discharging their duties in this process of justice. That the media is simply uninterested in probing it at all raises severe doubts on its intentions both in this matter and in earlier cases where it has persisted with probes to the point of destroying careers.

Strange bases have been meted out by the media in a contrived attempt to differentiate between the “principled stand” in Singhvi’s situation and “courageous stand” against other hapless public figures in the past. The sermons, often peddled as journalistic ethics, become sophistry amid this blatant doublespeak.

Throwing the baby out with the bathwater is the luxurious tendency of the powerful when the wave goes against them. Continuing to do so in the vibrant democracy of ours, however, will only isolate the powerful further into their bubble to the eventual point of oblivion.

Post-Script: The purpose of this article is not to conclude whether the CD should have been telecast or not, but to analyze media’s behavior in this episode in the backdrop of the misunderstood scope of the injunction.