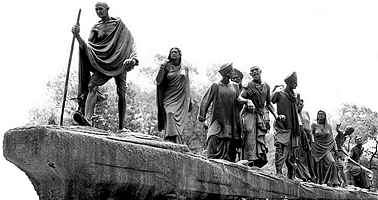 I am not in the habit of rebutting every ill-informed position taken on crucial episodes of Indian history, more so if they happen to be articulated by half-baked intellectuals and public personalities with quarter degrees, awarded under aliases from foreign universities. But at times even some ignorant comments made by specimens in the above category need a response.

Congress Vice President Rahul Gandhi’s recent comment against RSS and the Gandhi assassination is a case in point. I begin this discussion by conceding that regular and uninterrupted sips from the poisoned chalice of power, ever since he had been publicly anointed heir-apparent, has begun to take its toll on Rahul and has induced in him an irreversible process of mental debilitation. That said, however, one should not acquiesce to his distorted articulation of Indian history.

I shall not enter into a detailed debunking of the theory that the RSS was responsible for the Mahatma’s assassination; that has been amply and ably done by others and has been by now resoundingly disproved as malicious propaganda perpetuated by the Congress and its intellectual henchmen from among the Communists. Suffice it to say that having personally monitored the investigation into the Gandhi assassination case the indomitable Sardar Patel, who, as his daughter Maniben recorded, was never “amenable to blackmail”, wrote to Nehru that it has clearly emerged that the “RSS was not involved in it at all.”

Of course I am being fair when I say that I do not want to indulge into a long winded discussion on why a large number of people believe that Rahul’s great grandfather had a hand in the death of one of the tallest leaders in independent India’s history, a leader who did much to establish democratic and constitutional norms in the country, Dr. Syama Prasad Mookerjee. Shooting off one’s mouth and trading charges does not really help, does it?

That the RSS was opposed to Patel is another of those myths perpetuated by members of the Congress first family just in order to blanket their own visceral intolerance for that man. It was Patel who invited M.S.Golwalkar, second Sarsanghchalak of the RSS, to mediate between the union government and the Maharaja of Kashmir when accession talks were in progress. Golwalkar, every inch a nationalist, responded to Sardar’s call. These are well documented episodes in post-independent India’s political history and would withstand scrutiny of any academic lenses. Just because the Congress V.P. is not into the habit of reading and reflecting does not mean these evidences do not exist.

What Rahul usually omits mentioning is his own great grandfather’s and grandmother’s attitude towards Patel. Perhaps a short reiteration would be in order here. Sardar’s biographer and collaborator, V. Shankar has recorded how Nehru’s brazen behaviour and attitude increased Sardar’s mental anguish which in turn affected his health. Referring to the final phase, Shankar wrote that medication did not prove effective and Sardar was losing strength, “there was no doubt that the physical deterioration of his health was accelerated by his mental anguish.”

S.K. Patil, of the Congress recalled how Jawaharlal “objected to the raising of Sardar’s statue in the famous Vijay Chowk in front of the Secretariat building in Delhi.” It was with great difficulty that Patil “could secure another venue on Parliament Street” but Nehru ensured that the Congress Memorial Fund, raised for the purpose was not used.

Madhu Limaye, for instance, criticised this deliberate omission of the Sardar by the Congress when he wrote that Nehru did not show the “generosity to confer the first Bharat Ratna posthumously on Vallabhbhai.” All those who succeeded Nehru ignored Patel and often conferred the award on themselves until 1991 when the award was finally conferred on the Sardar.

Rahul’s grandmother who in her correspondence with her father “never used the epithet ‘Sardar’ and only mentioned ‘Vallabhbhai’ ensured that Patel’s centenary in 1975 was a subdued affair which would eventually serve to blanket his mighty legacy.

Having discussed Patel I would like to bring attention to another towering figure of post-independent India’s history who suffered and eventually withered away under the supervision of a government that Rahul’s grandmother ran. Jayaprakash Narayan (JP) had no known kidney ailment and yet it was an inexplicable deterioration of his kidneys while he was a valued guest- in-detention of the Congress government during the Emergency that proved his eventual physical undoing.

M.G.Devasahayam, then I.G. Prisons, has recorded the welcome Indira’s political points man Bansi Lal, then Chief Minister of Haryana, accorded to the veteran JP, “Yeh sala apne aapko hero samajhta hai!! Usko wahin pade rahne do. Kisi se milne ya telephone karne nahin dena…” (This dam fellow thinks he is a hero. Let him lie there. Don’t allow him to meet anybody or telephone anyone.)

The sudden paroxysms of pain in JP’s lower abdomen during his detention were so excruciating that he swooned, perspired and felt “miserable and depressed.” JP himself, records veteran socialist Madhu Dandavate, repeatedly said, “I do not know, I never had this trouble at all. Very strange thing; I never suspected that I would get this disease; I do not know how it came; I do not think that my trouble has developed in the natural course.” The Commission of Enquiry instituted to look into the matter in its interim report by Dr. Nagappa Alva concluded that the “dysfunction of JP’s kidneys was left uninvestigated…drugs were used indiscriminately and his condition was allowed to deteriorate.”

JP himself seems to have been conscious of something deliberate behind his sudden affliction, “a number of friends have expressed a doubt which I share that my kidneys may have been deliberately damaged.” The forty-three days of detention by the Congress government proved to be the “darkest chapter in JP’s life”, in effect the phase crippled JP “for the rest of his life.” He died soon after.

These are phases of Indian history which have been unfortunately kept under wraps from Rahul Gandhi, he would obviously do well to take some fast-track lessons in them – for the moment his able and articulate tutors may leave out the L.N.Mishra episode as that would entail a broader discussion on the degeneration of conduct in public life that his party’s rule has brought about in the last six decades in Indian politics and of how his entire clan played a path-breaking role in it.

True history as opposed to fiction is hard to learn and even harder to articulate!