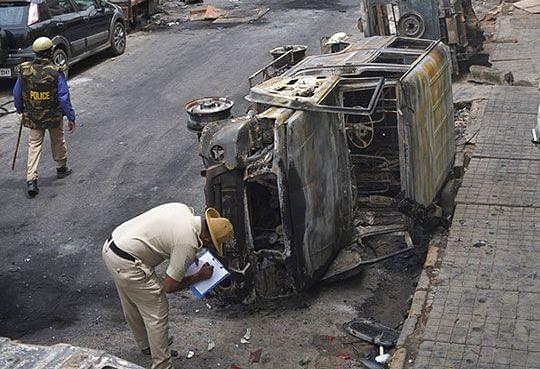 The aftermath of Bengaluru riots.

"We demand capital punishment for the one who spoke ill against our Prophet,” screams the woman, whose video has been going viral.

The burkha clad self-proclaimed social worker goes on a rant demanding the worst punishment for the young man who is said have put the derogatory post on Facebook.

She goes on to say, “even at the cost of our lives, we will not spare him. And had the police acted, people would not have to get on to the streets.”

If justifying the mindless destruction of public property and holding the city to ransom and completely dismantling law and order for what essentially was a social media post that could have been tried as a cyber-crime offence is one part of the narrative.

The other is the tales of how ‘innocents’ are being ‘falsely charged’, how ‘sole bread earners’ and ‘only support of families’ are being arrested.

The threat being issued by the woman in question in Bengaluru reminds one of similar faces of women who justify ‘wielding weapons’ ‘attacking police’ destroying public property’ or even rebelling against the nation if it is in the name of a religion.

It reminds one of the convenient battles then propped up by those who then make it an issue of a ‘woman being wrongly targeted and harassed’ for her ‘alleged’ involvement in these anti-nation activities.

This is an open threat. That if the administration fails to ‘hang the one who insulted the Prophet’ we shall not mind giving up our lives, but wont spare him”.

It is this thought that needs to be checked. At the earliest.

For this is the thought that has fuelled separatist movements in Kashmir, and surprisingly many of the recent arrests under the Unlawful Activities (Prevention) Act (UAPA) in the valley have been those of women.

Less than a fortnight ago Naseema Bano, mother of a dead militant, was arrested. Separatists have added her name to the list of women who have been made ‘political prisoners’ by the ‘Indian state’ while all she was doing was wielding a weapon and posing for a photo with her now dead terrorist son Tauseef Ahmad Sheikh. Recent reports have also shown how women over-ground workers (OGWs) are guarding and moving terrorists to safety by helping them dodge security agencies.

Dismissing the rise in women sympathisers to this cause and the semiotics of the arguments used each time, would only be negligence that costs dear. While it may have turned into meme fodder, the videos of a woman saying "he had only gone out to bring coriander leaves as he sold them at his shop, of them landing outside the MLA’s house seeking the release of their innocent brothers, sons, and husbands”, tell much more about the systematic creation and execution of a fool-proof formula of using women as much more than a shield.

Like how it was revealed by the Delhi riots charge-sheet, women acted as human shields, enabling the rioters behind them to pelt stones at policemen injuring many seriously and killing head constable Ratan Lal.

In the aftermath of every riot, gagging the voices of those who pay a price for believing in the democratic fabric of this country is the hue and cry of the ‘women defenders’ who will land up very orchestratedly each time the ‘brothers and sons’ have been arrested by the police.

The commonalities are eerie. And so is the apologetic reportage.

Despite the Kashmir police clarifying that she was “involved in much more serious offences and her role has surfaced in recruiting at least two youth into terrorist ranks, arranging arms and ammunition, communication and logistics for terrorists and terror organisations," what certain sections of the media reported is far from the truth and unabashedly portraying a 'troubled' mother of a dead son.

While the government can try and alter the socio-economic reality by educating, empowering and enabling the women from certain ‘troubled and troublesome’ sections (unfortunately they intersect), the ‘tears’ that follow ‘tear gas’ and paint a picture of police brutality also needs to meet an end.

Anyone who sympathises with any proven criminals/rioters/terrorists should be made to pay a price, no matter how nominal. This is not about vilification or social ostracization. This is about systematic dismantling of the modus operandi of anti-nationals firing at the system from the shoulders of those who should have been the ones arresting the spread of such thought.

The likes of a Tahera Begum, who disowned her son Qamer-Uz-Zaman, who joined Hizb-ul-Mujahideen should not just be hailed but made to be a part of social task force that breaks the cycle of sympathiser mothers defending young men who take to unlawful activities.

Even as the Karnataka government looks to try the rioters under UAPA, those who have been sympathising with them too should be made accountable.

Those who try to paint a sorry picture of the not-so-sorry elements too should be brought to book. The message needs to be strong. That law prevails even if sense doesn’t.