Nagaland 2023: Neiphiu Rio's Revenge Means That It's A Bipolar Contest Between NEDA And NPF; Congress Nowhere In Picture 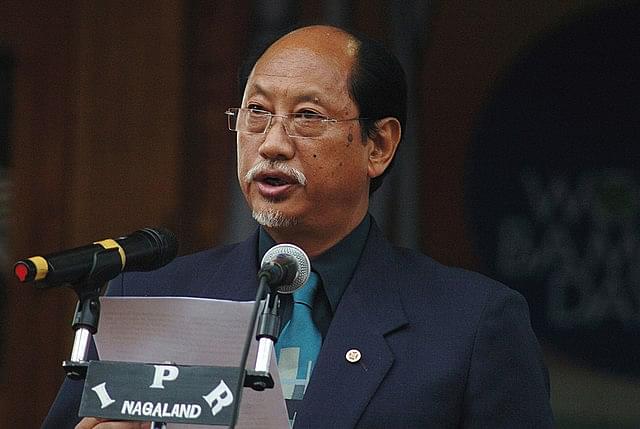 The hill state of Nagaland will go to the polls next month. It is a fascinating election in the offing because the results, whatever they are, will show how seemingly-innocuous butterfly effects manifest themselves later in significant political changes.

For two decades after the state was carved out of old Assam province in 1963, its politics was dominated entirely by local parties which had agitated for statehood. The Congress party actually didn’t participate in provincial elections till 1977.

From 1980s onwards, however, the reins of government fluctuated largely between the Congress and the Nagaland People’s Council (now called the Naga People’s Front, or NPF), interspersed with periodic terms of President’s Rule.

Then, the Bharatiya Janata Party (BJP) won an epochal mandate in 2014 under Narendra Modi, following which, it initiated an unprecedented socio-politico-economic engagement with the North East. This policy move, apart from transforming the region and integrating it with the rest of the country, also wrecked the old political rules.

In 2013, the NPF swept the state, winning 38 seats of 60 with a 47 per cent vote share under the leadership of Neiphiu Rio. While the NPF had been allied with the BJP, after a fashion, as a part of the National Democratic Alliance (NDA) since the Vajpayee days, the alliance was wholly one-sided as the BJP had no real presence in Nagaland.

There was also no pre-poll alliance between the NPF and the BJP in 2013, largely because the NPF didn’t need the BJP. Consequently, the BJP had to be satisfied with a solitary win, and just two per cent of the popular vote.

What was surprising, and in hindsight was a harbinger of things to come, the Congress slumped from 23 seats and 35 per cent of the vote in 2008 to just 8 seats and a quarter of the vote in 2013. Yet at the time, this decline was blithely attributed to local dynamics, and promptly forgotten.

The results of the 2013 assembly elections are presented in a table below:

Then, 2014 happened. Chief Minister Neiphiu Rio, astutely sensing the change that was set to pass in India, stood for elections to the Lok Sabha. He won with a landslide, handed over charge to TR Zeliang, and headed off to Delhi with a declared intention to improve the lot of the Naga people by leveraging this paradigmatic shift in Indian politics.

But then in 2018, Chief Minister Zeliang upset the apple cart by breaking links with the NDA ahead of the assembly elections. An incensed Rio resigned from parliament, split the NPF too, for the Nationalist Democratic Progressive Party (NDPP), and entered into a firm pre-poll alliance with the BJP. By this seat-sharing agreement, the NDPP would contest 40 seats, and the BJP, 20.

While Rio was not able to sweep the state as he had in 2013, the NDA did well enough in 2018 to form a stable coalition government. This is the results table:

TR Zeliang lost from Tenning seat. While this was a humiliating debacle for a sitting Chief Minister, it was equally the people’s wish to see him go, and just desserts for a man who betrayed the trust reposed in him by a senior colleague.

In one sense, Zeliang’s decision to break with the NDA, and Rio’s response to break the NPF, represents the difference between those who remain glued to the old ways (Zeliang), and those who welcome change (Rio).

However, the party which got most squeezed in this tussle was the Congress, which was comprehensively wiped out from Nagaland in 2018. Its vote share plummeted to a meagre two per cent, and it won nil seats.

This is actually not surprising, since the Congress, more than others, is the one party which still stoutly refuses to accept any sort of change in the old Nehruvian status quo. As a result, Nagaland joins a growing list of states where the Congress has ceased to exist.

But Rio’s revenge didn’t end there. From the 2018 assembly elections onwards, he started to tenaciously whittle away at the NPF – a party he had led for so long, and left trustingly in Zeliang’s hands. And today, the NPF has been reduced by defections from 26 to just 4.

This is the house position as on date:

The NDPP has grown to 41, the BJP to 13, and combined, the NDA which had 30 seats in 2018, now commands the loyalty of 54 members in a house of 60. Note also, that the representation of smaller parties has been slashed to nil by Rio’s revenge.

Therefore, we may infer that the forthcoming contest in Nagaland will primarily be a bipolar one between an invigorated NDA and the tattered remains of Zeliang’s NPF. The Congress is not in the picture, and may, at best, win the odd seat here or there – if that.

The logical conclusion is that the outcome of the assembly elections in Nagaland has been broadly determined well before the first vote is cast. The higher probability is that Neiphiu Rio, the NDPP, and the BJP will be returned to the state treasury benches with an enhanced mandate. And the irony is that it needn’t have come to this.

If only Zeliang had tempered his ambitions and not triggered a butterfly effect, by recklessly breaking with the BJP in 2018, he might have won a second term in 2023. And Rio would still have been in the Lok Sabha, both doing their bit to improve conditions in Nagaland by taking advantage of the change which has swept across India since 2014. If only…

Be that as it may, the past is the past; the point of this piece is that every corner of this new India has a story to tell. The trick is to listen carefully.