Pathankot: Post-Operation Analysis Required But Failures Have Been Exaggerated 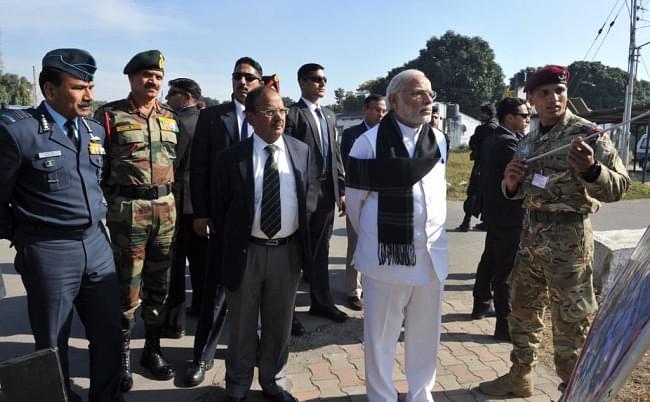 When turbulent events involving terror attacks occur there are various ways of examining them. The immediate response is inevitably emotional. Lives lost and glitches which get exaggerated generate negative reactions even as patience starts running out on the time taken to eliminate the terrorists. In the gory world of terror and counter-terror, operations seldom pan out as envisaged, both on the part of terrorists and security forces.

The unpredictability factor in such situations is the highest in the entire spectrum of violence. It puts pressure on the establishment and leads to wild allegations. As the dust and storm settle, the second response comes; much more nuanced, mature and professional. The stance of observers is no longer from the ringside seat and utterances are with a much greater comparison.

Almost three weeks after terrorists struck at one of the most important Indian Air Force frontline bases, the time has come to forget the rhetoric, the political biases (mercifully only forced lip service statements in most cases) and the emotions and take professional stock. A stand-away look at the event and comparison with events world over will reveal that the terrorists failed to achieve their objectives.

Politically, the Indian Government response ensured that the peace process with Pakistan remains only temporarily on hold; it could have been completely abrogated under public pressure. It needed certain risk taking which the Government has decided to go along with. India’s international image as a nation of displayed patience, willing to walk the gauntlet, has only been enhanced, notwithstanding the flak it may have received internally. The optics appear to have worked in its favor thus far. Hereafter if the peace process breaks down it will be much more due to Pakistan’s intransigence and the inability of the civilian government to push its agenda. The only entity which will then emerge as the true villain of the peace will be the Pakistan Army.

When it comes to comparisons, similar attempts at destruction of military assets by terrorists have succeeded to a great extent. The Sri Lankans lost 26 aircraft, including three Airbuses in the 24 July, 2001, LTTE attack on Katunayake air base north of Colombo. 14 LTTE terrorists and six Air Force men died in the five-hour attack which set the Sri Lankan economy back by 1.4 percent and tourism fell 15 percent that year giving the LTTE a strategic victory.

The Pakistan Armed Forces have suffered a series of raids and attacks on their bases, facilities, and cantonments with the Mehran naval aviation base and the Kamra composite facility suffering extensive damage to assets. In fact, at Mehran, the Pakistan Navy suffered the loss of two P3C Orion aircraft. The most high profile attack on any Pakistan Armed Forces establishment was that at Peshawar Cantonment when the Army School was targeted on 16 December, 2014, in which approximately 140 persons, mostly young children, lost their lives. Terror groups managed to achieve all their objectives in these actions.

Much against the above, the terrorists’ intent of targeting aircraft within hangars, ATC and maintenance facilities, command and control infrastructure and most importantly the very large civilian population within Pathankot airbase, could not be achieved. The quantum of explosives and ammunition that they brought with them confirms the comprehensive nature of their mission. None of the objectives could be met. The aircraft had been moved out of the base.

Even though penetration by terrorists into the base was achieved, the quick retrieval of initiative by the security elements by containing them to a segment of the base after initial losses must be counted as a major success. Pathankot had Mig 29 aircraft and Mi 25 helicopter gunships, both expensive and crucial aviation assets of the Air Force. Both were saved. Not a civilian lost his life and there was no hostage crisis. The unfortunate loss of six lives of soldiers and airmen and subsequent death of an officer of the bomb disposal squad was due to a temporary phase in the operation when the terrorists achieved momentary surprise. In such operations, there will be many moments when initiative is lost and has to be regained with greater deliberation.

The stamp of doubt about the success of the Pathankot counter-terror operation has also been spoken of due to the fact that it took an elongated time to complete. When one examines the nature of targets and the fact that the 2700 acres of land within the 27 kilometers boundary wall had to be painstakingly sanitized, the feasibility of even a single terrorist emerging 48 hours after declared success would have been a major setback.

Such operations cannot and must not be influenced by public or media pressure. The nation may have forgotten the Tanda incident of 22 July 2003, near Akhnur when due to the premature declaration of successful sanitization the Indian Army almost lost the top hierarchy of its Northern Command. A Brigadier was killed when a hidden terrorist emerged and lobbed a grenade on a group of senior officers during a post operation visit.

When it comes to an investigative analysis of the finer details of the military response, many faults will be noticed. There cannot be a doubt that the very nature of operation demands quick decision making which involves putting together of optimum military resources. To await the ideal response would take considerable time, a luxury unaffordable. The aim is to minimize the time while maximizing the effectiveness. In the process there are information voids through which decision making continues; everything is not based on Standard Operating Procedures (SOPs) which can at best be for appreciated situations and no two situations are ever similar in the world of counter terror operations.

In the bargain, the top functionaries met early enough, did not deliberate too long, decisions were taken and resources mobilized. The nit-picking on the choice of forces and the command and control of the operation is an issue for military professionals to deliberate upon in post-operation analysis. Even I had and continue to have my reservations on various decisions but these are professional differences of opinion which must also emerge as military/security operations have hundreds of ways of accomplishment. I do appreciate the time constraints and information voids which the process underwent. It is more important to professionally undertake a surgical analysis with the events now well behind us and ensure consultative platforms to discuss and offer solutions. The Indian strategic and security community must put its head to this, curb turf-based opinion and offer the Government the best solutions for future contingencies which are obviously lurking around the corner.

I will be subsequently expressing an opinion on the professional aspects of the actual execution; that is in the realm of the operational and tactical domain. It must invite constructive critique on the basis of multiple experiences of many professionals. However, at the national strategic level almost three weeks after the event, it is becoming increasingly evident that some good and timely decisions were taken, resources mobilized and operations conducted to minimize potential damage. All these avoided a catastrophe which had the potential to not only breaking the talks but even taking India and Pakistan to war.