Telangana, Seemandhra and the BJP 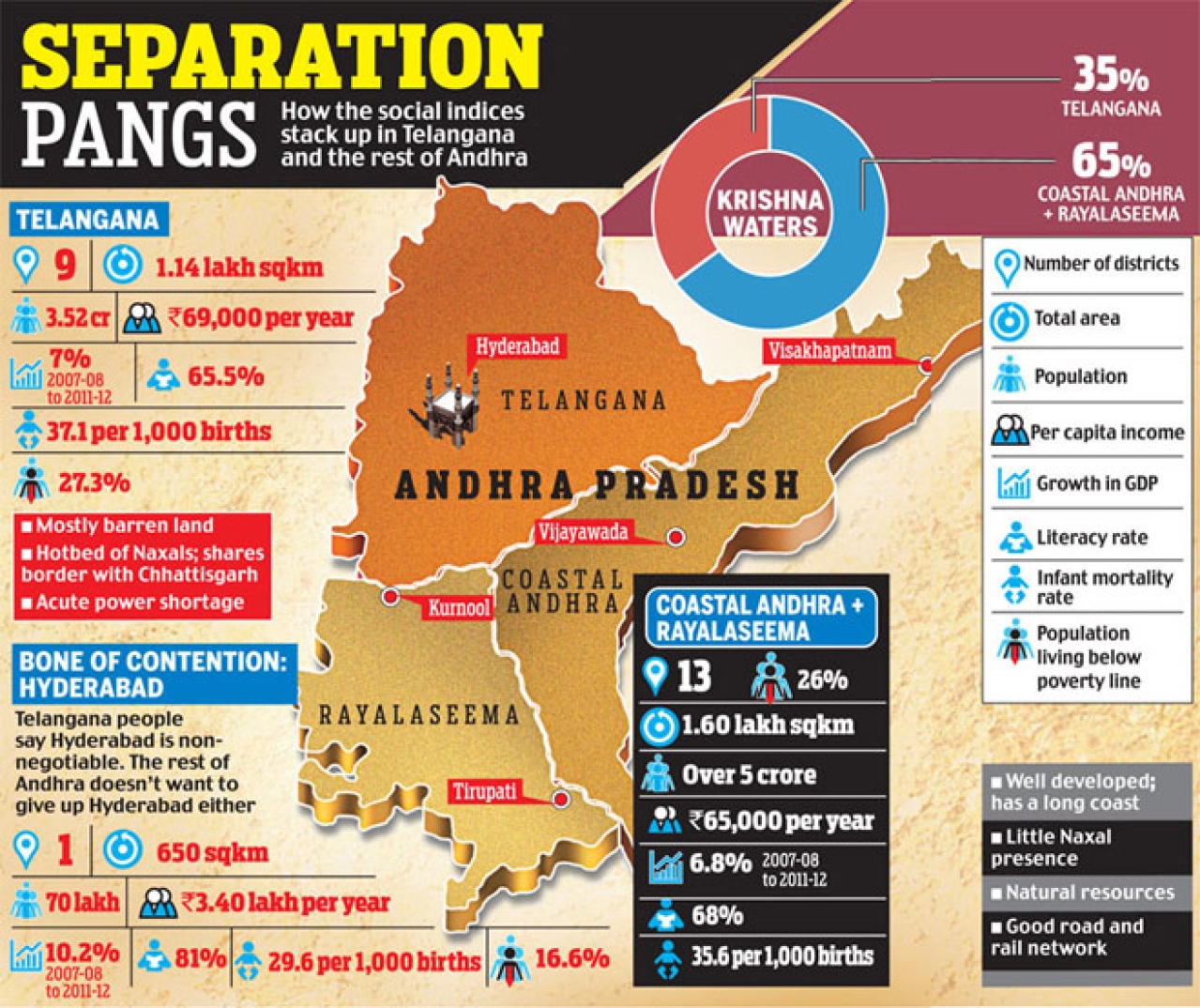 It seems that the expectations from the BJP are such that it can never win in either the eyes of the media or the unattainably high standards that its “supporters” set for it. Not so long ago (few days back actually), it was pilloried for being naive and blocking the Janlokpal Bill on the “minor” issue of procedures and giving AAP an emotive issue to milk for the Lok Sabha elections. On Telangana, it is being slammed for not “blocking” the bill because “constitutional” procedures were not followed. I mean, its damned if you do and damned if you don’t. Unfortunately politics in this country is a bit more complex than that.

OK, let’s rewind a bit on this whole Telangana issue.

The BJP has long been a supporter of the concept of smaller states and anyone who is a BJP supporter knows this. Specifically, BJP has espoused the cause of Telangana in its 2004 manifesto. Actually Vajpayee was keen on creating Telangana and Vidarbha along with the three states that were created, but was blocked by TDP and Shiv Sena, respectively. Congress has been playing footsie on the issue of Telangana, since 2004, and shamelessly so from 2009, when Chidambaram announced the formation of the state, and then backtracked. They have been resisting Telangana consistently and have now suddenly pulled the rabbit out of the hat. This is a deliberate ploy and no, it is not for the 17 seats of Telangana (it knows it can’t win more than 8-9 of these seats) and there is a likelihood that TRS might not merge with them after all in any case. They have created Telangana for a more sinister reason, and let’s try and see what that could be.

We have to step back further and take an even bigger view of the picture. Congress has accepted the fact that it has not only lost this election but will most probably get less than 100 seats on its own. They are not playing to win, but like in chess or in test cricket, they are playing for a draw (a smart move, which is what I would also do, if I were them). A “winning” draw for Congress would be if BJP gets less around 160-180, and they are able to support a “third front” of sorts from outside, even if for just 2 years, and then try and make a come-back. The current series of opinion polls, their own internal polls, as well as the crowds that Modi is attracting, have convinced them that BJP could be heading for 220+. A “losing” draw for Congress would be if BJP gets around 200, and if they are able to play on the ambitions of the “others” within BJP (let me not name them), as well as the parties likely to support the BJP, to keep Modi out and make anyone else the PM. The game that Congress is playing is called “Anyone-But-Modi” (ABM)!

Coming back to Telangana, since Congress realized that the TDP-BJP deal was done, and also that if they didn’t create Telangana, TRS would go with NDA (which they had already confirmed to BJP behind the scenes). This could have potentially added another 20-25 seats to the NDA, which they wanted to prevent at all costs. They took the call to create Telangana under any and all circumstances, even if they had to throw parliamentary proprieties and conventions out of the window! The day Congress took this decision, Telangana had already been formed, and today was just the formality of that decision. Congress played its cards well and presented BJP with a fait accompli, out of which BJP had no escape path.

The BJP had already publicly announced its support for Telangana. Unconfirmed reports were being floated that if BJP blocked the Bill, there would be violence unleashed on the streets, and BJP cadres would be targeted. Congress would have gone to town that they want to give the state but BJP was blocking it. TRS cadres had already started threatening BJP cadres. BJP had already burnt its fingers in the Delhi assembly by not supporting the JLP bill because AAP did not follow the procedures. Despite the bizarre black-out ordered by Meira Kumar, BJP had no option but to go with the Bill, as withdrawing would have been a big embarrassment.

So who are the gainers from this – in Telangana it’s the TRS (and the Congress, if the TRS agrees to merge, which I doubt very much). In Seemandhra it is the YSRC, for its “consistent stand” against the division. The Congress is not also beyond merging YSRC back into itself after the elections (at least so they think). The Kiran Reddy rebellion is a scripted drama by the Congress. The losers are BJP in Telangana (it anyway had zero presence in Seemandhra) and TDP in Seemandhra! Both impact the NDA negatively.

So for now, well played Congress! BJP, hard luck at least for this time.

However, when people try and be too clever by half, nature has a way of hitting back. Here is what I think is likely to happen. Congress will do what it needs to do and get it passed in the Rajya Sabha also. Arun Jaitley might be able to get a good debate, but the Bill will get passed. This is where the troubles will start. Someone is going to take this to the Supreme Court, as this bill is “bad in law”. No two states can have the same Capital, unless it’s a Union Territory. Law & Order for a region (Hyderabad) cannot be handed over to the Governor (without a constitutional amendment). The SC will strike it down! We will be back to square one, and by the time this happens, Narendra Modi would be the PM. It will be his problem to handle, afresh.

I have a message for the people of Telangana and Seemandhra. You are both aware that Congress has played cynical politics with you, especially over the past 10 years. It has allowed 1000 Telanganites to commit suicide (what a waste of young lives), and it has not addressed the genuine concerns of the people of Seemandhra. There is only one leader who had the guts to stand in the middle of Hyderabad City and ask the crowds to cheer “Jai Telangana; Jai Seemandhra”!!! Both these states have a very difficult and arduous journey ahead, and Congress has left you both poorer than what you started off with. There are water-sharing issues to be addressed, a new Capital for Seemandhra (Vijayawada is the best bet in my opinion), revenue uncertainty for Seemandhra, etc. BJP is the only party which can help you do this.

The choice in front of you is whether you want to go down the path of Jharkhand (an almost failed state), or Chhattisgarh, a state that is growing fast. The Congress (and TRS and YSRC) will make you a much worse version of Jharkhand! The BJP can take you down the path of progress.