A Conversation With Jogati Manjamma, Who Protected President Of Indian Republic From 'Evil Eye' 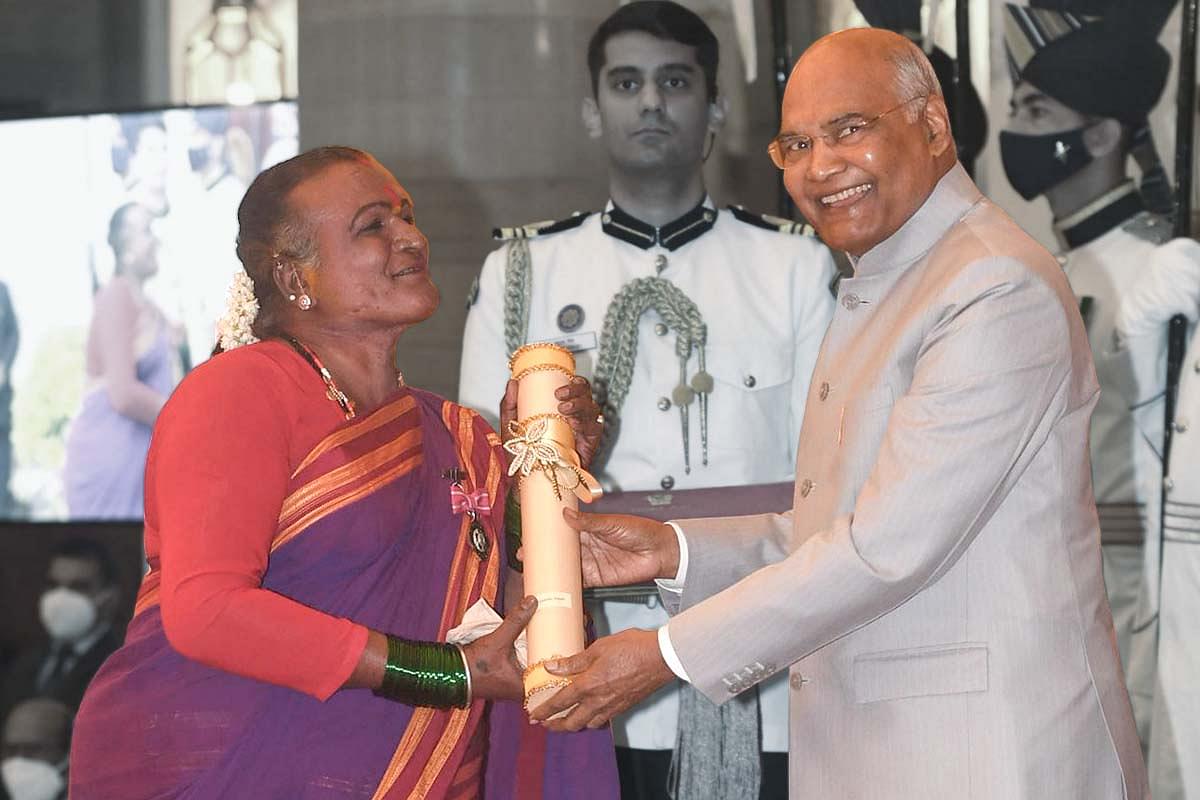 Hundreds of wonderful awardees from across the nation have been conferred the Padma awards in the last two days. President Ramnath Kovind has been gracefully pinning each one with the medals and handing over the certificates while receiving various forms of greetings from the recipients.

But one unique gesture that had him break into a wide smile while the audience roared in applause was that of transgender folk artist Jogati Manjamma‘s act of waving her saree pallu thrice, her hands as if drawing a circle then breaking knuckles on the floor with a large smile before the President could pin the medal on her. Or as those who belong to this culture call it - ’taking off Drishti’ or ‘warding away any evil eye’. In spiritual terms, it is the act of ‘cleansing the aura of a person’.

The applause that echoed through the prestigious venue was testimony to its appeal and relatability across the cultural spectrum of people who had gathered there. The video took internet too by storm and garnered millions of views in a matter of hours.

Oblivious to all the hullabaloo around it, Manjamma in her characteristic simplicity says, "That’s what our culture has given us. It is a ritual and an inheritance. That’s how we mark any auspicious function and ’bless people’ in Uttara Karnataka".

"If a Jogati awwa takes Drishti like that and breaks her knuckles it is a belief that the person’s future will be well, that’s tradition. Whoever takes us to their homes they ask us to do this and bless the kids or anyone who has any issues. This is not superstition, this is belief backed tradition” says Manjamma, who is also the President of Karnataka Janapada Academy - and the first transgender artist to hold the post.

"Manassinante Mahadeva (God is as our heart is), it was your belief that you will meet me that you walked in without thinking twice. If you had even an ounce of doubt, this meeting would not have happened. So have trust," she advises me, saying it is in this faith that rests the divine.

Manjamma had bowed down and worshipped the stage before she could step onto it. "That’s because that’s the platform that earned me both my bread and butter and this name, national recognition and award. It is the stage that created an opportunity for me to go stand and receive an award from the first citizen of the country for which I have to be eternally indebted,” she explains, adding that it is also to seek forgiveness for stepping on her and standing there.

Recounting her meeting with Prime Minister Narendra Modi and smiling about her broken Hindi interaction, she says, “He asked ‘Kaisi hain?’ (how are you?), I said Achi hun (I'm good), then he asked if I perform alone or have been teaching others ‘I said das bees mere admi seekha hai (I have taught 10-20 people)…in whatever Hindi I managed then said university girls boys seekha hai (I have taught university girls and boys)…good, good acha shukriya he said and left”.

"E Kashta nanage kone aagli. Nanu pattiro kashta Yarigu barade irli…yenidru nanage barli" (May this struggle end with me, let no one else have to go through what I have…let all of it come to me) she says, adding that she wondered the same when Kannada superstar Puneet Rajkumar passed away. "I have no one in the closest circle who I would be abandoning - no husband, children or anyone who would be grief-struck. Why, then, couldn’t God take me instead?" she asks as she breaks down.

Responding to views about certain transgender activists on her act of ‘removing Drishti as one that reduces their identity to just that’ Manjamma clarifies, "I haven’t got where I am because of my activism. I have got here because of my ‘janapada sanskriti’ my folk tradition - that’s the one that has brought me from my village to Delhi and the Rashtrapati Bhavan. How then can I abandon it for activism?,” she asks unapologetically.

In contrast, she has been receiving a host of calls thanking her for doing what she did at that forum and that she has represented the entire community and its cultural heritage by the act.

“For those who are involved with only activism, they see these acts as superstitious for they wish to live minus the culture and tradition and only seek rights and recognition. For me, activism and culture go hand in hand,” she explains.

A government that has given me so much, should take this ahead and provide employment, education and opportunities for our community. There are some who drop out of schools and go for sex work or begging - they should be rehabilitated and provided an opportunity for a respectable life - with an identity card, an Aadhar card, a house and a ration card maybe, she seeks.

For those who can no longer earn, an old age home or care centre should be provided, she advises - this is my activism. I have been seeking, but those who wish to only see my yesterdays act through the lens of superstition, why don’t they focus on my positive actions instead, she asks.

Activism, for her, has not been an act or a phase but a lifetime of struggle, strife and seeking a space for transgender folk artists. She was the first to take the dance form of Jogati Nritya which was restricted to being performed at fairs and festivals on temples and gatherings as an art form of its own and get its due recognition.

The plays, the songs have all been passed on by rote and from one generation to the next, with a Guru initiating the next Jogati to recite their lines. “Those who can't read would be woken up at daybreak and told their lines and taught to get them byheart,” says Jogati amma whose first ‘paatra’ was that of Kamadhenu in Bannimahakali Kamadhenu play.

Reselling her first lines, she narrates the tale of Kartivirarjuna, Yellamma and the Banni tree where Kartaviryarjuna instructs the Banni tree to keep Kamadhenu captive until he wakes up, failing which he threatens to chop off her roots and burn her down and wear the ash on his forehead and leave.

Manjamma’s eyes well up and her voice chokes with emotion as she recites the lines, that Kamadhenu pleads to the tree saying:

Those were the first lines she recited when the dance form was just performed in between the plays and ritualistic setups. But Manjamma’s performance at Davanagere at a police function, where her throat parched up, seeing the hundreds of ‘Khaki’ bearers who she feared since childhood was the first that marked the beginning of her stellar performance.

From then there has been no looking back, with her having performed with multiple troops at countless platforms, even opened the pursuit of the art to non-transgenders and non-Jogatis and anyone who wishes to learn it.

“We now run training programmes, have formed many teams of Jogatis, many of whom now go train other theatre practitioners,” says Manjamma who pioneered the transition of Jogati Nritya from a ritual performed only by transgender’s who were initiated as Jogatis to a valid art form that can be pursued by one who wishes to.

This recognition, respect and award, hasn’t come easy for Manjamma, as her autobiography ‘Naduve Suliva Hennu‘ recounts. From being ridiculed and ’treated’ for being born as Manjunath Shetty but aspiring to be a woman, from being disowned by parents and taking to the streets, from being raped by multiple men as she was hunting for answers to life’s questions to deciding to die just before her life’s calling found her by a street side in the form of Jogati Nritya, Jogati‘s tale is a fable.

A fable whose latter halves are now, thanks to a changing cultural narrative in the nation, finding recognition she hadn’t ever fathomed. From begging on the streets after a, fortunately, failed suicide attempt to being initiated to the Jogati Nritya bearing the divine on her head and dancing as a devotee of Yelamma to being a cultural brand ambassador and last year being appointed the President of the Karnataka Janapada Academy, the first transgender to hone such a post in public office, Jogati has carved a niche for not just herself but the entire spectrum of diversity.

She has taken Jogati Nritya to platforms across the nation and was awarded the Karnataka Rajyotsava Award in 2010. Her life is part of school lessons in the state and part of the syllabus of the Karnataka Folk University.

It would be impossible to sum up her journey or even my interaction with her in a single article. For she has many ideas for the betterment of the community and the culture associated with it, she wishes for the betterment of various folk forms that receive hardly any attention and funds, she has gone countless miles, but has many more to go she assures.

“This is an award for my entire community - be it transgenders, folk artists or Kannadigas - this is for all of them”. May this recognition only lead to further promotion of forms like ours” she wishes. Thathasthu, to that thought.