A Goddess Beyond Access: The Sharada Peetha That Lies Across The LoC 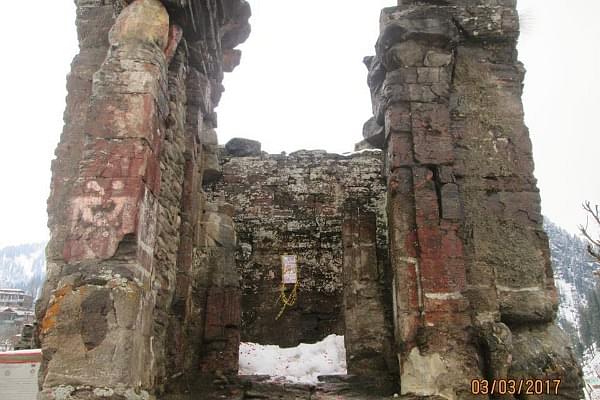 Sharada Peetha with a photo of Mata Sharada, installed by civil society members of Pakistan-occupied Kashmir inside the temple. (Photo: Ravinder Pandita)

This chant echoed in my mind as I watched the visarjan (submergence ritual) proceedings of the Sharada murti (statue) that was consecrated and worshipped for five days during Sharada Navaratri in Mangaluru. Everyone who witnesses her journey ‘back to her abode’ is emotional as she is gradually, inch by inch, immersed in the lake with farewell chants of Sharada Mata ki Jai, Bharat Mata ki Jai.

But as this “Kashmirapura vasini” left, I wondered, what about her home on her land, Kashmirapura. My recent visits to Kashmir did hurt me to see the state of certain heritage structures that were once living temples. But I hadn’t met this goddess of learning there. Not because I didn’t want to, but because none of us who would want to, could. For, her place, the Sharada Peetha, the seat of learning, lies in what is today Pakistan-occupied Kashmir. And the last time someone undertook a yatra (pilgrimage) to the shrine was in 1948 when Swami Nand Lal, a sage from Kashmir, who initially had his ashram at Sharda town visited it. He had to move his ashram from Sharda to Tikker village after the partition, and is said to have also brought with him some idols, which are said to be found even now at Devibal at Baramulla.

Sharada Peetha’s Wikipedia entry tells you the grim reality. It “is an abandoned Hindu temple and ancient centre of learning along the Neelam River in the village of Sharda...”. This is because no one has been able to visit the shrine post-partition.

Efforts to revive the pilgrimage to this centre, however, have stayed on. It has been three years now since a group of civilians from Kashmir formed a group, the Save Sharda Committee Kashmir, founded and headed by Ravinder Pandita, has been seeking access to the shrine. Last week, yet again, they approached the Ministry of Home Affairs for it. They want special permits to be issued to Hindu pilgrims for using the cross-Line of Control (LoC) bus to visit the ancient shrine.

The committee has been relentless in its pursuit of late for access to this shrine, which it sees as part of the larger dream of “reestablishing Sharda desh, of which only Jammu and Kashmir is left today”.

The committee also met the Minister of State Jitendra Singh last week and apprised him about their demand. “We have again submitted our request for a special permit so that Hindu and Sikhs can use the LoC bus to visit their respective religious places in the PoK. The Ministry of External Affairs will also be approached so that they can again take up the issue with their counterparts in Pakistan,” said Pandita, as quoted by The Tribune.

@rajnathsingh On J&K Accession day time to remember and press for Re-opening of Sharda Peeth in PoK . We have got flowers laid, Photo installed by civil society of PoK & now SC PoK order too. Amendments in LoC permit needed to incl. pilgrimages also apart from meeting relatives. pic.twitter.com/NpK1e8dPZa

The committee has been making efforts to create awareness about this shrine, which was an important centre of learning of yore. They had even requested the civil society in Pakistan-occupied Kashmir to offer flowers at the shrine on the occasion of Sharda Day, which they did, and sent the flowers back to the committee.

The committee then took these flowers to various mutts and congregations of Kashmiris across the nation to spread awareness about the shrine.

Civil society of PoK is cooperative. I had requested them to go to Sharda Peeth on Sharda Divas and they did so and sent me these videos after laying flowers there. Save Sharda Committee Kashmir (R) thanks them again ! Jai Sharda pic.twitter.com/YFoGqEW366

The Shrine of Sharada

This shrine is about 207 kilometres north of Muzaffarabad in Pakistan-occupied Kashmir and is located near a picturesque confluence of the Kishanganga River (Neelum River) and the Madhumati stream. It is surrounded by snow-clad peaks of the Sharda and Narda hills of the Nanga Parbat range.

There are records by historians across centuries who have mentioned this Kashmir shrine. Rajatarangini, one of the earliest works on Kashmir by Kalhana, refers to the shrine of Sharada. Written in the twelfth century, this ancient Sanskrit literary work chronicling the history of Kashmir, documents its location and territory. As Pandita says, historian Belhana in the Vikrama Chiriter attributed all his knowledge to the goddess “whose crown was formed with the glittering gold collected from the river Madhumati”. The Sharada script is said to be linked to the language that was once spoken by the locals. Author Sasisekhara Toshakhani, in Rites and Rituals of Kashmiri Brahmins, mentions the Sharada Temple, which has the “image of Sharada mounted on the lion instead of the traditional swan”.

It was also said to be an important Buddhist centre of learning. Emperor Kanishka is said to have held a Buddhist council here. And at this university, it is believed the Sharada script took form and was instrumental in the spread of Buddhism in the region.

It is beyond the scope of this article to list out all that has been said about the shrine, whether in mythology or history. But it sure could serve as a starting point for all those who worshipped the goddess of wisdom last week to support the ones who are doing all they can to reinstate this shrine and restart routine pilgrimage.

The committee has managed to garner support from people in both countries. The Supreme Court of the Pakistan-occupied Kashmir turned Pandita’s letter into a petition and earlier this year directed its government to protect the shrine. Organisations like the Bharata Punarutthana Trust and the Sringeri and Dwaraka Shankaracharya Mutts on this side of the border have also recently expressed their support and sought the intervention of the Indian government in the matter.

On the occasion of the day of accession of Jammu and Kashmir to the state of India, Pandita wishes that their dream of having uninhibited access to worship the goddess of learning at one of the oldest shrines comes true.


This article is part of Swarajya’s series on Indic heritage. If you liked this article and would like us to do more such ones, consider being a sponsor – you can contribute as little as Rs 2,999. Read more here.