A Sanskrit Film On Gender Equality And Oppression? Yes, There Is One 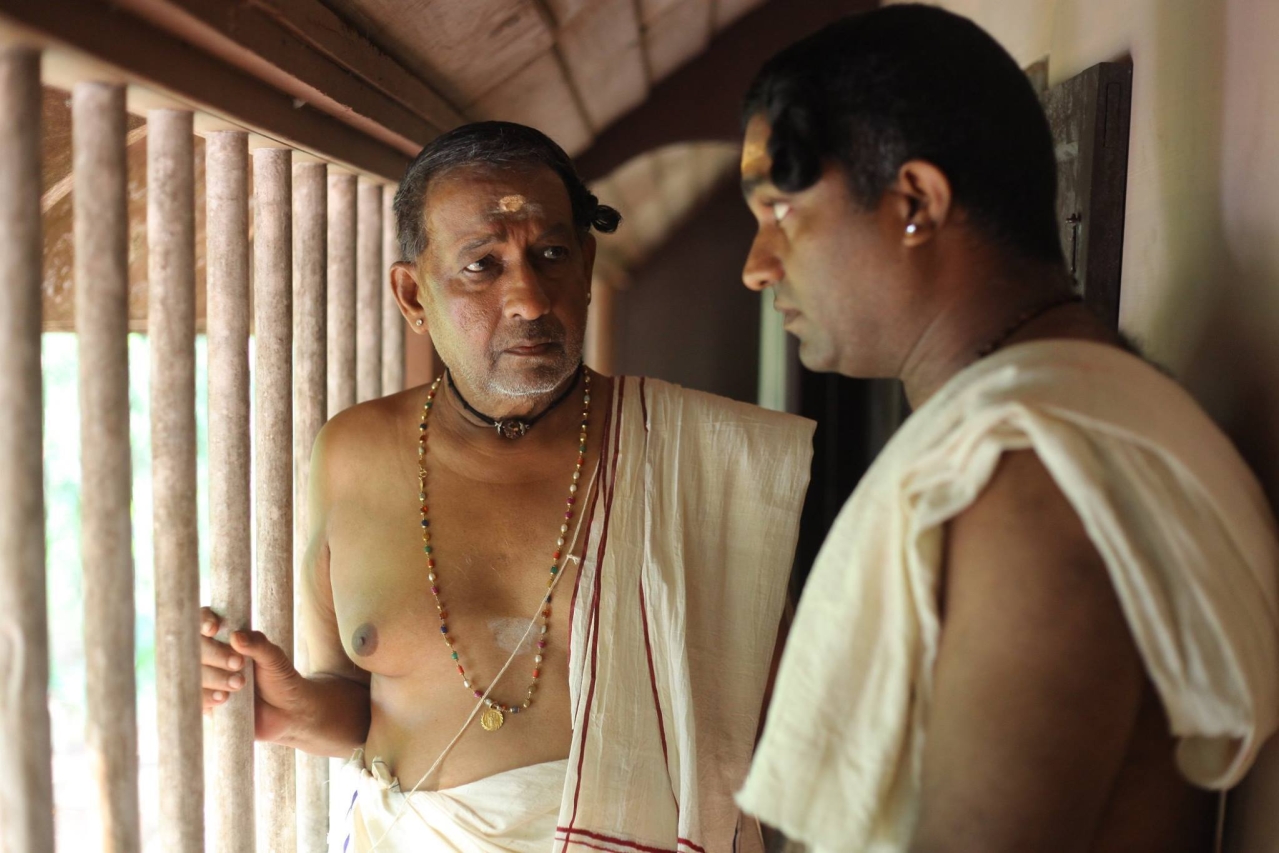 Ishti, meaning search for self, set in the 1930s, explores a theme relevant even today. Director G Prabha says, “Ishti is basically a woman-oriented narrative. It discusses oppression and gender equality while recreating another timeline and milieu.” The hero, in Ishti, is a 71 year old Namboodiri. Prabha says, “Ishti is inspired by V T Bhattathiripad’s reformist movement and it is the first Sanskrit film to deal with a socially relevant subject.” Ramavikraman’s role is played by Nedumudi Venu. He is guarding the fire for his own funeral pyre. “A renowned scholar, he has conducted Somayaga and as the Yajamanan he has to keep the fire taken out the yaga at three fireplaces inside his home. He has to do poojas and offerings thrice a day and protect the fire from extinguishing,” adds Prabha.

His third bride is literate. Her stepping into the household brings change. Sridevi, the new bride teaches her stepson to read and write. Raman, the step son, who is nearly a decade older, meets a girl from another caste. He tells Sridevi that he is teased by the girl. He is illiterate. She introduces him to the world of letters. A stir. More change follows. Sridevi is summoned for “smarthavicaharam”, a ritualistic trial.

Ishti is the fourth film in Sanskrit. Prabha adds, “All the other three films made in Sanskrit are on mythological themes or are biopics. But Sanskrit can be used to tell other stories also based on social themes.”

G Prabha is a retired professor. He has taught at Chennai’s Loyola College. Ishti is his first feature film. He says, “I am a writer and a teacher, so I don’t understand the market and commercial success.” Prabha has made two documentary films. His earlier works include Agnaye and Akkitham. He says, “(In Ishti) I’m simply showing the evil practices of society in the past. Even during those days, there were progressive Namboothiris.”

Prabha, a professor of Sanskrit, wanted to make a film in the “mother of languages”. “Since it’s not a very common language, I went for a time and community where it looks natural,” he adds. The director plans to make more films in Sanskrit. He adds, “Even now it is not a dead language because there are people, even if new, who still speak Sanskrit like me and my family. And it is a myth that Sanskrit was the language only of the Brahmins. In Kerala, even the Dalits use it.”

A Sanskrit feature film inaugurated IFFI’s Indian Panorama for the second consecutive year. “The emphasis, (in Ishti) is more on the visuals and the traditional practices, instead of long complicated dialogues, which the audience can understand via English subtitles,” adds Prabha. A Sanskrit film, Adi Shankaracharya, was made in the 1980s. “Sanskrit isn’t dead, as many people think. I’ve always wanted to make a Sanskrit film, if only to show that the language needn’t just be used only for biographical films,” he says.

Prabha found actor Nedumudi Venu who had done a couple of Sanskrit plays earlier in his career. The search for producers was tough. The director spent several months trying to convince producers. Failing to find producers to finance his film, he started the shoot on his small savings. Some donations from friends helped. Ishti was shot in 17 days in Piravom, Ernakulum. Will a film in Sanskrit find distributors? He adds, “One cannot expect the distributors and theatre-owners to show confidence in releasing a Sanskrit movie, but I am glad that the movie is appreciated by select audience at the film festivals.”

The film was a contender for the National Awards, but ultimately lost out to Priyamanasam, the only other Sanskrit film. Prabha has sent the film to various film festivals, hoping it generates some interest, and distributors take it seriously. Ishti opened the Indian Panorama at the International Film Festival of India this year.