A Vedic Touch To Logic In Indian Thought - Part Two 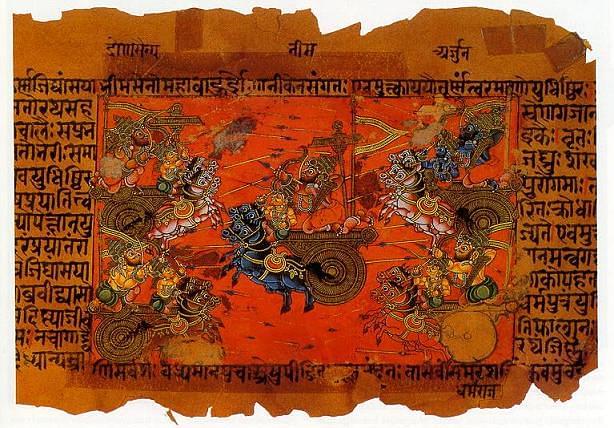 The battle of Kurukshetra, folio from the Mahabharata. (Wikimedia Commons)

The Nyāya propositions assume a dichotomy between object and subject. The objective world is open to logical analysis since it maps to linguistic categories; the subjective world can suffer from invalid perception for a variety of reasons. This is consistent with the Vedic view that although the inner world maps the outer, the mind can be clouded by habits or wrong deductions owing to incorrect assumptions.

The Sāmkhya [13], attributed to the legendary rishi Kapila, is the background to be considered when speaking of Indian logic. Its concern is the enumeration of categories as they arise in the space of the mind with the objective of obtaining discriminative knowledge of the manifest (vyakta), the unmanifest (avyakta) and the knower (purusa). In Sāmkhya, evolution occurs due to changing balance and proportion both in the objective and the subjective worlds. The three gunas or fundamental modalities are sattva, tamas and rajas, and they operate both at the large scale as well as in quick transformation. The normative “thing” behind this ceaseless change is the witness, or self, who is viewed in the singular for the entire universe.

At the objective level, tamas is inertia, rajas is action or transformation and sattva is the relative balance or equilibrium between tamas and rajas. The interplay between the three sets up oscillations in the objective and the mental levels. In Yoga, the objective is to achieve the cessation of the fluctuations of the mind.

Consciousness or pure awareness is by definition not an object and therefore it does not have attributes. It must for the same reason be beyond the categories of the living or dead. It must be beyond inertia, change or fluctuations. It is extraordinary that in this analysis the qualities that are associated with objects become describable by an internal order.

The gunas do not admit of any further breakdown. This defines a position that is different from that of Aristotelian physics [14]. The three gunas are present in all objects and we can isolate one only in terms of the momentary strength of one in relation to the other in a process. Their fluctuations mark the universal “internal clock” of worldly processes.

4. The form of the Nyāya syllogism

The five parts of the Nyāya syllogism spring from the idea of bandhu that is fundamental to Vedic thought. The bandhu is the equivalence between two different systems, which ordinarily are the microworld, the macroworld and the individual’s cognitive system [5].

The Nyāya syllogism first sets up the propositional system with its two components (two parts) and then identifies another well-known system to which the first is supposed to have a bandhu-like relationship (third and fourth parts). The conclusion (fifth part) can be made only after the preliminaries have been formally defined.

The appeal to the bandhu in the syllogism is to acknowledge the agency of the subject who can be, without such knowledge, open to invalid perception. One can see how in systems that do not accept transcendental reality (such as Aristotle’s or Buddhist), a simplification from the five-part to the three-part syllogism would be most natural.

This school of “individual characteristic” is supposed to have been founded by Kanāda, the son of Ulūka [15],16]. Vaiśesika Sūtras describe a system of physics and metaphysics. Its physics is an atomic theory of nature, where the atoms are distinct from the soul, of which they are the instruments. Each element has individual characteristics (viśesas), which distinguish it from the other non-atomic substances (dravyas): time, space, soul and mind. The atoms are considered to be eternal. There are six fundamental categories (padārtha) associated with reality: substance (dravya), quality (guna), motion (karman), universal (sāmānya), particularity (viśesa) and inherence (samavāya). The first three of these have a real objective existence and the last three are products of intellectual discrimination. Each of these categories is further subdivided as follows.

There are nine classes of substances, some of which are non-atomic, some atomic, and others all-pervasive. The non-atomic ground is provided by the three substances, ether (ākāśa), space (diś) and time (kāla), which are unitary and indestructible; a further four, earth (prthivā), water (āpas), fire (tejas) and air (vāyu) are atomic composed of indivisible and indestructible atoms (anu, paramānu); self (ātman), which is the eighth, is omnipresent and eternal; and, lastly, the ninth, is the mind (manas), which is also eternal but of atomic dimensions, that is, infinitely small.

Remoteness and nearness are interpreted in two different ways: temporally or spatially. This list is not taken to be comprehensive because later sound is also described as a quality. But there is a fundamental difference between sound and light. Sound is carried by the non-atomic ākāśa, whereas light, implied by rūpa, is carried by tejas atoms. But even sound is sometimes seen as a specific characteristic of atoms. There are five different types of motion (karman) that are associated with material particles or the organs of the mind: ejection, falling (attraction), contraction, expansion and composite motion.

Universals (sāmānya) are recurrent generic properties in substances, qualities, and motions. Particularities reside exclusively in the eternal, non-composite substances, that is, in the individual atoms, souls, and minds, and in the unitary substances ether, space and time. Inherence (samavāya) is the relationship between entities that occur at the same time. This provides the binding that we see in the various categories so that we are able to synthesise our experience.

In the medieval period, Dignāga (c. 500 CE) argued that inference is a function of three terms: the property to be inferred (sādhya), the inferential mark (sādhana) and the locus (paksa). Kumārila Bhatta (c. 700 CE) argued that language can generate cognition of non-existent entities in what are empty terms (such as “horned rabbit” or the “son of a barren woman”). Udayana (tenth century) refuted the Buddhist view of the momentariness of all entities.

In the thirteenth century, the Navya Nyāya (New Logic) system was founded by Gangeśa Upādhyāya of Mithilā [17],[18],[19]. Its development was influenced by the work of earlier philosophers Vācaspati Miśra (tenth century) and Udayana. It developed a highly technical language to formulate and solve problems in logic and epistemology.

A property with an empty domain was taken to be fictitious or unreal and non-negatable. Negation was considered a valid operation only on real properties. This could be considered to generate a three-valued table. If P, N and U represent “positive”, “negative” and “unnegatable”, then we have the truth table [12]:

Knowledge was taken to be analysed into three kinds of epistemological entities in their interrelations: “qualifier” (prakāra); “qualificand”, or that which must be qualified (viśesya); and “relatedness” (samsarga). For each of these was the corresponding abstract entity: qualifierness, qualificandness and relatedness. The knowledge expressed by the judgment “This is a red flower” was then analysed in the following sense: “The knowledge that has a qualificandness in what is denoted by this is conditioned by a qualifierness in red and conditioned by another qualifierness in flowerness.”

Various relations were introduced, such as direct and indirect temporal relations, paryāpti relation (in which a property resides in sets rather than in individual members of those sets), svarūpa relation (which holds, for example, between an absence and its locus) and relation between the cognition of a knowledge and its object.

The concept of “limiterness” (avacchedakatā) was put to many different uses. If a field has fire in one region and not in another, the Navya Nyāya proposition would be expressed as: “The field, as limited by the region A, possesses fire, but as limited by the region ¬A possesses the absence of fire.” In the manner, limitations of time, property and relation were also described.

The notion of negation was developed beyond specifying it with references to its limiting counter-positive (pratiyogin), limiting relation and limiting locus.

The important role that logic has enjoyed in the Indian cultural area is due to belief in the overarching Vedic system that knowledge is of two kinds: objective and subjective. All objective knowledge is governed by logic, whereas the knowledge related to the experiencing subject is extra-logical or transcendent. Since ordinary science must be objective, logic is essential in all philosophy and scientific disciplines.

The philosophical systems of the Nyāya and the Vaiśesika, together with the philosophical school related to grammar, kept up a continuing debate over centuries that led to the consideration of several subtle problems. The culmination of the Indian logical tradition was in the Navya Nyāya school.

[19] B K Matilal, The Word and the World. India’s Contribution to the Study of Language. Oxford: Oxford University Press, 1990.

A Vedic Touch To Logic In Indian Thought - Part One