All Roads Begin From The Gwalior Gharana 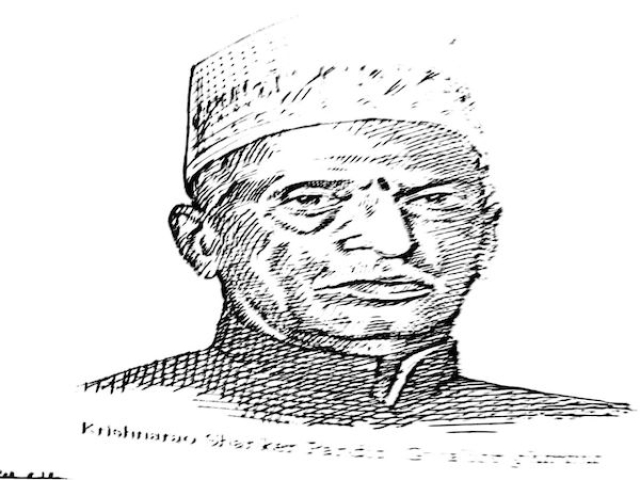 When it comes to Hindustani classical music and various styles, ‘gharanas’, that evolved within it, there is one undeniable fact that it all began with the Gwalior Gharana. As I have mentioned in one of my earlier articles in this series, the current style of ‘khyal’ singing evolved from ‘dhrupad’, the norm earlier. The khyal used a systematic method of presenting music in an orderly form or sequence and became popular in the early 18th and 19th century. But who were the pioneers of khayal?

It is widely believed that Ustad Naththan Peer Buksh, son of Ustad Makhkhan Khan the qawwal, was instrumental in giving a distinct identity to this style and popularise it. Ustad Makhkhan Khan and his brother Ustad Shakkar Khan, both trained under Ustad Ghulam Rasool Khan (Lucknow), and were known as ‘qawwal bachchas’. While both trained under the same mentor, Shakkar Khan was also the son-in-law of Ghulam Rasool and was, naturally, the ‘favoured one’.

Sometime down the line, it is believed, a rivalry developed between the two disciples and they drifted apart. Subsequently, Makhkhan Khan bagged the position of Raj-Gayak at the Royal Court of Gwalior, a bigger and more respectable royalty of the time. While not much is known about Shakkar Khan’s journey here on, it is presumed that he died young and his son Ustad Bade Mohammed Khan carved a niche for himself and became the royal court singer at the court of Maharaja of Rewa. He was also destined to play an important role in the development of a distinct style known as Gwalior Gharana, but more about him later.

Naththan Peer Buksh followed in his father’s footsteps as the rajgayak at Gwalior Royal Court and became the teacher to Raja Daulat Rao Scindia, who was a connoisseur of music. Naththan Peer Buksh also taught his grandsons Haddu and Hassu Khan. The grandsons became extremely proficient in the new style that their grandfather taught them and the audiences, including royalty Raje Daulat Rao and Raje Jayaji Rao Scindia loved them immensely. The new style, based on simplicity of presentation, focused on simple and established raag-matrices so that the listener does not have to tax his brain recognising and connecting to the raag being presented.

The new style incorporated expansive treatment and ornamentation to bring out the ethos of the raag along with its nuances. The style also heavily depended on bandishes (compositions) that allowed such expansive treatment and were specifically composed and/or adapted from earlier dhrupad style to suit this new gayaki. Use of heavy gamaks, bol-alap, bol-taan and ‘sapat-taan’ (straight taan-pattern with notes following each other) and other intricate taan-patterns were the highlights of the new style popularised by Haddu Khan and Hassu Khan.

It was around this time that Ustad Bade Mohammed Khan made a visit to the Royal Court of Gwalior. He was, by now, famous for fast-paced bandishes and taan-patterns based on qawwali compositions. These pace-setting additions to the presentation became vastly popular and the raja of Gwalior was enamoured with them. He also wanted Haddu Khan and Hassu Khan to include these attractive elements in their style and enrich it further.

It has been said (nothing documented, just hearsay) that Haddu Khan and Hassu Khan, at the insistence of the raja of Gwalior, surreptitiously heard Bade Mohammed Khan’s riyaz for a considerable amount of time (it was and still is unethical and unthinkable during those times) and copied the taan-patterns and several compositions in their gayaki. Later, the raja hosted a grand concert in his presence and arranged a patch-up between Bade Mohammed Khan and the younger singers. Although Bade Mohammed Khan then taught Haddu Khan and Hassu Khan briefly, he never pardoned the raja of Gwalior and went back to the Rewa Royal Court.

Despite this slightly disconcerting event, it cannot be denied that Gwalior Gharana gayaki was the ultimate beneficiary as an outcome. Its repertoire was enriched by the faster-paced compositions and intricate-electrifying taan-patterns, hitherto missing in it. Ustad Haddu Khan and Hassu Khan went on to achieve fame and veneration across the music world and also trained a number of disciples who took this style throughout India.

A quick look at the luminaries who took to Gwalior style and spread across the length and breadth of India, practically gives us the ‘Who’s Who’ of Hindustani classical music. There was Pt Balkrishnabuwa Ichalkaranjikar (1849-1926) from Maharashtra who travelled to Gwalior to learn from the masters of the gharana the hard way, and came back to settle in Ichalkaranji near Kolhapur. His numerous disciples, viz Pt Vishnu Digambar Paluskar, Pt Anant Manohar (Antubuwa) Joshi, Mirashi-buwa played stellar roles in taking Hindustani classical music and specially Gwalior gayaki, across India.

Especially indefatigable were the efforts of Pt VD Paluskar, who institutionalised music teaching methodologies and created structured courseware making it easier for music students and teachers. He also founded the Akhil Bharatiya Gandharva Mahamandal in Lahore in 1901 and initiated a movement that is still going strong even after a century.

The next generation of Gwalior gharana artists also saw a number of illustrious names that have been iconic for music-lovers. Ustad Rehmat Ali Khan, Ustad Bade Inayat Khan, Pt Krishnarao Shankar Pandit, Pt Raja Bhaiyya Poochhwale, Pt Vinayakbuwa Patwardhan, Pt DV Paluskar, Pt Gururao Deshpande, Ustad Rajab Ali Khan, Ustad Sendhey Khan, Ustad Ghamman Khan, Ustad Fateh Ali Khan and many more such names can be heard in the anecdotal archives of music. Sadly, as has been repeatedly mentioned, this domain suffers from abysmal documentation and not much authentic data or life-stories are available about many of these artists.

Many of them have also never been recorded for posterity and the beauty of their singing can now only be read about. It was only an exceptionally articulate artist like Prof BR Deodhar, who not only did well academically (he was the only disciple of Pt VD Paluskar, who was allowed by the guru to complete matriculation and later a bachelor’s degree) but also wrote about it prolifically. His writings are one of the major sources for tracing the historical progression of Hindustani music of the times.

However, it is fortunate for music-lovers that almost everyone from this generation kept up the mission of spreading the Gwalior gharana tradition through teaching disciples. Pt DV Paluskar (son of illustrious Pt VD Paluskar) was an exceptional artist from this generation in that he was recorded frequently for All India Radio and private record labels and his recordings, even today, draw listeners to their posts on YouTube. Here’s his typically Gwalior gharana expansive Yaman-Kalyan.

By the turn of 19th century, the Gwalior gharana had given birth to some other musical styles such as Agra, Kirana, Jaipur and some others and classical music was in a renaissance mode, in a way.

The next-generation artists, such as, Pt Laxman K Pandit, Pt Kumar Gandharv, Vidushi Malini Rajurkar, Vidushi Veena Sahasrabuddhe, Pt Vinayak Torvi, Pt M Venkatesh Kumar are the modern and contemporary names that today’s generation is familiar with. All these artists, thanks to media exposure and explosion, better communication facilities and ease of travel across the globe, have been prolific performers. They have also recorded voluminously across audio-video mediums and are household names.

However, these same innovations of technology have also given rise to a new tradition of blending different gharana styles in an artist’s presentation.

Take, for example, Pt M Venkateshkumar as a representative case. Having trained under Late Pt Puttaraj Gawai (a Gwalior gharana senior from yesteryears), his style is primarily based on the Gwalior gayaki. However, having stayed at Dharwad almost all his life, he is bound to have an unmistakable flavour of Kirana gayaki because Hubli-Dharwad-Belgaum is the area where Kirana gayaki thrived most. Going a step still further, with Pt Venkatesh Kumarji’s penchant for electrifying taan-patterns, it is inevitable that his style incorporates some elements of Ustad Bade Ghulam Ali Khan’s Patiala Gharana gayaki. All this gives Venkatesh Kumar’s performance a distinct and genuine sparkle that is immensely appealing to listeners.

Since music is eternally dynamic and evolving with each passing year (emergence of various gharana styles from the original Gwalior style is a testimony enough to this evolution), this also is a welcome trend and may throw up newer, more exciting possibilities in future. For the moment, here’s a wonderful Maru-Bihag by Pt Venkatesh Kumar from a live concert in October 2015, where you can see the basic structure of his Gwalior gharana foundation along with the blending of Kirana-style influences and electrifying taan-patterns strongly reminiscent of Patiala gayaki:

However, there still are some artists who have kept the Gwalior purity intact and one of the noted names amongst them is Vidushi Malini Rajurkar. A prolific performer at various cities and forums the world over, she has always presented basic, simple-to-identify raag-matrices with a disciplined progression of sthayi-antara in vilambit laya (slow-tempo), aalapi, sargam, bol-tan, taan-patterns, bol-baant and drut-bandish (fast-tempo compositions) with splendid and imaginative ornamentation at every stage of the presentation.

On the other hand, Pt Kumar Gandharva, although steeped in Gwalior gayaki through his taleem with Prof BR Deodhar, had to adapt his style to suit his altered physical condition after he recovered from a serious pulmonary ailment. The shorter taan-patterns and a slightly higher tempo of the compositions he sang were the major departures from the basic Gwalior gayaki one sees in Kumarji’s presentation.

However, the musical genius that he was born with inspired him to take a fresh look at interpretations of a number of established raag-matrices and present a fresh view-point. No wonder musicologists and music-lovers are still debating whether Kumarji was a ‘conformist’ or a ‘break-away’ type of artist. Let’s stay away from the intellectual debate and enjoy a serene Raag Shree recorded by Kumarji about three decades back.

Even in today’s generation of younger artists, there are a number of vocalists who have their moorings in Gwalior gayaki, but have listened to other styles with an open mind and have inculcated nuances of other styles consciously in their art and made it better, richer. Here’s a brilliant example of Vijay Koparkar from Pune. He received taleem in Gwalior style for close to a dozen years. Later he received extensive taleem from Late Pt Vasantrao Deshpande and Pt Jitendra Abhisheki, both of whom sang a wonderful blend of several gharana-gayaki styles themselves. Vijay’s style today, although based on original Gwalior gharana, shines with intricate and electrifying taan-patterns and imaginative sargam from Vasantrao’s gayaki and a very incisive, analytical outlook to jod-raags and mishra-raags adopted from his stint with Pt Abhisheki. Here’s a delightful Raag Vachaspati from one of Vijay Koparkar’s ever-enjoyable concerts –

In the ever-changing, fluid world today, it can be said with certainty that any artist aspiring to become a Hindustani classical vocalist will imbibe the basics and nuances of Gwalior gayaki wherever he trains or whoever he receives taleem from. As the famous adage goes, “All Roads Lead to Rome”, we can suitably amend it and say “All Roads in Hindustani Music Begin from Gwalior…!”

Further on Hindustani music on Swarajya: