Ashadha Ekadashi And Warkaris: Where The Journey Is Literally The Destination 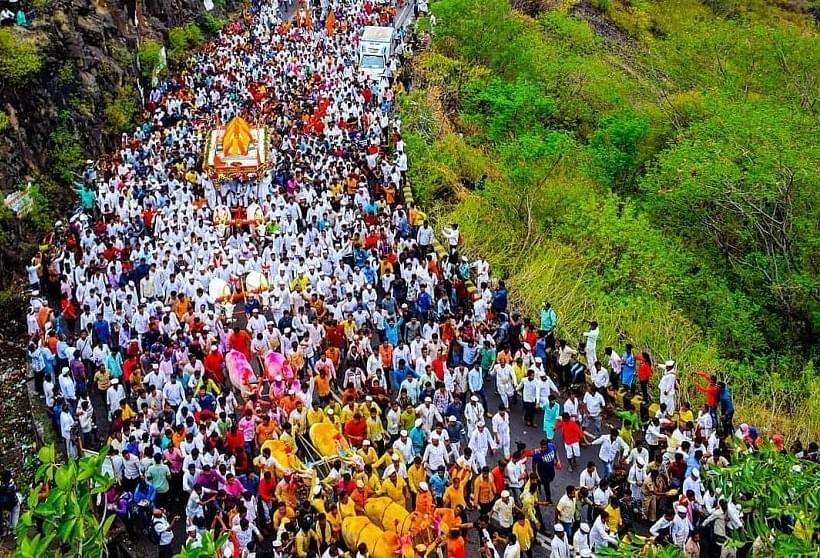 Warkaris on the way to Pandharpur (PC:@aadiyogi20/twitter)

For centuries now, this day is when all roads in Maharashtra lead to Pandharpur — a town on the banks of the river Chandrabhaga that is the destination for lakhs of devotees who walk for days together just to get there.

Yes, no ‘special darshan’, no ‘VIP passes’, no ‘special access’, not even a glimpse of their ‘Vithoba’ do they fuss about having.

Their Vithoba stands there with his hands on his waist. on a brick, because Pundalika, who was busy tending to his parents when his ‘ishta devata’ arrived, asked him to.

Their Vithobha is all the tales and legends, right from the Skanda Purana to the works of Shankaracharya, to Jnaneshwar, Muktabai, Bahina Bai and Tukaram, the potter Gora, the Haridasas of Karnataka, the Dalit saint Sant Chokhamela, Sant Narhari Sonar, who was a goldsmith and the founder of this sect Pundalika — they sing his praises, strum their ektaras, play their cymbals and dance in absolute abandon chanting ‘His name’.

For that’s all that matters.

The Warkaris perform the ‘wari’ or a pilgrimage with an entourage, a ‘dindi’, once a year to Pandharpur.

They walk through villages covering a few hundred kilometres, every village welcoming the dindis with refreshments and joining in the kirtan.

They ‘infect’ the regions with devotion and move ahead. The very essence of this sect or commune is non-discrimination — caste, gender, creed — nothing matters.

The cymbals dangle around the necks of most of them, the sandal paste tilak on their foreheads; come rain, sun or storm, they carry a palkhi with them, which carries a replica of Vithoba.

As described by Sant Jnaneshwar himself:

(The tilak of gopichandan on their forehead, the chain of tulasi beads around their neck, echoing with love and bliss, this brave sect of Vithala, who see Vithala Rakhumadevi as their parents and have decided to merge unto them in absolute dissolution).

From having connections to rulers from Karnataka, with a Hoysala King Vishnuvardhana having been instrumental in building a temple here, to its significance in bridging social fissures, the history, tales, sthalapuranas are many, while the research too has been immense.

But there is nothing more descriptive of his grandeur than the visual delight of watching the warkaris descend.

The feel is similar to the bees that throng the hive.

Their buzz is meditative.

Their asymmetric symmetry is mesmerising.

The most famous household abhang, Mazhe Mahera Pandhari, which to this day echoes in the voice of Pandit Bhimsen Joshi, is a lyrical visit to the land of Panduranga.

This composition of Sant Ekanath has the devotee referring to Pandharpur as his ‘maternal home’, deities Vitobha and Rakumai as his parents, Pundalik as his brother and the river Chandra Bhaga as a sister.

Not a comparison, but equally wonderful is this rendition of the outpouring of devotion in Shankar Mahadevan’s voice.

Each abhang exalts Vithoba as one among them and they all culminate in him at Pandharpur — an exalted conclusion of egalitarian bliss.

As the lines from the famous ‘Kanada raja pandharicha’ go:

(The one that savours the ‘kheer’ dessert of Namya (sant Namdev), herds the cattle of Chokhoba (Sant Chokhamela), the Parmatma o Purandhara is the saviour of Damaji (sant Damaji)).

A market place it is, indeed.

Like Sant Balakadas describes in his abhang Namacha Bazar, this is a bazaar (market) of his name where ‘Namacha geti Nama Cha dethi‘ (His name is taken, his name is given), the only currency is the name of Vithala.

But this year, it will be just a handful who will be there ritualistically. As the pandemic permits not this pilgrimage.

The silence this Ashadha ekadashi will be eerie, Vithobha will surely miss his devotees, but they may not.

For wherever they are, their very being will echo ‘Vithala’ and the saffron flag that flutters with its pole resting secure on their shoulders will uphold Dharma in all its grandeur for generations to come.