Athi Varadar: How The Tamil Nadu Government Has Mismanaged A Once-In-40-Year Event 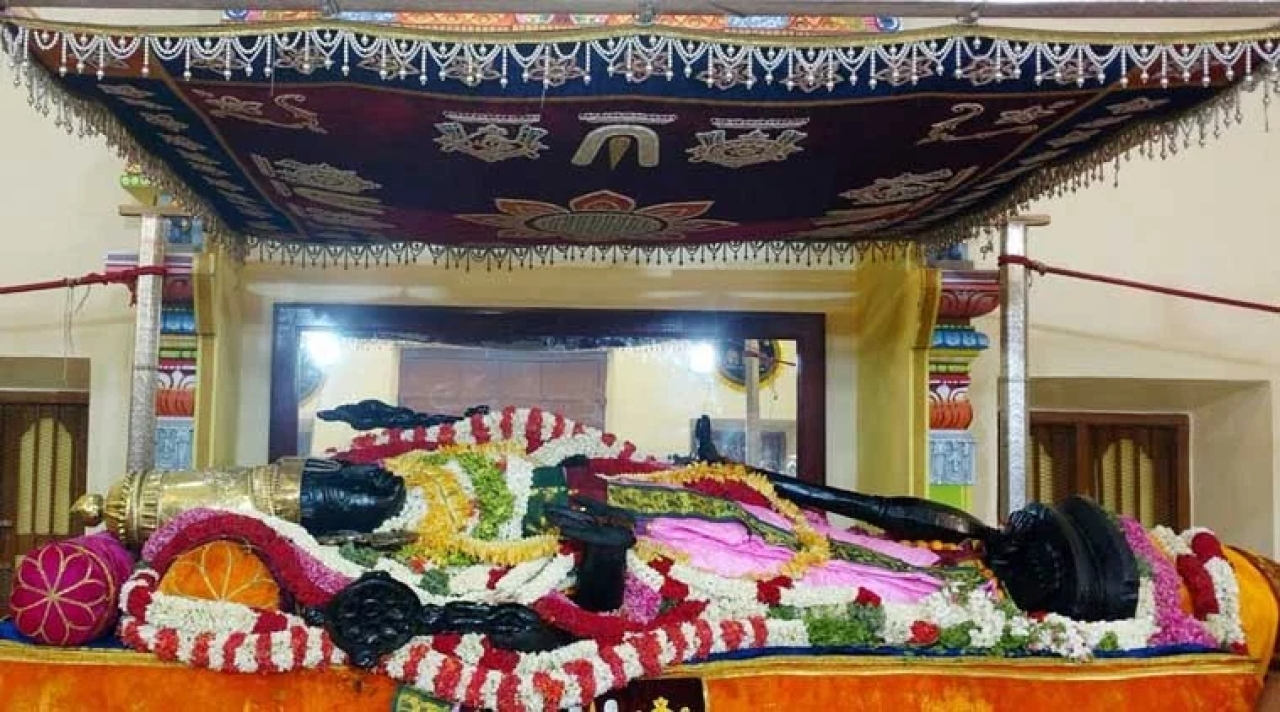 Currently, Tamil Nadu is witnessing an event that occurs once in 40 years. The event — a very important one for Vaishnavites — is called Athi Varadar darshan and is taking place at the Sri Varadaraja Perumal Temple in Kanchipuram, about 90 km from Tamil Nadu’s capital Chennai.

Athi Varadar is a huge nine feet murti (idol) of Perumal or Lord Vishnu made from the wood of the fig tree (athi in Tamil means fig and the murti derives its name from that). This murti was previously worshipped in the garba gudi (sanctum sanctorum) of the temple until the 16th century.

As Muslim rulers invaded the region, the temple priests and authorities decided to hide the Athi Varadar murti. They got a silver casket prepared in which Athi Varadar was placed before it was hidden inside the temple’s tank. For years, no one knew where the murti was because the two key Dattareyas who had placed the murti secretly in the temple tank had died without revealing the secret.

Another murti — of Devaraja Perumal — was commissioned and used as the alternative to Athi Varadar. In 1709, the temple tank was emptied and the Athi Varadar murti was found in its silver casket. The temple authorities then decided that the murti would, from then onwards, be brought out only once in 40 years and kept for public darshan for 48 days.

This year happens to be one when Athi Varadar offers his darshan. The murti was brought out on 29 June and has been kept for darshan from 1 July, for 48 days. Usually, the murti is first displayed in a reclining or sayana position and then in a standing posture, for equal number of days.

This time however, for reasons unknown, Athi Varadar was placed in the reclining pose until yesterday (31 July). From today (1 Aug), Athi Vardar will be in a standing posture.

So how has the Tamil Nadu government handled this once-in-40-year event?

A fortnight ago, R Parthasarathy, a devout Vaishnavaite who thinks it is a must to worship Athi Varadar, had a darshan. “My wife and I left home at 3am in the morning and reached Kanchipuram at 5am. We parked our car on the outskirts of the town and hired an autorickshaw to the temple. We were in the queue by 5.20 but we got Athi Varadar darshan only at around 8.30,” he says.

“The darshan was not a satisfying one as it was from a distance,” complains Parthasarathy. 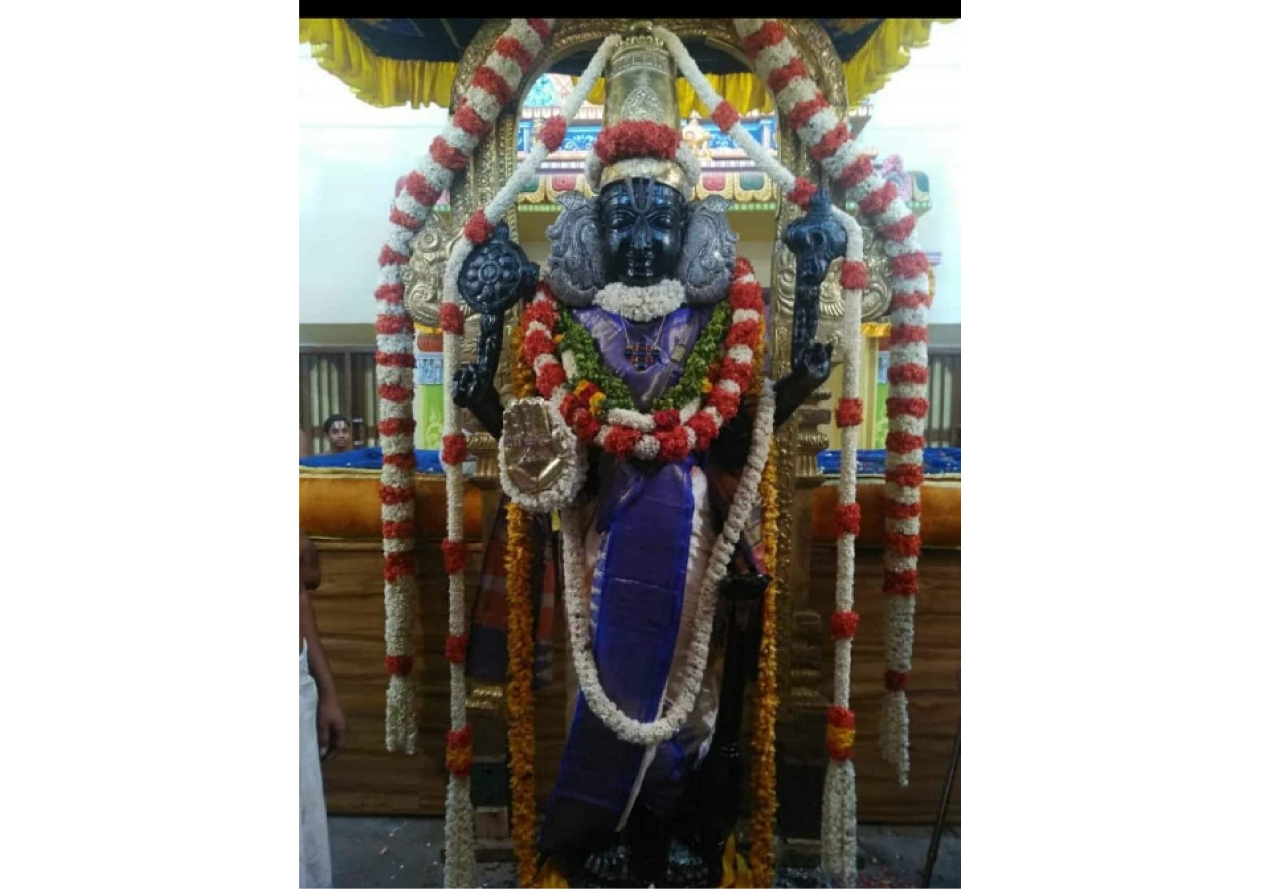 Athi Varadar in a standing posture. The idol has been kept in this posture since this morning.

One of the biggest complaints from devotees is that they are allowed to have only a glimpse of the murti, especially those who opt for free darshan. “The murti is kept in the Vasantha mandapam (Spring hall), which cannot accommodate the huge rush to have a darshan of Athi Varadar,” said the Tamil Nadu Chief Minister, Edappadi K Palaniswami.

But devotees are upset that those availing special tickets or VIPs get to have a close up darshan of Athi Varadar. Palaniswami has told the media that steps would be taken to put up the murti at another place for better darshan but nothing beyond that has happened.

There have been people like 50-year-old R Bhuvaneswari, who have taken a bus at 10pm from Chennai to travel to Kanchipuram. She and her friends queued up at 1.30am in the morning for the darshan of Athi Varadar. The temple opens for devotees at 4.00am but it was 8.30am by the time Bhuvaneswari and her friends got their darshan.

There are a few lucky ones too who have had a quick darshan. On 24 and 25 July, a number of people who went to have a darshan of Athi Varadar got it within an hour or two. On 31 July morning, quite a number of people got darshan within two hours, before 8am. “We came and stood in the queue around 4pm on 24 July. We finished getting darshan by 4.40pm,” says K Ekambaram from a Chennai suburb, adding that he went for a darshan the next day too, when it took about one and a half hours.

Within a month, nearly 4.5 million people have worshipped Athi Varadar but overall, there is criticism of the Tamil Nadu government for mishandling the event that happens once in 40 years. The ire is directed more towards the state’s Hindu Religious and Charitable Endowments (HRCE) department that manages the affairs of the temple. The department is already under flak for many irregularities that have been committed with regard to temple properties and funds.

The state government has extended online facilities for special darshan but many complain of poor connectivity or slow process. The ones who are happy and have no complaints are those getting access to VIP darshan, that includes a notorious rowdy-sheeter from Madurai who claims to have been reformed now.

The event has seen many Dravidian leaders and their families, including Dravida Munnetra Kazhagam (DMK) President M K Stalin’s wife Durga, visit the temple for Athi Varadar darshan besides Palaniswami, Deputy Chief Minister O Panneerselvam and a host of other state ministers.

“The state government and HRCE department have underestimated the crowd that will throng to see Athi Varadar. It has resulted in poor preparations to meet the surge,” says Gopinath J from Chennai who has been discouraged by the feedback he has got on the event.

“Things seem to have improved somewhat now. When I visited, mobile toilets had come up at some places and volunteers offered water to drink,” says Ekambaram.

Reports said Kanchipuram began stinking within three weeks due to lack of these basic facilities. “People who couldn’t stand in the queue for long struggled to find toilets. Some of them used trees or bushes as hideouts to answer nature’s call. It was pathetic,” says a woman, who visited in the second week, not wanting to be identified.

“The stench was unbearable for people standing in the queue and moving towards the temple,” said a youth.

“When I visited, bleaching powder had been sprayed near the temple and chlorine smell overwhelmed everything. However, I am told this was done on the eve of the Chief Minister’s visit on 22 July,” says Ekambaram.

Poor crowd management is seen as the biggest failure on the part of the Kanchipuram administration and the Tamil Nadu government. “The administration failed to anticipate as a result of which Kanchipuram suffocates,” says R S Sekhar, a local.

Poor crowd management has actually led to the death of over half a dozen people due to suffocation, though the Tamil Nadu officials say that all the deaths cannot be attributed to this factor.

Following the deaths, the district administration, on 20 July, urged the aged, physically challenged and pregnant women to stay away. However, within a couple of days, following some strong criticism against the move, the administration made arrangements for a special darshan for them.

Wheel chairs to help the disabled and the old were made available and more policemen were assigned from across the state to help the administration and devotees. Policemen — responding patiently to complaints and queries from devotees — have been the highlight of the event this year.

This week, the district administration began regulating the crowd from the entry point to the town. Devotees are detained at the entrance to the town until the surging crowds of those who had previously entered vacated it.

There are some who recall the previous event in 1979. “I remember visiting it then, when there wasn’t such craziness or crowd. It was a very quiet event then,” says Ekambaram. There are none now to recall the event that occurred in 1939.

“It was a darshan with 20 people around in 1979. This time, there were several thousands behind me and many in front of me with so much noise,” said Pradeep Padmanabhan, now living in the US, to The Hindu after having a darshan.

Critics say media probably has had a role in the turnout this year, pointing out that then television and radio were solely under government control. “You very well can imagine what sort of coverage would this event [have] got then!” says a critic.

Tamil Nadu isn’t a state that doesn’t see such important events often. In fact, it conducts Mahamaham at Kumbakonam once every 12 years, with the last one having taken place in 2016. For the 2016 Mahamaham, about 4.5 million people visited Kumbakonam with 2,50,000 people visiting on 22 February 2016.

“Tamil Nadu officials should have looked at these statistics at least for preparation. Sadly, they have missed an opportunity,” says Gopinath, adding that Kanchipuram could have been turned into a tourism hot spot given the number of important temples in the town. Unfortunately, it appears that the Tamil Nadu government, the HRCE department and the Kanchipuram administration have missed a golden opportunity.