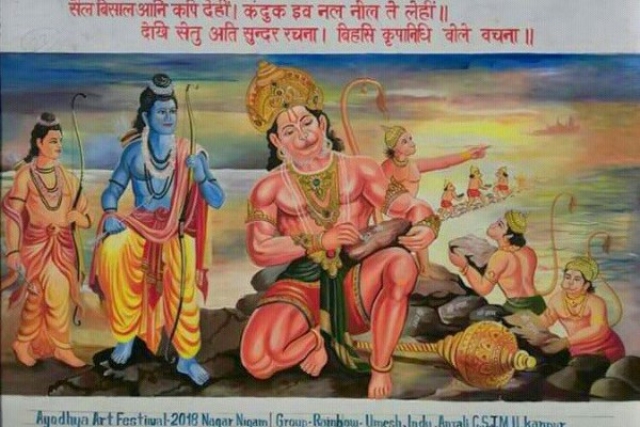 Wall art as part of the Ayodhya Art Festival

Any mention of Ayodhya, the city of Shri Rama, evokes a rush of emotions. It takes us back to the time we first read or heard the Ramayana, where the first few chapters detail the grandeur of the city. The story of Rama is incomplete without the significant role of the city and citizens of Ayodhya. Naturally, Rama’s city must have been the top pilgrimage site for crores of Indians. Yet, barring the devout, the city does not attract pilgrims in large numbers from across India and abroad unlike other temple towns in Uttar Pradesh, like Varanasi and Mathura. Nor was Diwali, the festival to celebrate Rama, Sita, and Lakshmana’s return to their hometown, ever celebrated at the grand scale that it deserves. But when photos of Ayodhya’s Deepavali celebration of 2017 made its way around, observers noticed that a new leaf was being turned. Irrespective of when the grand temple at Rama Janmabhoomi will be built, Ayodhya seems to have embarked on an urban renewal mission based on its indisputably rich cultural heritage.

Building on the dedicated initiative taken by Uttar Pradesh Chief Minister Yogi Adityanath to celebrate Deepavali in Ayodhya, a group of prominent citizens, along with the personal support of Mayor Rishikesh Upadhayay, implemented a novel idea in the temple town. The Ayodhya Art Festival was a public art competition that concluded on 14 October and brought together fine arts students from across Uttar Pradesh to paint 100 walls of the city with scenes from the Ramayana. The initiative was built on the understanding that history and heritage cannot be restricted to museums or built structures; they need to be experienced in shared spaces, too. Our cities, with their ever-increasing population and the resulting problems, do not adequately factor in the importance for common spaces that celebrate culture and heritage year-round. Public art has specifically been a powerful tool for urban renewal, not limited to but especially in cities with a strong historical and cultural heritage. It helps us reimagine urban renewal—not only as a phenomenon to sustainably rebuild the city but also as a way to reshape people’s relationship with the city itself. The Ayodhya Art Festival can be a significant step in this direction of truly investing in urban renewal to breathe life into a city that has a cultural history unlike any other.

Shantanu Gupta and Pushkar Sharma, co-curators of the festival, highlighted the Festival’s grand success in not only attracting 200 students to paint the city with colours of Rama but also of the residents’ interest in preserving and cherishing this new addition to their beloved city. “The painters and organizers were overwhelmed by the support shown by the residents. They came up to us and promised to protect the art done on the walls. Late at night, when murals were still a work in progress, many citizens of Ayodhya took selfies and shared their awe with the artists. This gives us renewed hope in the importance of such initiatives that focus on using public art to make heritage, culture, and history a part of a city’s daily ethos.” The reception of the Ayodhya Art Festival by locals and participants is a glimpse of the immense potential in pursuing urban renewal with an eye on cultural heritage. The interest displayed by the residents in preserving the murals reiterates that such initiatives go a long way in building a strong sense of ownership and pride about a city and its history.

A more tangible benefit, of embracing heritage-driven urban renewal, is the impact on tourism and, therefore, the local economy. Many of India’s cities are rich centres of history, religion, spirituality, and tradition. In cities that are already crowded tourist destinations, urban renewal should empower local communities to protect their heritage while sustainably reaping the benefits of tourism. Whereas, in cities that aren’t as well-known, preserving, embracing, and cherishing the cultural heritage would be a positive step in promoting tourism, and therefore, contributing to the local economy.

Speaking about the success of the Festival, the first-ever Mayor of Ayodhya (the city became part of a municipal corporation in 2017) noted: “The festival is only the beginning to what we have planned to make Ayodhya truly embrace and celebrate its icon, Bhagwan Shri Ram. As part of the festival, participants were also given an immersive experience in the culture the city has to offer. They were party to Ram bhajans being sung at local dharamshalas and witnessed the traditional performance of Ram-Leela. In 2019, thanks to the initiative of our Chief Minister, we will see a grander Deepavali on the ghats of river Sarayu and will look forward to hosting more visitors to celebrate with us this time around.”

As a country, our journey towards embracing and actively preserving culture and heritage as an integral part of a city’s existence has only begun. Metropolitan cities such as Delhi, Mumbai, and Hyderabad, where historical monuments are at large, actively invest in preservation. Ahmedabad has taken us a step further with its earning of the UNESCO’s World Heritage City title in 2017. Further tapping into our rich heritage for urban renewal, especially in cities like Ayodhya, can set us apart from other urban centres in the world. Policymakers can look towards not just preserving but adapting our cultural heritage while they embark on building smart, sustainable cities of the future. As Rama’s city has shown us, urban renewal coupled with preservation of our rich cultural heritage is not an added responsibility; it’s a transformative opportunity, for it has the potential to truly improve the quality of life.