Between Blasphemy And Hate: Sharpening The Hindu Response 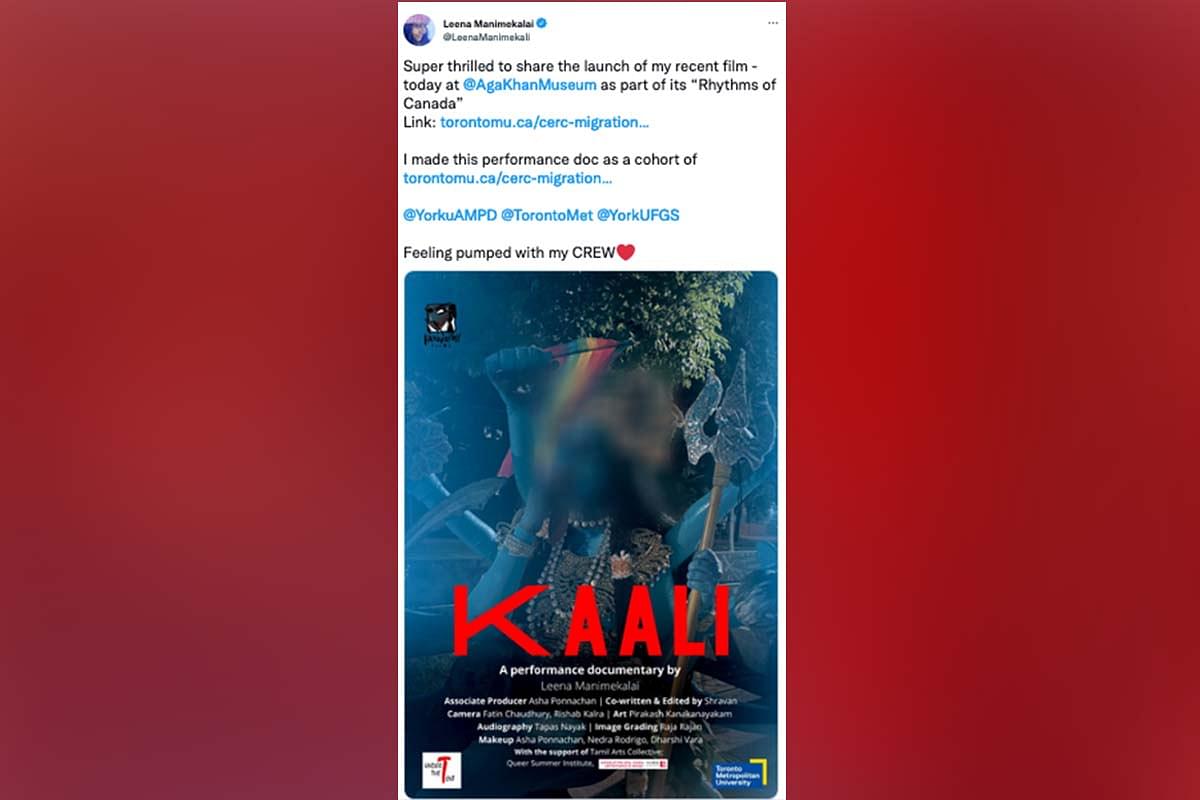 A controversy has erupted over a documentary poster showing a woman dressed as Kali smoking a cigarette.

The timing is quite important and strategic.

Nupur Sharma, a former national spokesperson of BJP, has been facing international heat over her comments on Mohammed, whom Muslims regard as their prophet.

Going for the jugular even against a secondary level of freedom of expression, we have seen inhuman executions (not just murders) of those who even express their support for Nupur Sharma against the threats to her life that she has been receiving.

This is in stark contrast to what has been happening against those who portray or refer to Hindu Gods and Goddesses obscenely. Mostly there have been no violent reactions, leave alone murders. There has been online trolling at the worst. People see this difference.

It is in this context that the poster controversy has erupted.

Leena Manimekalai reinforces the negative stereotypes of Hindu society and culture which the colonialists implanted in the mediocre academic psyche.

Now we have to differentiate between blasphemy and spreading hatred. They both can overlap, but both are different.

For example, if I state that a particular religious character in a myth or a religious history is bad, with facts, then that is a criticism that can be hurting to the believers and may face allegations of blasphemy. If it is empirically a fact, then I have the right to state that, particularly in response to a provocation.

But if it is empirically false, then I owe an apology in public. Otherwise, compelling one to apologise for 'hurting the religious sentiment' is the ugliest assault on the freedom of expression - a core principle of a democratic society.

Fortunately, the Hindu civilisation does not have the jealous god of monopolistic religions. Hindu Gods and Goddesses are not the god of one book whose existence is threatened by the discovery of the next hominid fossil. Hindu Gods and Goddesses are not the gods whose relevance becomes laughable and meaningless at the reception of the first meaningful electromagnetic signal from outer space received in a radio antenna.

So Hindus are disadvantaged in the politics of blasphemy because our civilisation views blasphemy as juvenile stupidity and not as an unforgivable sin.

That said, this civilisational high ground should not become an opiate for our people against the hate speech and negative stereotypes woven around them.

While blasphemy may or may not be an offence, depending upon its veracity, hate speech in a healthy, vibrant, pluralistic democracy is dangerous and should be stopped. Most attacks on Hindu Dharma fall under the second category though we tend to associate it with the first as a knee-jerk reaction, thus harming our own case.

The readers of this article can expect the response from the other side - 'But Kali is a non-Brahminical Goddess appropriated by Aryans' to ' but does not in villages devotees offer arrack and meat to the Goddess' kind of arguments. Kali is a Hindu Goddess and as much Vedic as she is tribal. In fact, Vedic is tribal and vice versa. Yes.

Some devotees offer the Goddess arrack and liquor, meat and maybe even a cigar. But that happens in the sacred context of veneration of the devotee and the Deity, not in the context of a commercial informer to the colonial academic institutions.

That is why one should remember Mathamma when one looks at Kali.

Leena Manimekalai, in this regard, is a repeat offender. Western academia and media have a strong contempt for Hindu India. She fully uses this deep-rooted colonial contempt and makes it her capital. When writing 'Breaking India,' this writer came across a complete episode of how she operates. In footnote 54 of chapter 10 the reader will find this:

... a documentary on ritualistic prostitution and child sex-abuse allegedly prevalent amidst a particular Dalit community in Tamil Naadu. (www.kanavuppattarai.com, 2009) (Downloaded: October 2009. This domain name expired in December 2009). The film was shown across the US, in chapters of the Indian Muslim Council. The authenticity of the documentary has been highly disputed. It is actually a one-sided propaganda with no opposing viewpoints presented. According to Dayalan of Arundathiyar Liberation Front, a Dalit organization, the girl portrayed as Mathamma in the cover of the CDs and website is actually a girl named Amutha who was studying in ninth standard then. The community leaders as well as leading Dalit leaders of Tamil Nadu investigated the place of documentary and contested the authenticity of the documentary. They wrote in the report that while the Dalit communities were suffering from poverty and diseases, certain NGOs are trying to make use of the situation and convert even their deities into sex workers. (Puthia-Kodangi 2004)

The maker of this vile and notorious documentary was Leena Manimekalai.

The poor girl whose face was featured in the documentary would not know how she was being shown to the Western audience. Dayalan himself was harassed, but he remained strong in his stand.

This is a crime. This is a sin. This is worse than blasphemy. This is negative stereotyping of Hindu society through demeaning a community and their history - a community that is part and parcel of Hindu society; a community that has been a victim of economic and social exploitation that came from the social stagnation effected by colonialism. These documentaries and financing these documentaries serve a deeper sense of guilt alleviation for the rich. 'We were the harbingers of civilisation to such heathens'. So they pay. So the documentary-making sepoys benefit.

This is the deeper shame. Then a commercial movie was made. When Dayalan heard that it was using the concept of Maathama, he rushed with his opposition, forcing the director to abandon the use of Maathama and make a u-turn.

We need to fight this. We are not fighting for a religious belief or an insult to our Goddess. Our Goddess cannot be insulted. We are fighting a still deeper issue. We are fighting hate propaganda that demeans a people: the Hindus. It was many such demeaning stereotypes that usually pave the way for Holocausts.

That is why the attempts like Kaali documentary, which is done to demean Hindu society and Hindu Dharma, should be fought.